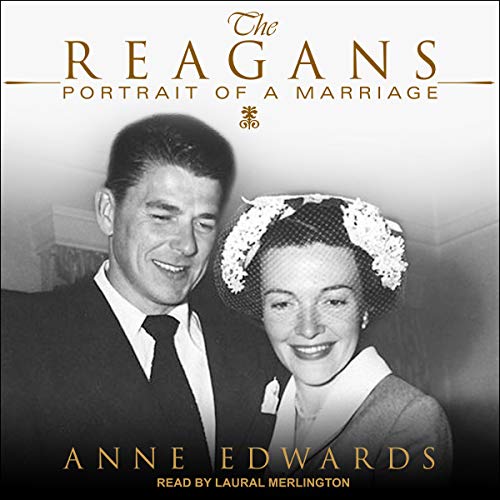 By: Anne Edwards
Narrated by: Laural Merlington
Try for $0.00

He was an actor, newly divorced, whose controversial tenure as president of the Screen Actors Guild was drawing more attention than his fading film career. She was a contract player at MGM, unmarried and rapidly growing too old to play the starlet. It was time, she decided, to settle down and become Mrs. Somebody Important. So Nancy Davis contrived an introduction to Ronald Reagan, and the Reagans' march into history began.

The Reagans is a penetrating portrayal of one of the most powerful couples of the 20th century. Distinguished biographer Anne Edwards paints the first in-depth, intimate portrait of the man who became our 40th president and the woman without whom he might never have reached such heights. It was a dramatic love story from the start: Nancy was always first in Reagan's thoughts, and he was paramount in Nancy's actions. But this obsessional love had a darker side for the four Reagan children. Anne Edwards brings the Reagans' dysfunctional family life into sharp focus, along with a fascinating array of supporting players such as Reagan's evangelistic mother, Nelle, Frank Sinatra, and Gerald Ford.

What listeners say about The Reagans