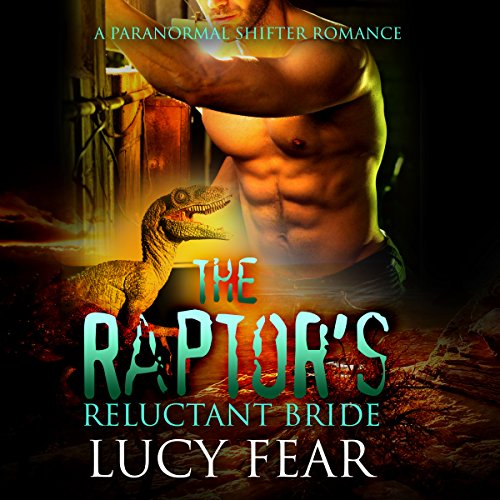 Stha was the priestess of her people and her people were shape-shifting Velociraptors that had existed ever since the Jurassic era.

However, with the future of her people under threat, Stha had to consider combining with a rival tribe of Raptors who were owned by the handsome Rath, something she always considered to be a last resort.

This was because the only way this could possibly happen under Raptor law would be if the two of them were married together in a special sacred ceremony.

So when Stha reluctantly became the Raptor's bride she knew it was not going to be easy but nothing could have ever prepared her for what was to happen next....

This is a paranormal shapeshifter romance packed with epic adventures, exciting drama and hot sensual scenes between two reluctant mates.

I received this audio book for an honest review. I have never read read/listened to a story about dinosaurs. I had a hard time getting into this book. Maybe if it had been dragons i could have enjoyed more. The story line was good and the narrator did a great job. But this type of shifter is not for me.

This book was a good transition from the traditional shifters. I kept trying to picture stripes and feathers. Finally had to look up raptors to get a feel for what they looked like. the narrator did a good job. the story dragged at the beginning but it picked up the pace and moved on into becoming a good story. I liked the four main characters and I liked the interjection of the little girl raptor who whispered. You know that she will know you are lying. Overall a very good read.

A Different Type of Romance

I wanted to listen to something different and well I got it! I enjoyed the book it might be a little hard to get into just because the characters are shape shifting into something that I really don’t have much experience with so it’s harder for me to imagine.. I did have some trouble trying to imagine what the raptors looked like when they said feathers and stripes I was confused. The storyline and plot were good the book had a very exotic feel. The narrator did a great job . Overall, if you want to try a different unique romance book this was fun.
"This audiobook was provided by the author, narrator, or publisher at no cost in exchange for an unbiased review courtesy of Audiobookboom dot com."


Stha, the female lead, decides to make a deal with Rath, the male lead and they agree upon a type of "truce".

It was a reluctant agreement at first but then the main leads, develop respect and feelings for each other.

This was a different take on Shifters, a decent plot and likable characters,

Throw in a little bit of adventure and the author has created an overall entertaining read.


Marie Smith did well with the narration.