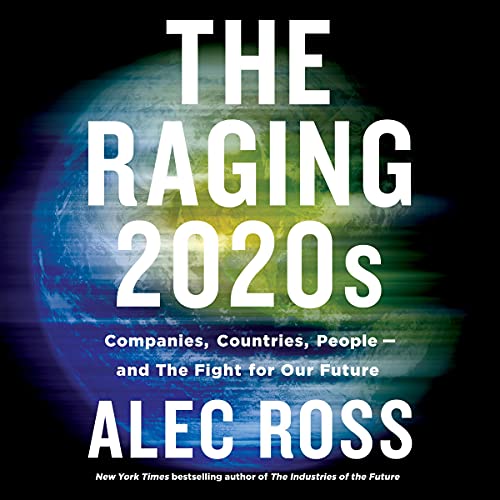 This program is read by the author.

In the face of unprecedented global change, New York Times best-selling author Alec Ross proposes a new social contract to restore the balance of power between government, citizens, and business in The Raging 2020s.

As the market consolidates, the lines between Walmart and the Halls of Congress have become razor-thin. Private companies have begun to behave like nations, and with the government bogged down in bureaucratic negotiations and partisan wars, people look to nimble powerful firms to solve societal problems - and to be our moral standard-bearers. As Walter Isaacson said about Ross’ first book: “The future is already hitting us, and Ross shows how it can be exciting rather than frightening."

Through interviews with the world’s most influential thinkers and stories of corporate activism and malfeasance, government failure and renewal, and innovative economic and political models, Ross proposes a new social contract - one that resets the equilibrium between corporations, the governing, and the governed.

A Macmillan Audio production from Henry Holt and Company

What listeners say about The Raging 2020s

A Broader View of Corporate Success

I enjoyed how this book pulls together a broader view of what it means for a corporation to succeed, beyond the simplistic "shareholder value" that has governed things for too long. Taking all stakeholders into account - employees, suppliers, government/taxes, local communities - is how we need to view success. As citizens, we need to actually see corporations as another type of governance, parallel to our elected officials. The policies of Amazon or Walmart or Goldman Sachs affect us just as much as the policies of our own government - and those corporations have influence over many countries' citizens, not just one.

I especially like that Alec Ross frames the problem and his ideas in a fairly neutral manner; not trying to point at anyone as the villain or scapegoat. This is especially helpful because we will need everyone's help to make his suggested changes.

Personally, I think that the metric for stakeholder value might turn out to come from the Future-Fit Business Benchmark, which has been created by a cross-functional group of forward thinking people around the world.

I hope this book becomes a clarion call for all citizens and corporations and governments to flip the ground rules (i.e. legislation) to ensure that companies are taking into account their entire shareholder "portfolio."

Excellent Book on Some Much Needed Basics

A lot of this stuff is common sense, but the book serves as a good refresher on some pretty important common sense topics, and the topics he mentions are so wide-ranging and diverse, that at the very least this book will make you a smarter-sounding dinner companion. You won't learn anything new or revelatory, but you'll keep your smart friends.