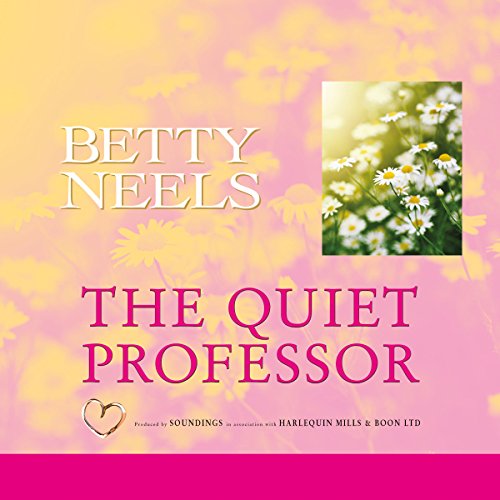 By: Betty Neels
Narrated by: Anne Cater
Free with a 30-day trial

Megan thought she had it all - a good job, a caring family and a fiancé whom everyone agreed would make her a wonderful husband.

But then her perfectly constructed world fell apart, and she found that her one hope was Professor Jake van Belfeld. He seemed determined to rebuild her life - but why was he taking such a personal interest in her? He couldn't think that her heart needed his attention, too, could he?

What listeners say about The Quiet Professor

Narrator's voice was cozy and her depiction of the characters was warm, however I couldn't seem to shake of the sense of the hero being elderly. I've read the book in print and didn't have that problem. Also, there's an incident in the book right near the end that is just too far-fetched for me, but oh, well. I'm a Betty Neels fan and will listen to this book again anyway. This is the first Neels book I've found on Audible, and I hope there will be more, especially if they vary the narrators.

What made the experience of listening to The Quiet Professor the most enjoyable?

I am a Betty Neels fan and have read almost all of her books. This title was one of my favorites. I was very disappointed with the narration. I felt that it didn't fit the book.

Who would you have cast as narrator instead of Anne Cater?

Have no idea. I am also a fan of the Royal Spyness series. That narration fit the story.

No, I think I have stated my case. I sincerely hope I did not offend anyone.

Betty Neels is always good for a fun read. Her characters have some depth and there aren't any "embarrassing" scenes. While beauty and fashion have their place, the emphasis is places on the character of the individuals, which I really like. While the narrator wasn't my favorite of all time, she does a good job of capturing the personality of the characters and portraying their emotions. She also has inflection throughout her reading as opposed to a monotone. The various voices for each character were a little harder to distinguish, but I was able to follow along and didn't zone out.

Enjoyed the easy read. A book very simplistic in the telling. Always enjoy this author.

It was great to hear a story I have read several times. Great story to read.

Loved it. I liked the accents. It made it more personable and real. I wish Audible had the other Betty Neels audio books as well.

Betty Neels at her finest

A gorgeous reading of Betty Neels story. A guaranteed Happily Ever After.
Thank you for this audiobook!

I loved being able to listen while I did other things, mostly crocheted. Overall the performance was great but there was an occasional word that I couldn't hear. Thankfully not very many and my hearing is not very good.

Would you consider the audio edition of The Quiet Professor to be better than the print version?

I think the audio edition adds to my enjoyment of the story because I can hear accents of the various characters which I just cannot add in my mind as I read it. It's not better than the print version, but it adds another dimension. I would love to find more Betty Neels stories in audio version.

Well, I think it would have to be the Quiet Professor, Jake van Belfield. He is just so solid, reliable, large and good looking and determined to have his own way. He doesn't force Megan to do to anything she doesn't want to do, but he just manages to convince her that his quietly suggested ideas really would be for the best. The reader believes that if she decided not to go along with him, and he thought she wouldn't budge, he would accept her decision. She just seems to know that he is right about how to get over her "cracked" heart.

I love her voice, her pacing of the narration, her manner of acting each character so you know who is talking by the way she changes accent, pitch, pronunciation and so on. She's a wonderful reader and actress.

If you could rename The Quiet Professor, what would you call it?

I'm looking forward to more of Betty Neels novels in audio edition. I hope I don't have long to wait.

This is one of my favorite books i would love to get all the audio book .need to know the place to go so I can order them .if you can help me . Hunt Lois 2016@gmail.com thank you