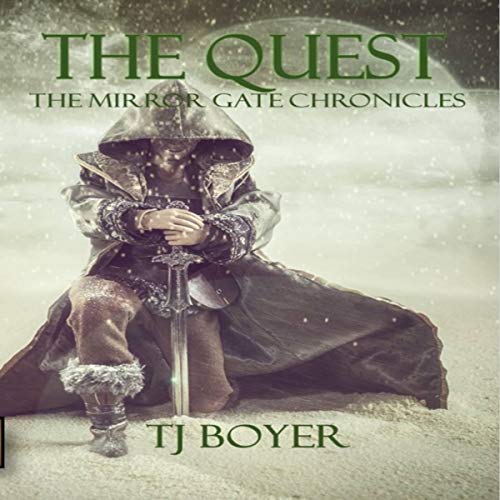 By: TJ Boyer
Narrated by: Michael Christopher Gines
Try for $0.00

Nogar the golden dragon rescues Shaméd after his family is murdered by an evil, black dragon. He takes him home to his own planet, where Shaméd encounters trolls, elves, dragons, and other beings all living in peace. He begins a training ritual, and after many years he advances to be the best swordsman on that world and masters the first 10 levels of magic.

Shaméd travels to another planet in his role as one of the Thirty-Six, via a portal called the Mirror Gate, searching for lost knowledge and looking for what Nogar calls the “ONE”. As Shaméd acquires new friends, he embarks on his mission to find the information he is after. He encounters an evil that is attacking the people.He decides to change the rules he was trained to obey and he embarks on a new mission - one to save the people of this world and to help these people in their fight with the evil force that is secretly trying to take control of them and make them slaves.

A Definite Read for Adventurers...

Personally, I really do like this book. In fact this is the first review I've left for a book because I feel the author deserves some opinions. Anyway, the plot was good but the book itself seemed a little fast and kind of jumpy. At times I felt it hard to tell who we were following at that particular time and it seemed like we kind of skipped through time, and what I mean by that is I have absolutely no idea how long each event in the book took or how far apart they were. Perhaps that's just me not paying attention though. At any rate, book was great and would be 5 stars if the character PoV change issue mentioned above was addressed. and I can't wait to continue the adventure!

I had never listen to an audio book. I thoroughly enjoyed it. I enjoyed the characters and the interaction. The narrator did an excellent job with the characters voices. Once I started listening to the book I found myself not wanting to stop listening. Thank you TJ Boyer

To expensive for a six hour book

Also would like to point out that’s it’s kind of hard to follow. I am also obsessive compulsive so I have to force myself to finish this book. I will not purchase another