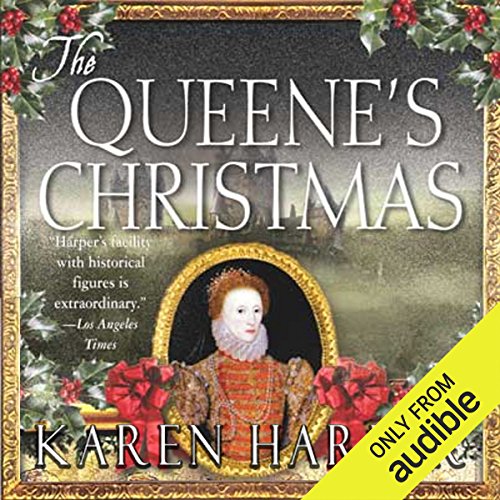 By: Karen Harper
Narrated by: Katherine Kellgren
Try for $0.00

An old English Yule has never been merrier or more mysterious. A New Year's celebration has never looked more joyous but been so potentially deadly.

Fearing the 12 Days of Christmas of 1564 may be the last for her ailing, elderly friend, Lady Kat Ashley, Queen Elizabeth decrees a nostalgic, old-fashioned holiday. Delicious dishes for the table, holly and ivy, caroling, wassailing, mumming, and a Lord of Misrule to oversee it all are in the recipe for the revels. But one of the queen's kitchen staff is found as dead as the ornate peacock he was preparing for the feast.

When the Thames freezes over and Londoners take to the ice for an elaborate Frost Fair. Elizabeth of England must outfox the diabolical demon who would kill not only the spirit of Christmas but the queen.

What listeners say about The Queene's Christmas

I'm not usually a fan of the early times in English history, but I read this book at the request of a friend who really loves these books. Surprise, surprise--I really enjoyed this book immensely!! This is a mystery involving Queen Elizabeth and her court in 1564. They are preparing to celebrate Christmas in the traditions of the time, to the definite dislike of the puritanical Protestant church leader. There is also the continuous conflict between sisters, Queen Elizabeth and Queen Mary of Scots, for throne of England.

At the start of these celebrations, Master Hodge Thatcher, Dresser of the Feast, is found hanging in the kitchen, dressed in the peacock feathers meant for the roasted bird. Queen Elizabeth is convinced that he was murdered and starts the investigation into his death. Then, the next days of the celebrations finds other deaths related to the each days activities. Who can the Queen trust? Clues seem to implicate those closest to her. The clues are truly interesting and red herons kept the story flowing. Queen Elizabeth's characterization is wonderfully done.

What I especially liked about the story was the deft way that the author used, and explained, so many traditions of the times, including an old time food recipe at the beginning of every chapter. This is the sixth book in this series. The excellence of this book is best proven when I say that I actually believe I want to rest of this books!

The reader added a great deal to the enjoyment of this book!!

Karen Harper at Her Best

My favorite Elizabeth I mystery; loved recipes included at beginning of each chapter. The mysterious deaths were so cleverly conceived and the solution was masterful.

I was captivated the whole time! I wish there is a tv show called "Th queen".

I was a good book, not great.

If you could sum up The Queene's Christmas in three words, what would they be?

The plot kept me interested but not on the edge of my seat.

What does Katherine Kellgren bring to the story that you wouldn’t experience if you just read the book?

Katherine is a good reader. She did a fine job.

I had no extreme reaction to the book. It was just a good Christmas read, and that was enough.

In the tradition of good historical who-done-its

Would you consider the audio edition of The Queene's Christmas to be better than the print version?

It was difficult to not be distracted when driving & listening to the start of each chapter as they begin with a 'trad' recipe for the delectables of Christmas. Harper's series of mysteries are delightful and tickle the mind wondering as you go about what is fact and what is fiction. At the end there is always a summary to put any worries to rest. I applaud her ability to weave a good story around figures known and not. It made the hours of driving go by in a flash (and prompted some follow up research into Elizabethan culinary history).

This was not a cliff hanger, per se, but this was not a problem as it did make you think about who-do-it and a motive.

What does Katherine Kellgren bring to the story that you wouldn’t experience if you just read the book?

It was well narrated without being too dramatic or, worse, monotonic.

read these years ago and found them again on here, performance is great. the authors notes are always informative.