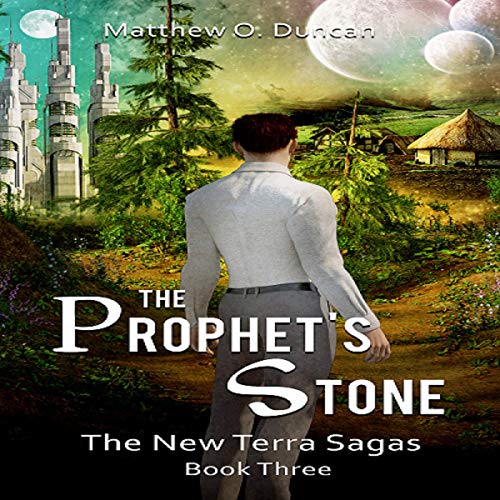 It had been ten years since Roy came to New Terra. At the conclusion of the great interstellar war against the Serpent People, Roy went from being an ace fighter pilot to a simple farmer, married to his beloved wife Katreena and father to their three beautiful children. He had discovered a happiness that he had long given up on having again in his lifetime. However, their lives were overshadowed by a dark prophesy.

About 500 years in the past, Queen Deoiridh predicted not only Roy's arrival on New Terra but warned that he would face the greatest danger yet to come. The prophet's stone had shown her a path Roy must embark upon, which would lead him to find an ancient city and the heart of the landstones.

Both Roy and Katreena were prepared to stand against any foe and make any sacrifice if it meant saving their family. Yet, not all challenges come from monsters and enemies. Roy must decide how to change the course of events in both the present and the past.

I discover this book enlightening

It has valuable content for all. I'm happy with this guidebook and listening step by step. I want to prefer this guidebook for everyone who is searching as like this guide.

I’m surprised they decided to call this book part three of a series. It’s more of a stand-alone. It does have some of the same characters from the first two books, but it morphs into a spin-off with new characters. It’s a wonderful book with a compelling story, honest characters and an incredible performance by Dave Cruse. Having read the first two books, I knew about the universe, but even if I hadn’t, I would have not missed anything as it takes place sometime after the last one and with an entirely new storyline. Kind of like Star Trek TNG. You can follow it without any difficulty even if you never watched the original.