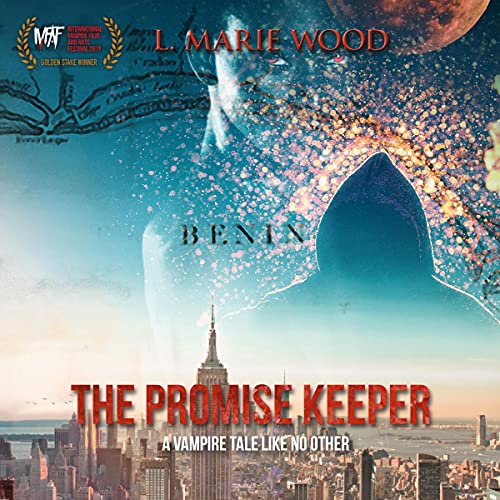 A young girl, on the cusp of maturity, in what is now known as Benin, West Africa, is seduced by a beautiful stranger, a man the likes of which she has never seen before. Their encounter changes her forever.

She becomes an asiman, a vampire, one of the undead. The Promise Keeper comes to her, willing her to do his bidding; to keep an unspoken promise. He probes her mind and plants suggestions, so she will follow his plan, until she fights back.

She runs, her travels taking her to Europe and the Caribbean over centuries to escape him. She finally settles in New York City, convinced that she has eluded him, until she falls in love.

The Promise Keeper is a story of love, despair, murder, and deceit. It is also a vampire tale like no other. Could you keep this promise?

What listeners say about The Promise Keeper

The promise Keeper written by L. Marie Wood and narrated by Brenda Scott Wlazlo is a book about vampirism, evil, and a promise. I have read a many vampire related books, from my all time favorite, Salems Lot, to classics such as Dracula and I am a fan of Anne Rice, so how does the promise keeper hold up to such heavy completion, I recommend checking out this audiobook, it is a unique take that explains the origins of vampirism in a simple yet satisfying way without losing the element of mystery which is hard to do.

The story follows two woman, one a vampire named Angie and a non vampire named Lucky, both are in death row for murder and most of the books are based on reflections and stories between these two women while they wait to get executed. I know you must have questions right off the bat as I did; but they are answered as you listen through the story. As we learn about how they got into their current situation and the evil entity that haunts them both, we learn about the promise and what it takes to keep it.

I enjoyed the story and would compare it to a Anne Rice type novel, where we walk with immortals and experience new places and time periods through the. I believe that all the main characters are of African decent and this adds a new dimension to the story as to how someone could survive unscathed through those turbulent times, I only wish they would of explored that avenue more, it was brushed upon; but that could be whole story unto itself. For these reasons I give the story a 4 out of 5.

Brenda Scott Wlazlo surprised me in the narration department, she fleshed out two very distinct personality types with different accents and a lot of non English words intermittent in the story to great avail, I was very impressed with how well the narration was performed, the cast is a relatively small one so who knows how far she could stretch this talent; but for this book she was fantastic and for this reason I give narration a 5 out of 5.

I enjoyed this book, the story and narration alike; at the beginning I thought it was an erotica type novel; but they were scenes to add to the overall vibe of the story, being that I enjoyed I would listen to it again; but although I enjoy vampire books I do not necessarily relisten or reread (Salems lot excluded). I have never reread an Ann Rice novel and more than likely would not relisten to this book; but that is more than likely due to my particular taste in literature and may differ for you if you love vampire stories, for this reason I give listenability a 2 out of 5.