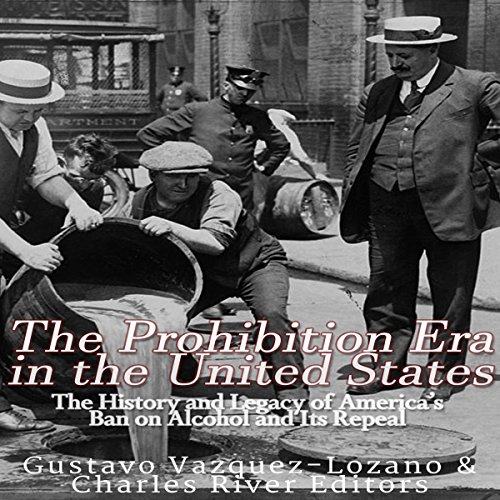 The Prohibition Era in the United States

The History and Legacy of America's Ban on Alcohol and Its Repeal
By: Charles River Editors, Gustavo Vazquez Lozano
Narrated by: Scott Clem
Length: 1 hr and 12 mins
Categories: History, Americas
4.5 out of 5 stars 4.7 (3 ratings)

The Prohibition Era in the United States

The Prohibition Era in the United States ran between 1920 and 1933, but its background and legacy are so massive and wide-ranging it may be affirmed that the subject is adhered to the country's history, from its first years until the modern era. In this 13-year period, the entire nation was forcibly converted to a society of non-drinkers. The movement formed slowly, exploding in 1920. Once it had passed, its effects continued to be felt through the rest of the 20th century. To this day, it can be said that Prohibition teaches an important lesson.

The 18th Amendment making Prohibition constitutional and the Volstead Act detailing its enforcement did not come out of the blue - it was neither an electoral occurrence, nor was it a quick and surprising attack by a one interest group taking another unprepared. It was actually the result of a long period of indoctrination, a century of struggles between two political, and above all, moral positions: those who supported Prohibition - the so-called "drys", and those who opposed it, partly because they thought it should not be a government prerogative to control individual freedoms, also known as "the wets". The first group believed Prohibition of liquor, intoxicants, and saloons was a necessary measure to eradicate the great evils that were a part of the nation's life: drunken and violent husbands, labor accidents due to alcoholism, shattered homes, battered wives, and the family's patrimony lost in a single day. The wets defended a legitimate industry that produced jobs and taxes. They spoke of economic interests that would be damaged and of respect for sacrosanct individual freedom.

What listeners say about The Prohibition Era in the United States