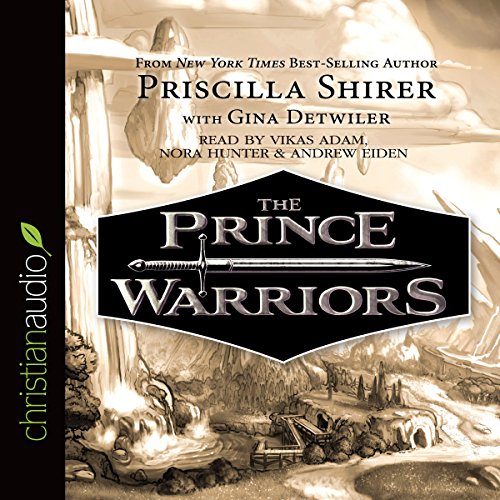 The battle is real.

As brothers, Xavier and Evan are used to battling each other. But now they're discovering that there is a much bigger battle going on all around them. And it's their turn to fight.

Based on Ephesians 6:10-18, The Prince Warriors is the first book in Priscilla Shirer's epic new children's series that brings to life the invisible struggle ensuing in the spiritual realm.

Xavier, Evan, and their friends have typical lives until they enter a mysterious land called Ahoratos. There they meet their guide, Ruwach, who offers wisdom and direction as the kids' initial adventure begins - an adventure filled with armor and danger and a very real enemy.

Written by New York Times best-selling author Priscilla Shirer, The Prince Warriors series was created for middle-grade listeners and will include the fiction trilogy as well as the 365 Prince Warriors Devotional and app.

What listeners say about The Prince Warriors

Suitable action/adventure for me and my 7YO

We really enjoyed the Prince Warriors while driving across the Southeastern US. We will listen to the next one on the way home. Was exciting but not so scary my kiddo couldn't handle the tension... and it provided some nice discussions around faith, obedience, and revisiting some of our Bible stories. Well done!

Christian storytelling in the vein of Lewis

This story is a true Christ-centered alternative to HPotter. Updated version of Narnia/Middle Earth styles

Our entire family loved this audiobook. We listened on a road trip. Ages 8, 10 & 2 40 somethings. Very creative and lovable characters. Can’t wait for the next. So thankful for Christian authors who can write redeeming stories that entertain the whole family. Well done !

Wow, if you are a parent and you have kiddos you need to get these books for your kids. My daughter received this books when they released. After I read The authors heart of what she was trying to portray. My little girl has the hard cover and I bought the audible to listen to and from my way home from work! Now my daughter has read the first too and continues to tell me to catch up! She read the second book so quickly I was amazed, she is 10 and LOVING THEM!!! Share share share these with nieces nephews and loved ones!

We love this book!!!

We love this book so much. We listen to it numerous times in our homeschool.

Enjoyed this book, and am looking forward to the second one. Shirer has done a great job of creating an adventure for Christian young people.

Solid start to a series

I was previewing this for my kids.

I LOVED the storyline, character development, and relatability of the characters. I think my kids will connect.

The narration is good, but the sound effects in the background completely take away from a well written book. Tense portions are made a little chaotic with music and sounds that drown out narration.

Hoping it changes in books 2-4.

Enjoyed the listen. was outstretched at times, but the story line was goog. I can see some biblical resembles. Will let my kids read it one day when they are older.

My 9yr old enjoyed this. Would like to see a movie of it. Great book