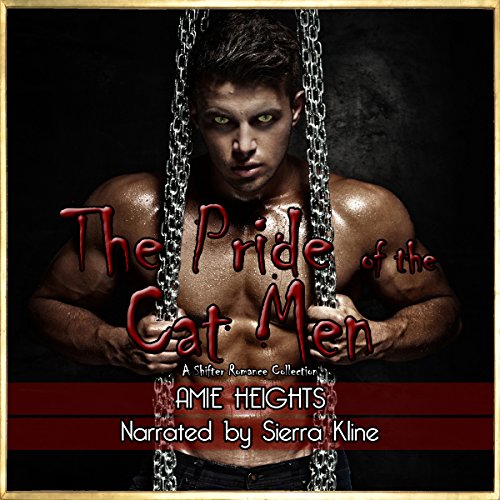 The Pride of the Cat Men

By: Amie Heights
Narrated by: Sierra Kline
Try for $0.00

This is the three-part Pride trilogy complete in one bundle.

Part One - Revenge of the Cat Men

In the dark corners of the city a pack of shifter men have lived by one rule: stay hidden. When one of the pride is captured and experimented on, they can only think of one punishment for the outsiders. Alison Biggs finds herself caught up in a battle for dominance as the entire pack pick her for their gang revenge. Her work as a receptionist for the shadowy complex had always been innocent, until the alpha leader of the pride stages a daring rescue of the kit Samuel. Taken to their den and held responsible for the injustice, Alison immediately finds herself at the mercy of the powerful beasts and their inhuman passion for revenge.

Alison is still at the mercy of the Pride, a group of shifter men who took her as retribution for the injustice caused by the company she worked for. She quickly finds herself torn between the Alpha male and his second, whose fight for dominance has her as the prize. Driven out of their protected, den the Pride is now being hunted by the powerful Sebastian Gold, a man determined to discover their secrets at any cost. Alison is brought along as they flee to find a new home, and perhaps find out that what they really want is with them already.

In the thrilling conclusion to The Pride trilogy, Alison volunteers to take part in a daring plan to free her new shifter brothers from the pursuit of the obsessed man hunting them. With the Alpha and his second of the Pride both desperate for her affection, Alison must make a choice now or tear the family apart. Mixing her blood with theirs, she infiltrates the office of Sebastian Gold, her former employer and the man responsible for the devastation of their hidden den. She soon finds that she may not be able to control the primal urges that now runs hot through her veins.

What listeners say about The Pride of the Cat Men