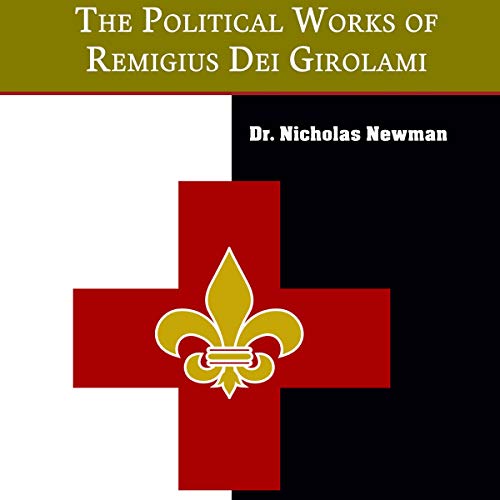 By: Nicholas Newman
Narrated by: Chiquito Joaquim Crasto
Try for $0.00

This is an abridged version of Dr. Nicholas Newman's translation and commentary on the political works of Remigius dei Girolami. Not included in the audio version is Newman's commentary, footnotes, and works cited.

Remigius dei Girolami, a Dominican friar and lector in the Santa Maria Novella church in Florence as well as a political philosopher and theologian, wrote in the context of the Guelf-Ghibbeline conflict in Florence in the early 14th century. Unfortunately, Remigius is rather poorly known, as he is eclipsed by his more famous teacher, Thomas Aquinas, and his Florentine contemporary, Dante Alighieri. Nevertheless, Remigius authored an impressive array of texts, ranging in topic from theology to science to music to politics.

What is offered in this book is a new translation of several of Remigius dei Girolami's political works; the De Bono Communi, De Bono Pacis, Sermones de Pace, and the De Iustitia. These texts, in their discussion of how to overcome this conflict, offer a unique perspective, since Remigius carefully avoids the core of the conflict, the last playing out of the Investiture controversy between Pope and Emperor, and instead focuses on the relationship between the individual and the state. These are not polemic texts, meant to bolster one side over the other, rather he paints a picture in which even the victory of one side over the other results in destruction for all, since conflict is of detriment to society as a whole. It is not imperial party or papal party that are the problem and must be defeated, as is seen often in other texts of the same time period, such as the Defensor Pacis by Marsilius of Padua or Dante's De Monarchia, whose hatred of the Black Guelfs was so great that he consigned many of their leaders in the Inferno. Instead, it is the individual who does not love the city who is culpable for the destruction of the state, conversely, it is through the love of this individual for the community that all benefit.

What listeners say about The Political Works of Remigius Dei Girolami