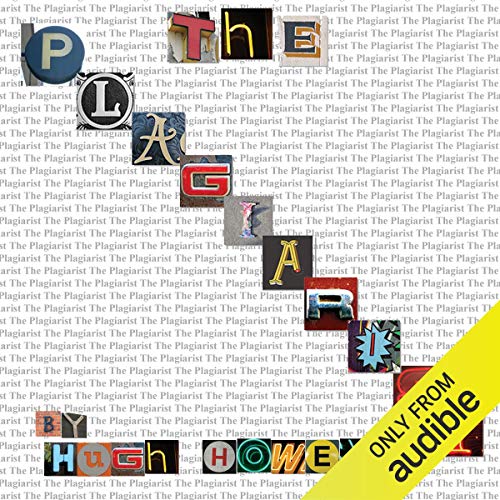 By: Hugh Howey
Narrated by: Alexander J. Masters
Try for $0.00

Adam Griffey is living two lives. By day, he teaches literature. At night, he steals it. Adam is a plagiarist, an expert reader with an eye for great works. He prowls simulated worlds perusing virtual texts, looking for the next big thing. And when he finds it, he memorizes it page by page, line by line, word for word. And then he brings it back to his world, the real world, and he sells it. But what happens when these virtual worlds begin to seem more real than his own? What happens when the people within them mean more to him than flesh and blood? What happens when a living thing falls in love with someone who does not actually exist?

What listeners say about The Plagiarist

An interesting sci-fi tale that takes advantage of the idea that universes are layered and at the mercy of the higher levels. Not an uncommon but not uninteresting conceit. At the risk of ruining the story, essentially our hero is a data miner who falls in love with one of these "lesser beings". Decent story.

The reader is the weak point. He is monotonal and lends no drama to what should otherwise be quite a suspenseful story. He seems to plod along as if he is trying to put the listener to sleep, not give a dramatic performance. As a result at several points I considered not finishing the story. Before buying this story I'd recommend listening to the reader and asking if you would enjoy listening to this tone for 1&½ hours.

Hugh Howey packs a lot into this little short story.

If you don't mind paying for an hour and a half story, GET IT, it is a 'fun listen' with an interesting premise.

Reminded me of a Phillip K. Dick story... always something 'just a little different'.

The narrator almost ruined the story for me. He had a nice voice, but his delivery was incredibly obnoxious.

I can't even get into the book. Within 5 minutes of the chapter I'm already bored by the reader.

Snow Crash for the literati

While the concept isn't wholly original, The Plagiarist is so well-executed and well-told that you don't really care. If you loved Snow Crash, and/or you like thinking about books and their provenance, you'll probably enjoy this little nugget of a novella.

The reader did a good job with voices but used an annoying technique in the narrative sections in which he dragged out trailing words and phrases making him sound pompous.

PKD could have written this story

The Plagiarist is a science fiction novella written by Hugh Howey, who recently became famous for his self-published WOOL series. The plagiarist of the title is Adam Griffey, a college professor who uses newly discovered technology at his university to visit virtual worlds where he seeks out brilliant authors, memorizes their works, and brings them back to our world. Everyone knows the works are plagiarized, but since the author doesn’t live in our world, it doesn’t count, and our protagonist gets the credit for discovering the talent and, most importantly, he gets the money for the sales. This sort of plagiarism isn’t just for literature, though. Adam has colleagues in other departments who do the same thing, and now all fields of knowledge — science, technology, art, etc. — are advancing rapidly because of the discoveries made in virtual worlds.

All is going well for Adam — his work has made him famous — until he falls in love with Bellatrix, a woman in the latest universe he’s been visiting. When he goes there, he spends all his time making a virtual life with her instead of doing his job. His relationship with his real online girlfriend is suffering and, of course, so is his teaching and research. Like a true plagiarist, he is “faking his real life so he can live his fake one.” Just when it seems that Adam can’t maintain his plagiarized life any longer, his university announces that Bellatrix’s world is about to be wiped from the servers because it’s taking up too much space. That means that the virtual woman he loves will no longer exist, so Adam goes on a mad scramble to try to save their relationship.

Okay, if I had just read my synopsis above, I wouldn’t even need to read the rest of this review — I’d already be pressing the “buy” button ‘cause that just sounds awesome. But for those who want to know more, I’m happy to report that I loved this story. If Philip K. Dick had lived twenty years longer, he would have written The Plagiarist.

Not only is the plot exciting, but for such a short story (58 pages in the 99¢ ebook, 1.5 hours for the $2 audiobook) there’s a lot to think about: online dating; how spending time in virtual worlds might affect our real lives and relationships; parallel universes; the meaning of art; the way that rapidly advancing technology has led to information overload, mass consumerism, and perhaps a decline (or at least an inability to recognize) genuine talent. And there’s more that I don’t want to tell you about so as not to ruin the plot.

The Plagiarist is a perfect introduction to Hugh Howey. I listened to the audiobook which is narrated by Alexander J. Masters. At first I was slightly put off by his stilted cadence, but as the story progressed, I found that it fit nicely.

This book addresses the future and the thought experiments of this future in such an interesting way. If you wonder what the future will look like with the adevent of virtual reality and a loss of self-awareness in the coming society, get this book.

How Would You Choose To Live?

I still haven't gotten around to listening to Wool and the other better known works of Hugh Howey, but I did enjoy The Hurricane, and The Plagiarist was the perfect length and perfect price for me.
What a neat surprise, and what a great ending.
I suppose what I like most is Howey's ability to craft a character who is unable to connect to others (other than in a sims environment), yet we are able to feel so much for him. Truly, what a likable protagonist. The way he comforts the love of his life will break your heart.
And the ending! No spoilers, but what a great twist, deftly handled.
This is a well-written book, perfectly edited, the only drawback being some heavy-handed narration that you kinda sorta get used to.
I've REALLY gotta get around to listening to Wool!

I hung in there

After reading previous reviews that criticized the narrator's monotone voice, I took the time to listen to the audio sample before purchasing this novella. I decided that the narrator's quirk of drawing out his pronunciation of the last word of a sentence was a tolerable affectation and I purchased the novella. I really am glad that I hung in there. I truly enjoyed the somewhat predictable twist within the story. I found the narrator's reading of dialogue to be excellent. For the reasonable price I paid, I am very happy with this short story.

Just wish it was longer!

I loved this, big fan of his other work. This has left me wanting more!

Would you try another book written by Hugh Howey or narrated by Alexander J. Masters?

No. Alexander J. Masters made this almost impossible to listen to. I got 10 minutes in and gave up. The story could have been good but I'll never know

By using a different narrator.

Don't bother. It might be a good story but the narrator ruins it. It's impossible to get into.