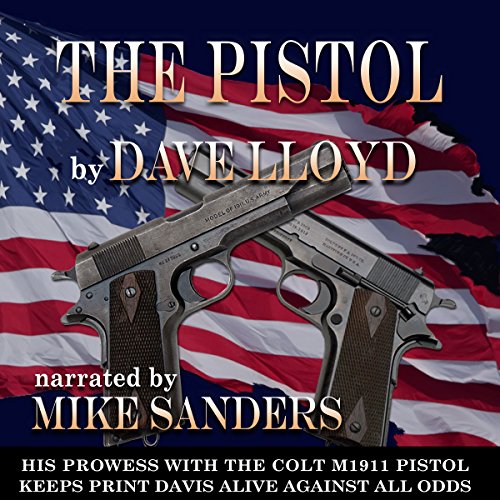 By: Dave Lloyd
Narrated by: Mike Sanders
Try for $0.00

Sgt. Print Davis is reluctant to retire his trusted revolver until his MP squad is tasked with participating in the 1911 tests being held by the Army in their quest for a new semi-automatic service pistol. He becomes a convert of the new weapon. Afterward, John Browning, its inventor, gives him the Colt pistol used in the trials.

Print carries the gun in combat in Mexico as his regiment chases Pancho Villa, then through World War I where his prowess with the number one saves his life and others time after time against the Germans. Later, he uses the pistol in South America in a rescue mounted to save some Americans from revolutionists. Then Davis is posted to China where he soon needs all his skills and determination to survive!

Although a work of fiction, this novel is dedicated to the Medal of Honor recipients whose citations were earned with the use of the pistol. Their factual stories of valor are woven between the chapters of Lloyd’s tale.

What listeners say about The Pistol

I enjoyed this book. I was surprised it was such an interesting read.

Sgt. Print Davis was an Army MP (military police). He was assigned to test the Army’s new semi-automatic pistol. The year is 1911. John Browning, who invented the pistol, gave Davis his own 1911 Colt semi-automatic pistol. The story follows Davis and his pistol on his military assignments from chasing Poncho Villa, World War I, Nicaragua and China. This was a story of a career soldier and the pistol.

The book is well written and fairly fast paced. There is lots of action and interesting detail about the history of the situation Davis was in. What I found most interesting is David Lloyd worked the factual stories of men who received the Medal of Honor using the 1911 Colt pistol into his story. I particularly enjoy fictional stories that weave in true historical information.

The book is eight hours. Mike Sanders does a good job narrating the book. This is my first experience with the author and narrator and I am impressed with both.