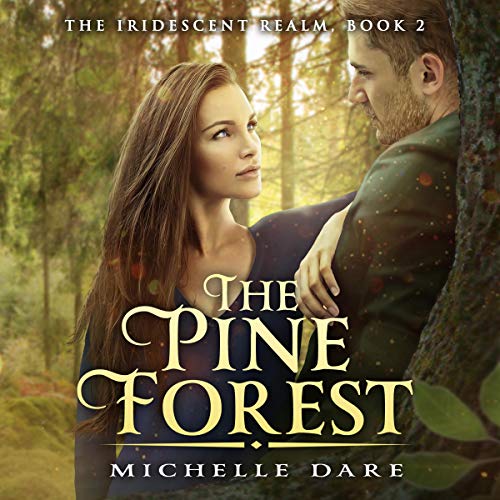 By: Michelle Dare
Narrated by: Sarah Puckett,Max Reids
Try for $0.00

Pine and Azure. The war between the two kingdoms lasted far too long. Peace was finally established, but the survivors would never forget who fought on the front lines. Oliver Sage had a reputation for being a ruthless knight. He’d seen enough death to last a lifetime and worked on putting the past behind him, although not all would let him forget.

Addison was the only daughter of King and Queen Azure. With three brothers, she knew she’d always be protected, but she also wanted to learn how to take care of herself. She was strong, had a good heart, and wanted to be treated as an equal. Magical abilities ran in her family, and she had one no one knew of.

Oliver had given his heart to one princess, until the night he dreamed of another. Addison was the last woman he should desire, especially given who she was. However, what if she wanted him as well? They’d hated each other their entire lives, but suddenly couldn’t resist the desire which built between them. There were also those who didn’t think they should be together. Forbidden romance could only stay hidden for so long in the dark depths of the Pine Forest.

What listeners say about The Pine Forest

Great narrators! Enjoyed both of their performances! Recommended listen!

Entertaining and fun! Sweet and steamy! Cool world building; interesting magical world! Love the whole being in each other’s dreams premise for the romance, and the bit of enemies to lovers scenario. Great chemistry between Addison and Oliver. Love book 1 and this one was great too! I’d recommend reading book 1 before this one, but it’s not completely necessary. Excited to read more from this author!

The world in this series is brilliantly created and the attention to detail is great but the story asnt that strong in my opinion. The characters are great and the romance is captivating.
The female narration is amazing but I felt the male sections were over played.
I still want to see where the series goes next.

Story and narration was amazing! Especially Max Reid's lines. I can't wait until this makes it onto television or the big screen. I'll be listening to a lot more narration with Max involved. He's so talented.

This is the second book in The Iridescent Realm, a Fantasy Romance. This is one of my favorite Fantasy Romance Series! I highly recommend you to listen to the Series in order. I love these Series with characters intertwined. Addison and Oliver's story is as great as the first book in the Series. They share a strong chemistry. The storyline is intriguing, and captivating. The cast of supporting characters is great! Sarah Puckett and Max Reids did a fantastic job with the narration. I love Sarah Puckett's voice, and even more when she read fantasy romance! Max Reids has a beautiful voice, very pleasant to listen to. I enjoyed it, and I highly recommend this Series! Michelle Dare never disappoints! Looking forward to listen to the next installment in the Series, Elliott's story! #AudiobookObsession

The Pine Forest (The Iridescent Realm, Book 2) is a fantasy romance that begins the story of Addison and Oliver which began in the epilogue of book one. This author has created a fascinating realm with intriguing characters. With magic swirling around through the pages, a rivalry between two kingdoms, characters banter, and plot twists seeping through the pages. I'm looking forward to listening to the final book in the series.

Narrator Max Reids performance felt a bit stale for me. Sarah Puckett is the Queen of narrating books. Her performance was perfect.

The Pine Forest is the second book in the Iridescent Realm Series. I liked this book a lot more than book one. It has good character development and some plot twists you won’t see coming.

Oliver and Addison met at Luke and Alison’s wedding in book one. Oliver is a Knight for King Pine and Princess Addison is Luke’s sister from the Azure Kingdom. One touch, was all it took to have them meeting in their dreams. The only problem-they are from different kingdoms, kingdoms that recently used to hate each other. I enjoyed the push and pull between these two. Even though they know they are fated, they take things slow. BTW-I want my own dragon the fly on 😂

Sarah and Max did a great narrating Addison and Oliver. I liked having the male point of view!

The Pine forest is the second book in the iridescent realm series. It can read as a stand alone but will be enjoyed so much more with the back story of The Azure Kingdom. Oliver and Addison have chemistry from the very first touch the road to happiness is not an easy one. Sarah Puckett gives an amazing 5 star performance but I felt that Max Reid was to harsh as Elliott. I loved Elliott in the first book, he was my favorite character and HATED him in this book all the way through the epilogue to the point I was not excited for the third book.

I like how Addison and Oliver overcome the rivalry and the magic between them. Michelle Dare has created a compelling world in The Iridescent Realm that keeps the reading guessing and reading more.

I received this audiobook for free from Audiobook Obsession. This is my honest and voluntary review.

Excellent continuation of the series

Such a good second book in the series, expanding on the world already introduced and getting to know the characters much better. it really pulled me in and I thoroughly enjoyed it.

She thought she had it all. She was set to marry somebody she's adored most of her life. She's comfortable in life until the man she's sworn as an enemy shows up out of nowhere and a spark clicks that neither of them can deny.

The Pine Forest by Michelle Dare is a fantasy romance that I listened to on audio narrated by Sarah Puckett and Max Reids.

This is the second book in The Iridescent Realm series. Each book follows a different couple but I would highly recommend reading them in order since the story continues where the last book left off.

I really enjoyed the second book more than the first one in the series. I liked that Oliver and Addison love story wasn’t insta-love like the first book. I can't wait for the third book in the series The Fuchsia Lakes to be released on audible to get Elliott and Karis love story.

Sarah and Max did a great job on the narration. They really brought the story to life.

Oliver’s skills as a Knight make him a powerful fighter and an invaluable resource to King Pine. He is still dealing to heal from the knowledge that the woman he vowed to protect and love has chosen another when he casually touches Addison changes everything and she is now appearing in his dreams.

Addison is a Princess in the Azure Kingdom whose family had been at war with those in Pine Forest for years until a recent treaty was signed. She is involved with another man but one innocent touch from Oliver and her heart knew he was special, but her head wasn’t so sure.

Addison and Oliver’s journey wasn’t without its obstacles as there are people in both their kingdoms that don’t want them together and they must decide if the reward of being together is worth the risk. I thought that the narrators were a great choice as they brought out the strength and determination of both these characters. 🎧 Audiobook Obsession

I was so excited to listen to this book, considering I love Michelle Dare stories and that Book 1 was fantastic. Well as expected it did not disappointed me at all, it was perfect!
Addison and Oliver were so perfect for each other, even though they were reluctant at the beginning considering they used to be enemies, once they accepted that fate had brought them together their relationship was great. Addison is so strong and it's great how she allows herself to be vulnerable around Oliver and the way she trusts him was everything.
I adore Elliott and his attitude towards Oliver was so childish at times that was really funny, I can't wait to read his story.

The narration was perfect. You can't go wrong with Sarah Puckett, her performance is perfect. It's my first time listening to Max Reids and I really liked his performance, the way he puts emotions in every word and brings the characters to live was so good.