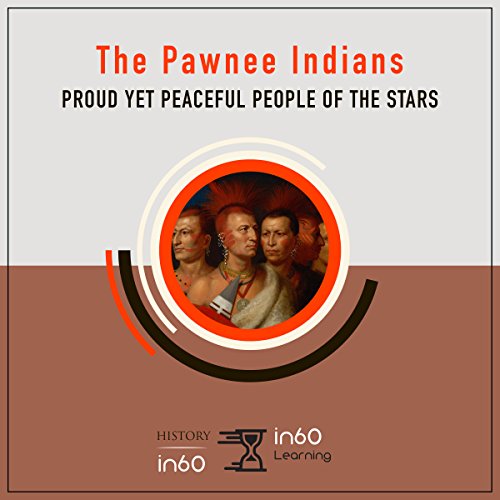 The Pawnee Indians: Proud Yet Peaceful People of the Stars

The Pawnee Indians: Proud Yet Peaceful People of the Stars

By: HistoryIn60
Narrated by: Andrew Colford

The Pawnee Indians were a fierce, proud, and determined people who called themselves the "men of men". Though there are many Native American tribes to learn about, the Pawnees were unique in many ways; they were a peace-loving, agricultural people with permanent settlements in what is now Nebraska. They dedicated themselves to their gods, the stars, and even arranged their villages according to important star clusters. They fought one notable bloody war with the Lakota, but in 1875, when it came time to make a treaty with the white settlers, the Pawnee packed their bags and left their tribal homeland for a reservation in Oklahoma. Though this displacement has diminished the preservation of their culture, delving into their history is a way to honor it.

While I might dispute the title's claim that the Pawnee were peaceful (their people did, in fact, perform human sacrifices), the rest of this lesson was a breeze to listen to. The Pawnee tribe has their history condensed into about an hour's worth of talking, so you might leave this text with questions and hopefully, a piqued curiosity

Things I did not know

This is the second book I’ve read/listened to by this author and I would listen to another. I enjoy this format and find the info they present is interesting. It flows well and I am satisfied they’ve covered the presented material well enough that I’m not left hanging, yet I am left with a desire to expand on the information and learn more.

This is the first book I’ve listened to by this narrator and I would listen to another. He did well reading the information. His pace was good and voice clear. The recording is tinny however and there were a few instances of repeated segments due to poor editing. One was even in the sample audio! Due to this I lowered my review by a star.

The Pawnee Indians: Proud Yet Peaceful People of the Stars. Great info about one of the lesser talked about tribal people, there has been much written about the warlike plains tribes. The book explains the Pawnee way of life, their history and culture.
Great for a lunchbreak listen.
I was given a free copy of this audiobook at my own request, and voluntarily leave this review.

Note: I received this audiobook for free for the purpose of review.

The quality of the information is good, though I would have preferred if they'd gone a bit further back in history, but since the intention of this series is to cover a topic in approximately an hour, it's understandable that it's not going to teach all there is to know about a subject. It does a good job of covering some early history, relations with other tribes, religious/spiritual beliefs, tribal structure, and key historical points though.

The biggest flaw with the book however, is that it sounds like it was recorded in a concrete room. There is a definite reverb/echo to the audio that can be a bit off putting. There are also a few audio glitches, as well as a few points where a line is repeated by the narrator. It didn't make it unbearable, but it did make it feel less professional. I think the creators would do themselves a lot of favors to invest a bit more money into a proper recording studio and to put a bit of time into editing the audio to smooth things out.

A quick overview of the Pawnee's. This gives you a glimpse into the strong tribe, their values, their culture, and talks of when they did have a war they were fierce yet defeated. The Pawnee language is almost extinct. This short book gives you a lot of details and it is a nice quick read.

Fascinating subject as well as a great narrator

First of all I want to say I'm so glad I was offered the chance to listen to this audiobook of The Pawnee Indians. I really enjoyed listening to it. It's only my second audiobook of the year so far, which is already twice more than the previous year. So that's really great on its own for me. Usually I get easily bored or my mind starts to drift when I listen to audiobooks but I'm glad to say this wasn't the case at all with this one. Maybe it was because it was only about an hour long or because the subject was really interesting. It was probably both.

Starting this book I didn't know anything about The Pawnee Indians although I've always been interested in Native American history. So because of that in every single chapter there were a lot of new things for me to learn. And some things I did learn were pretty surprising to me as well. That's why I love history so much.

I really liked the narrator, Andrew Colford, as well. He had a great voice and accent to listen to, which also never got boring. And as someone who's first language isn't English I could understand him perfectly, which is always a bonus for me with audiobooks.

The Pawnee Indians practiced human sacrifice.
The Pawnee people were deeply religious and didn't convert to Christianity until the late 1800's
Family lineage in the Pawnee tradition was matriarchal.
Women n Pawnee culture were underplayed but some were entrusted with vital roles.
They were warriors but valued peace in their own community.

Very informative and broad overview from 1600s, 1800s, Ends with 2012 tribe members involved in current Native American affairs in the federal government, and leading legal fights to regain tribal lands and rights. Describes: society, myths, housing,hunting, conflicts with the Lakoda, Pawnee belief system, marital practices, explanation of "people of the stars" and origin myths, languages- spoken and written, dying out and resurgence.
This listener had difficulty with pronunciation of Pleiades constellation and Leonid meteor showers.
In addition, production elements that were noticeable: quiet ending syllables sometimes swallowed up and the vocal sounded like it was in a tunnel. These were not too distracting, thus, content was clearly delivered.
Listen to this for a clear, specific overview of the Pawnee.

This work, along with the titles in the rest of the series serve as a wonderful primer for the subject matter given. The information contained in these concise min-courses is accurate and in just enough depth to give clear understanding of the topic. In that they are only about an hour long they cannot possibly go into all the nuances of the subject, but they serve to open the door for further investigation if the listener is so moved. At the very least you will leave with a better understanding of the subject then when you began. I have also found that the narrators selected for these series do a nice steady job of relaying the information without sounding like a lecture on the material. I would highly recommend these titles to anyone that has even a passing interest or simple curiosity about the topic.

A review copy of this audiobook was provided by the author, narrator, or publisher at no cost in return for this unbiased review. If you found this review helpful, please take a moment to click yes below.

This is book gives great information about the Pawnee Indians. It gives the important points about these Indians, helping to make learning about them fun and interesting. Once again, my only disappointment with the book itself was the lack of noting where the information came from. The only problem with the narration was that the quality wasn't there; it has a tinny sound to it.