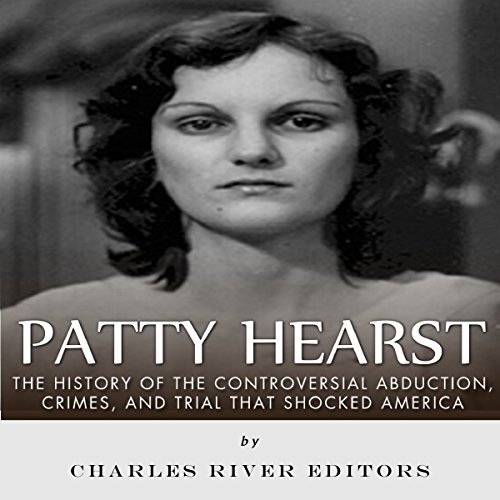 The History of the Controversial Abduction, Crimes, and Trial That Shocked America
By: Charles River Editors
Narrated by: Jim D. Johnston
Length: 1 hr and 14 mins
Categories: Nonfiction, True Crime
3 out of 5 stars 3.3 (4 ratings)

For most of the 20th century, the name Hearst was most closely associated with one of America's most famous (and infamous) newspaper magnates, William Garrison Hearst, whose life was the inspiration for Citizen Kane. But in the 1970s, his granddaughter Patricia made headlines thanks to a series of events that would wind up being one of the most bizarre chapters of the 20th century.

In 1974, Hearst was a 19 year old college student at Berkeley when she was kidnapped by members of the Symbionese Liberation Army (SLA), an obscure left-wing group with ties to the local area. In fact, the SLA abducted Hearst in part because she lived nearby, and it was hoped that her famous lineage would help them ransom her, either in exchange for imprisoned members of their group or for money that could be donated throughout the community. Those plans would never come to fruition, and as the SLA got more and more frustrated, they continued threatening their captive. Hearst recalled that the group's leader, Donald DeFreeze, "told me that the war council had decided or was thinking about killing me or me staying with them, and that I better start thinking about that as a possibility."

The Heart kidnapping helped propel the SLA into the headlines, but what followed was almost too much for anyone to believe. Whether through coercion or some other factors, Hearst became the SLA's most high profile member, and she was involved in the group's robbery of the Sunset District branch of the Hibernia Bank in San Francisco. Surveillance photos of Hearst carrying a gun shocked the nation, and Patty immediately became one of the country's most notorious fugitives.

When she was caught in 1975, Hearst called herself an "Urban Guerilla" and continued to be an advocate of the SLA, but within weeks, within weeks she had disavowed the group. As a result, the trial would hinge on issues like Stockholm Syndrome, coercion, rape, and even the belief that Hearst had been brainwashed. While the prosecution tried to depict her as being a willing bank robber, her defense argued, "There was talk about her dying, and she wanted to survive." Eventually, she was convicted and sentenced to seven years in jail by a judge, who asserted "rebellious young people who, for whatever reason, become revolutionaries and voluntarily commit criminal acts, will be punished." However, her sentence was commuted by President Carter a few years later, and President Clinton pardoned her altogether decades later.

To this day, the Hearst case remains controversial and is still the subject of debate. Through it all, Hearst has claimed she had virtually no free will: "I had been, you know, held in the closet for two months and, you know, abused in all manner of ways. I was very good at doing what I was told."

Spoiled brat. Repeat that phrase ten times, and you have the requisite number of words.