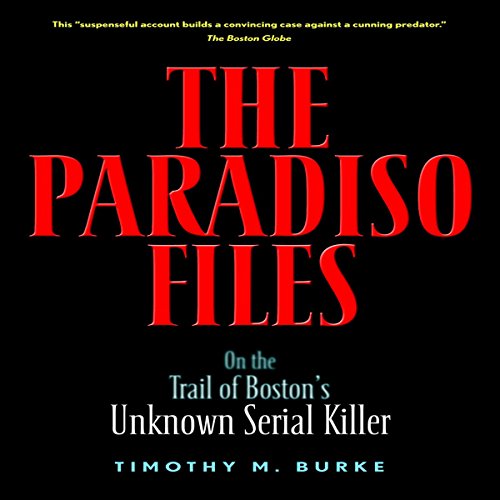 By: Timothy M. Burke
Narrated by: Wyntner Woody
Try for $0.00

In this bold and suspenseful true-crime story, former homicide prosecutor Timothy M. Burke makes his case against one Leonard Paradiso. Lenny 'The Quahog' was convicted of assaulting one young woman and paroled after three years, but Burke believes that he was guilty of much more - that Paradiso was a serial killer who operated in the Boston area, and maybe farther afield, for nearly 15 years, assaulting countless young women and responsible for the deaths of as many as seven. Burke takes the reader inside the minds of prosecutors, police investigators, and one very dangerous man who thought he had figured out how to rape and murder and get away with it.

The Paradiso Files generated headlines when first published in February 2008. Nine days later, Paradiso died at the age of 65 without commenting on any of Burke's accusations, including that he murdered Joan Webster, a Harvard graduate student who disappeared from Logan Airport in 1981. Boston-area prosecutors announced in September 2008 that Burke's revelations had led them to reopen the unsolved murder cases of three young women - Melodie Stankiewicz, Holly Davidson, and Kathy Williams. There were “too many similarities between the individual cases to ignore,” a prosecutor involved in the new investigation said. Burke's account leaves little doubt that Paradiso's deeds should go down in infamy, alongside those of the Boston Strangler.

"The criminal exploits of Boston's most notorious psychopath, fugitive gangster James "Whitey" Bulger, have been well chronicled. Now Timothy M. Burke exposes another sadistic figure who prowled Boston's streets for unsuspecting victims back when Whitey was still the man: Leonard "The Quahog" Paradiso. . . . In a suspenseful account offered by the former prosecutor who sent Paradiso to prison for the 1979 slaying of Marie Ianuzzi, Burke builds a convincing case that the Revere fish peddler was a cunning sexual predator who got away with many more slayings. . . Burke tells a compelling story, with chilling accounts of Paradiso's crimes gleaned from victims' accounts and evidence that never made it to court. . . The story transcends Boston with an insider's view of the criminal justice system. . . It's a good read. And Burke, who led the State Police investigation into Bulger during the 1980s, even manages to slip in a few observations about him" ( Boston Globe)
"Burke’s colorful and creepy debut takes a Grisham-esque ride through both the legal system and the mind of a killer... This deserves mention alongside Vincent Bugliosi’s Helter Skelter (1974) and Robert Graysmith’s Zodiac (1986) as a stellar exploration of the soul of a mass murderer." ( Kirkus Reviews)

What listeners say about The Paradiso Files

Detailed Explanation of How a Prosecutor Proceeds

Would you consider the audio edition of The Paradiso Files to be better than the print version?

No. I bought this book on Whispersync and read it in both formats. Frankly I found Mr. Woody's use of cartoon voices annoying. He's very good at them but this is not a funny book. Making the author of the book who was also the prosecutor in the case sound like Casper the Friendly Ghost was I thought way over the top. I have no problem with suggesting colloquial accents but there are many places where I couldn't understand what the narrator was saying at all. I had to go back to the Kindle version to determine what was going on.

I live locally to the areas mentioned and was completely caught up in the theory that Lenny Paradiso was a serial killer. I accepted it pretty quickly because of the narrative descriptions of the crimes. Only after I'd finished the book and started to research the case personally did I discover that this entire theory is VERY controversial in Boston. I guess there is not much doubt that Paradiso raped Connie Porter. There is a great deal of question however on the streets of Boston about his being the perpetrator in the Iannuzzi homicide and there is no proof or probability that he had anything to do with the disappearance of Joan Webster.

That Mr. Burke makes no mention of the fact that both George and Terry Webster worked in the intelligence community and that their daughter's murder may stem from a much more complex and sinister motive. Many people I've talked to in Revere Massachusetts think that Mr. Burke, knowingly or not, was engaged in a cover-up regarding what really happened to Joan Webster. Framing Paradiso for the Iannuzzi murder and then laying nearly every unsolved homicide of a woman in Boston at his door including and most significantly the Webster homicide is not justice if it isn't true. No one I talked to thinks Lenny Paradiso is a "good guy." He's a scam artist and rapist. If he's just being used to stop the investigation into the disappearance and murder of Joan Webster, I'm afraid it's not going to work over the long run. There are a lot of Bostonians completely dissatisfied with Mr. Burke's theory.

What does Wyntner Woody bring to the story that you wouldn’t experience if you just read the book?

As I said, Mr. Woody has an entire arsenal of character voices from President Richard Nixon (defense attorney Rappaport) to Marge Simpson (Candace Weyant). I found these voices in a very serious crime analysis distracting. This is a chilling book. Mr. Woody's narration undermines this fact considerably.

I couldn't put it down. When I wasn't listening to it I continued reading it on Kindle. I finished it in less than two days.

I could not get passed the first 45 minutes in which the narrator not only poorly attempts a Boston accent but I think he is trying to do some old gangster movie type acting and it is AWFUL!When he got to the point of trying to do a voice for a black pimp from the early 70s I just got embarrassed for him and quit.

Would you ever listen to anything by Timothy M. Burke again?

Maybe but must have a different reader.

The story seemed somewhat interesting but I'll never know because I can't listen to this guy any longer.

Thanks to Audible's return policy I don't feel as if I've wasted money on a crummy book. I'm a happy customer.

The Narrator needs a new career

Would you try another book from Timothy M. Burke and/or Wyntner Woody?

I would from Timothy Burke. The story was good and out together in a good order

Picked anyone else who has narrated something besides a text book before. His inflections to differant people was horrid!