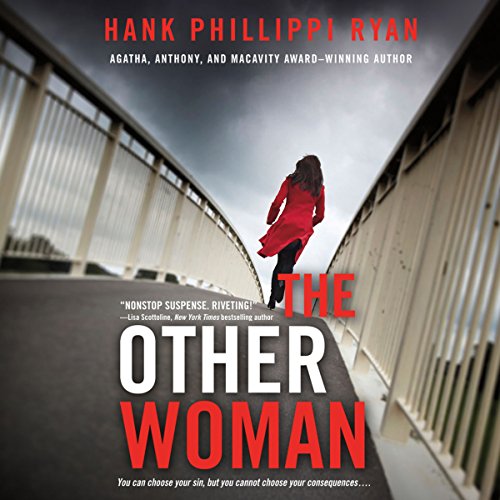 By: Hank Phillippi Ryan
Narrated by: Ilyana Kadushin
Try for $0.00

Dirty politics, dirty tricks, and a barrage of final twists, The Other Woman is the first in an explosive new series by Hank Phillippi Ryan. Seduction, betrayal, and murder - it’ll take a lot more than votes to win this election.

Jane Ryland was a rising star in television news...until she refused to reveal a source and lost everything. Now a disgraced newspaper reporter, Jane isn’t content to work on her assigned puff pieces, and finds herself tracking down a candidate’s secret mistress just days before a pivotal Senate election. Detective Jake Brogan is investigating a possible serial killer. Twice, bodies of unidentified women have been found by a bridge, and Jake is plagued by a media swarm beginning to buzz about a “bridge killer” hunting the young women of Boston. As the body count rises and election looms closer, it becomes clear to Jane and Jake that their cases are connected...and that they may be facing a ruthless killer who will stop at nothing to silence a scandal.

What listeners say about The Other Woman

Badly Flawed Production Ruined it For Me

The author is pretty famous here in Boston but I didn't know she had a book series (I don't watch the channel she is on). The plot seemed interesting but it was inspired by a number of local references, so us locals may have a slight positive bias.

The writing wasn't bad. She's no Lehane but the characters and the dialog were ok however with the bad production its a little hard to tell.

Would you recommend The Other Woman to your friends? Why or why not?

No. As I said in the subject: bad production. Might recommend the print version although not strongly.

Really really bad. The novel has a lot so short chapters cutting quickly between characters and scenes and this reader does no voices and almost no tonal changes so it is very hard to follow. Around the middle of the book she at least gets some emotion in her voice during action but that's about as far as it goes. To compound matters there are often no pauses between chapters so one chapter ends. The next chapter begins with the different character talking with no tonal shifts, no pauses..you're like wait a minute. This is a completely different character/scene.

Was The Other Woman worth the listening time?

It was ok. Nothing special. Very very annoying from a usability point of view.

Reader hampered enjoyment of this title

The book itself was interesting, however, the quick switching between characters didn't lend itself to an audio book, as it took a while to figure out we had changed scenes. That could have been corrected by a reader who would indicate, through voice tone or pauses, that a change had occurred.

Would you recommend The Other Woman to your friends? Why or why not?

No. The narrator was too irritating.

Who would you have cast as narrator instead of Ilyana Kadushin?

I'm not sure, but this narrator ruined the audio for me. First of all, she kept switching the pronunciation of the main character from "Jean" to "Jane." I didn't know until I checked a written description, that the character's name was "Jane." For a while, I thought there were two characters with similar names. She also mispronounced another character's name, though not as much. Most of the time it was "Moira" pronounced "Moy - Rah", which was a somewhat irritating name. Sometimes it was "Maura" or "Mora".

I have noticed similar comments from other reviewers. It is really important who narrates a book.

Tried to listen up to chapter 10, then had to abandon. It just did not grab my attention at all. Another wasted credit.

A better narrator might have helped the incredibly ridiculous story. More likable characters and a more believable plot might have also helped - although I really felt this book was irredeemable.

What could Hank Phillippi Ryan have done to make this a more enjoyable book for you?

Created characters that I cared about. None of these people seemed real or likable to me. The main character seems to bumble her way to a big story.

This book was set in Boston, yet not one character had a Boston accent. In fact, it was hard to tell one from the other because they all sounded essentially the same.

Disappointment would be the primary feeling. The author is apparently an award-winning television journalist and may be a great reporter but it would take a large sum of money to get me to read/listen to another one of her books.

I never felt this book had any focus or purpose. The lead character had integrity, I guess, because she wouldn't sleep with the cop she really liked because it would have violated her journalistic ethics and put her job at risk. But other than being ethical, she does not seem exceptional in any other way. Likewise, each of the other characters seem to have their own problems that kept me from caring about them. This may just a matter of taste, but I found this whole experience unfortunate. This is one of the few Audible books that I have not liked at least a little bit.

The amazing thing was that, at the end, best-selling author Lee Child interviewed the author and told her how great he thought the book was. The interview was more interesting than the book but it sounded like it was recorded on a bus based on the amount of extraneous background sounds.

Is it too much to expect a skillful writer?

I was so disappointed by the opening of this book I could go no further. Writers are told that the first scene of a novel should capture the reader, make them feel as though they are in the hands of a master who will take them on a wonderful journey.

The writing in the opening is amateurish, characterization and dialog poor. The author tries awkwardly to give us time, place, backstory. Do the following excerpts sound to YOU like what a realistic seasoned detective is thinking and saying at a murder scene? Or does it sound more like Jake, the new boy-detective, the master of cliches and dumb thoughts?

He recognized television. Radio. That kid from the paper. How did they get here that fast?

Too bad I can’t call Jane. She’d love this.

What does Jane always say? It bleeds, it leads. At least her stories aren’t like that.

The EMT’s scrambling out of the doors. No need for them to hurry, Jake thought. She’d been dead for at least three hours. Just like the other woman.

***
And, REALLY, can you "hear" this exchange among crime reporters at a murder scene?

The description is pretty well written. But if I'm going to spend hours of my time listening to a novel, I expect good writing. I gave two stars for the story because I had to rate it. Actually I have no idea.

Had a hard time finishing, very spotty book. Not a bad story overall, just poorly done. The writing is there; strong at times, but when its weak it's very weak.

The book hops around too much. I found it very hard to follow. The narrator was pretty good though.

I found the multiple plot lines hard to follow -- and I would have liked more character development. Characters seemed somewhat one dimensional and I think for a series it is especially important that the characters have some depth.

This was an interesting read, kind of ripped from the headlines! This author is an excellent new writer.

Just not that interesting

The story tries hard but it's just not that interesting. The plot twists don't really work and you don't get enough information about the characters to care what happens to them. It tries to have a hanging moment but they are so contrived and end up like a bad soap opera on the end of a paragraph.

Narrator is just ok -- occasionally she wanders off into a Boston accent but it seems completely random.