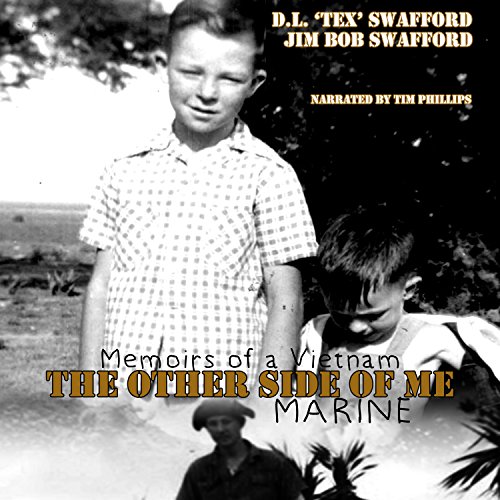 The Other Side of Me

By: D.L. Tex Swafford,Jim Bob Swafford
Narrated by: Timothy B Phillips
Free with a 30-day trial

The Other Side of Me is a true story about a Marine who served three tours of duty in Vietnam during the years of 1966-1970, D.L. "Tex" Swafford. Tex, as his comrades called him, was not the same man he once was upon returning home from 'Nam. No, that man died over there with thousands of other soldiers. He was a casualty of war, sent home with a broken mind and invisible wounds that were impossible to mend.

The Other Side of Me is his story of both strength and struggle during the war and after his return home. It's a look inside a man, a war veteran who suffered from extreme PTSD for many decades, for the remainder of his life. The hope is that his memoir will give insight and hope to current and future generations of combat veterans. Semper Fidelis.

What listeners say about The Other Side of Me

I think don't mean nuthin, not a thing.

The author is a very good writer, but for having served three tours in Vietnam I would have expected more information. I don't know what his MOS was, but I was an 0331, with Charlie Company 1/3, 1968-1969, survivor of the battle for Dai Do. Semper Fi and welcome home.