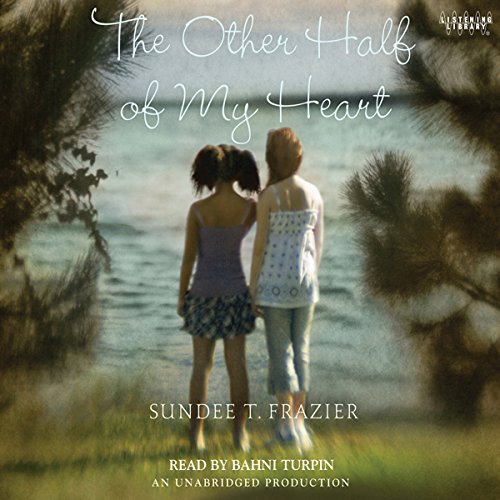 The Other Half of My Heart

By: Sundee T. Frazier
Narrated by: Bahni Turpin
Try for $0.00

The close relationship of a pair of biracial twins is tested when their grandmother enters them in a pageant for African American girls in this new story from Coretta Scott King/John Steptoe New Talent Award winner Sundee T. Frazier.

When Minerva and Keira King were born, they made headlines: Keira is black like Mama, but Minni is white like Daddy. Together the family might look like part of a chessboard row, but they are first and foremost the close-knit Kings. Then Grandmother Johnson calls, to invite the twins down South to compete for the title of Miss Black Pearl Preteen of America.

Minni dreads the spotlight, but Keira assures her that together they'll get through their stay with Grandmother Johnson. But when grandmother's bias against Keira reveals itself, Keira pulls away from her twin. Minni has always believed that no matter how different she and Keira are, they share a deep bond of the heart. Now she'll find out the truth.

From the Hardcover edition.

"Funny and deeply affecting, this novel by the Steptoe Award winner for Brendan Buckley's Universe and Everything in It (2007) revisits the still largely unexplored world of multiracial heritage...Frazier highlights the contradictions, absurdities, humor and pain that accompany life as a mixed-race tween. Never didactic, this is the richest portrait of multiracial identity and family since Virginia Hamilton's 1976 novel Arilla Sun Down. An outstanding achievement." ( Kirkus)
"A novel with a great deal of heart indeed...." ( Booklist)

What listeners say about The Other Half of My Heart

A relatable story for many ppl who look different from their siblings. The main character brought up good questions and spoke about the emotional side of not looking like your siblings. It's from a young person's personal perspective. However, the story doesn't end up where the main character feels divided.

Loved how the author viewed both sides to this dynamic friendship between sisters. The family relationships were an excellent way of bringing the story together.