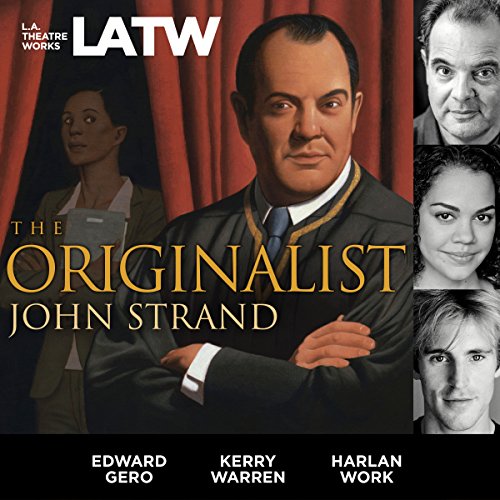 Supreme Court Justice Antonin Scalia believed that the United States Constitution is the most reliable source for a fair interpretation of the law as it is applied today. He was, in other words, an "originalist". But aren't the laws written over 200 years ago subject to interpretation - or even guesswork? Edward Gero stars as the late Justice Scalia in John Strand's insightful look at Scalia's life and legal philosophy.

Sound designed by Jeff Gardner, based on an original design by Eric Shimelonis.

Includes a postshow discussion about Antonin Scalia with Nina Totenberg, NPR's legal affairs correspondent; Tara Kole, an entertainment attorney who clerked for Justice Scalia; John Bash, an assistant to the solicitor general at the United States Department of Justice; and Tom Goldstein, a Washington lawyer who's argued 38 cases before the Supreme Court.

Directed by Molly Smith. Recorded before a live audience at the Arena Stage, Washington, DC, in June of 2016.

What listeners say about The Originalist

Imagine a play by Ann Coulter about Barack Obama. Pretty bad, right? This is that bad.

The vast majority of the lines by Scalia are contrary to his well-documented positions and the basic rules for Originalism. Just YouTube one of his lectures! The author creates a strawman that can easily be knocked down by misattributing positions and motivation. Kinda like how Coulter discusses Obama.

The young, liberal law clerk who challenges Scalia at every step is written as the most sympathetic character, in contrast to the Evil Scalia. It's stunningly bad.

But the last 30 minutes is an interview with former clerks, and it dispels and undoes everything the play attempts to do; namely, dishonestly portraying the basic rules for Originalism and the judges who follow it still (it used to be orthodoxy as the way to ensure an enduring Constitution and democracy).