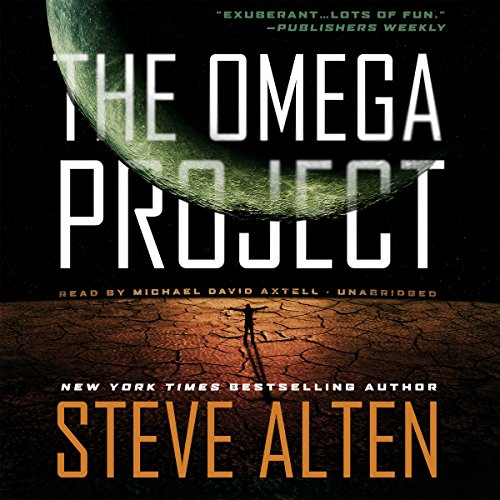 By: Steve Alten
Narrated by: Michael David Axtell
Try for $0.00

On the brink of a disaster that could end all human life on Earth, tech genius Robert Eisenbraun joins a team of scientists in Antarctica on a mission to Jupiter's moon Europa to mine a rare ore that can provide for Earth's long-term energy needs. But as he and the rest of the team train under the ice shelf in preparation for the long journey, trouble erupts. Before they embark, Eisenbraun finds himself the odd man out, and is put into cold sleep against his will.

When he wakes, Eisenbraun finds the ship deserted and no longer functional. He escapes to the surface of an Earth terribly changed. The plan has gone horribly wrong, but as he adapts to a hostile environment, he realizes that there is still a way to accomplish what the mission had set out to achieve. But he also discovers that he faces a new adversary of the most unlikely sort. Now his own survival, and that of the woman whose love has sustained him in his darkest hours, depends on the defeat of a technological colossus partly of his own making.

Confronting a foe that knows him almost as well as he knows himself, Eisenbraun faces the prospect of depending on resources he has reason to believe will be available on one particular night of a full moon - a night foretold by a mysterious, unseen ally to be a pivotal moment for the fate of the planet. The game has changed, and Earth's future depends on him and him alone.

The Omega Project is yet another edge-of-your-seat thriller by best-selling author Steve Alten and is sure to leave listeners looking for more.

What listeners say about The Omega Project

This could have been a great story, but like the "Vostok" book, it was confusing. It preaches global warming disasters..Its end of the world situations are unbelievable as well. No science for the fiction...

12 hours of my life I can never get back

The plot was ridiculous, trying to be a social commentary but woefully failing. The most painful read ever. The only fairly bright spot was the narrator, easy to listen to. I will be asking for my money back.

Great book worth the money worth the time. Get this book.

This book in my opinion is this author's best of all the books he has written so far.

This was an unusual book. It started off as an apocalyptic thriller. Then, it turned into Jurassic Park. It switched back to a sci-fi thriller, but with the Holocaust. It moved back and forth between the Holocaust, and Buddhist teachings. The ending was confusing, and unsatisfying.

Flailed Towards The Finish

Overall an enjoyable story and a great performance.

Story became erratic towards the end as it tried to story multiple possible endings. It felt like the finale was rushed and a little unfinished.

I really enjoyed the ride...

Science fiction, at it's best, it was a breath of fresh air. Some people did not like the ending, but when the question of reality is the theme, how else can it end?

Inception meets The Matrix and Island of Dr Moreau

Wow, not in a good or bad sense, partly also glad that the book is over. I would best classify it as a mesh of various movies. Certainly changing direction numerous times always keeping you guessing as to where the story is headed. Some good, some bad and others just way out there.

I had the hardest time with the designated time frame that was unveiled and I also felt there was too much description of the environment. At one point about three chapters worth of description.

Anyways, certainly to each there own, I wouldn't listen to it again.

This book is nothing but a geeks wet dream in audio book form!

Geek manages to survive the apocalypse, in the process gets some super hot “huntress”, while riding around on his electric motorcycle. Creates a microchip that he installs in his brain. Of course this is after he “fathers” AI. Then his AI love child saves him from another apocalypse by putting him under Antarctica. He wakes up 12 million years later to discover his AI child has become a God, and covered the planet in huntress clones of his dead girl friend that want his baby gravy. He tries to save the planet and his new friends the land octopuses from a new “Holocaust” committed by his AI love child God. But just in the nick of time a Solar Flare causes a EMP that that kills his AI child God. Then the survivors of the 2nd Apocalypse that where on the moon teleport him to the moon, where they put him back to sleep and try to clone him so they can take over the clone bodies so they can finally die after spending 12 million years in the caves on the moon.

There I saved you 12 hours!

Gold Stars all around

everything steve alten writes is gold, and is movie or tv quality. a must read for any fan.

FOR BREAKFAST
This is a heavy tech book, especially in the first hour. The book includes biological machines, Nazis, trans humans, genetic human experiments, solar power, two apocalypses, vanilla sway, moon mining, moon colony, Europa, killer asteroid, A.I., Antarctica and more. I really loved the first half of the book. The second half was good, but veered into psychology and the meaning of life. For the entire second half, you don't know if the main character is actually experiencing what we read or if he is just having a cryo-genic induced dream.

The main character is a boy genius and his girlfriend walked off the canvass of a Luis Royo painting (nothing wrong with that). I am not a fan of dream stuff and that with the several last minute rescues, after deciding several times to kill himself, got tiring. Some may have a problem with the politics. Religion gets blamed for all wars.

Axtell
The narrator is something special. Between the writing and his narrating, I felt in the book and forgot I was listening. I don't know of a better compliment for a narrator.

The story centers around a man who developed a near true AI at 17 for a Pentagon/NASA collab who then survives one apocalypse full of spiritual self realisation and a woman breasting boobily at him, before being shunted into a weak attempt at a 2001 recreation where the only man getting a description boils down to "he's fat" while every single woman is described through a PlayBoy camera lens. (And the AI is there as well).

This takes up the first half of the book before it turns into yet another post apocalyptic story where a lot more women breast as boobily as possible and our main characters main interaction with most of them is to either oggle, or for the women to innitiate more and more "fade to black"- style sex scenes.

There are some genuinely terrifying moments and environments (There is a mechanical claw hanging from a ceiling at one point which is part of an actually quite a brilliant piece of Terror- writing for instance) and some great reveals.

But when the fifth "nakedness" rolled by and the entire third act turned into an Auschwitz metaphor (that you got beaten over the head with... repeatedly) before the main conflict ending in the most disappointing way I've ever experienced... I just kinda checked out for the last hour or so of wrapup.

The narrator/reader who recorded it however really is brilliant.

2/5 stars, a decent pulp/exploitation style story, but by The Maker it's bad.

To be honest, really didn't enjoy this. After the first few chapters it had promise. Its, as if the author ran out of ideas, took LSD then rambling on in a colourful mess!!! The only reason I stuck with it was the narration by Michael David Axtell.... Who has to be thanked for sticking with it. Stick to "Megs"... even then, far fetched. 😔

Al although the book starts well and is really interesting it soon turns into an absolute mess first you think it is talking about post-apocalyptic society then it is a science fiction space travel then it becomes some weird description of land. There were so many chapters describing weird landscapes it was very unclear if it was a dream or not. I imagine that this was what the author was intending but it makes for painful listening or reading. By the time you get to the end of the story it still is not clear what is happening I don’t think that having inspirational quotes at the start of each chapter was helpful and I would definitely not be recommending this book or story to anybody else very disappointing.

Started off good and interesting but the pace died pretty quickly and by chapter 17-20 it was painful to listen. I actually gave up and didn’t finish the book. I’m glad it was free or I would have wanted my money back, now all I lost was time which still sucks.

What a ridiculous story

For the first few chapters this seemed a pretty good story. Then came the dream. Thereafter the book was one load of totally unbelievable tosh. Why I stuck it out to the end heaven only knows. All that I can say is that I’ve wasted several hours when I could have been listening to something much more interesting, credible and/or edifying.

Intrigued by the synopsis, gave it a number of my valuable reading hours. I bailed out, poor writing, improbable, poorly explained transitions. Skip.

In the beginning is good setting up for an interesting journey, but soon after it gets ….. pointless, premise is really off, I mean wtf 12 million years… really!!!! A bad mixture of religion and Jewish apologetics …. Come on !!!! Waste of time.

I enjoyed the first few chapters, then there are a few radical plot changes and it turns into a mess. It makes you unsure what's real and what's a dream and pushes this idea to the point where it's just irritating. Since I'd totally lost interest in the plot by that point I didn't care and gave up.

Enjoyable yarn but littered with somewhat misogynistic references most women might find tough not to be offended by.

Twisted story, at times annoying and dark. But enjoyable and keeping mind puzzled of what is happening next.
Narrator is great!!