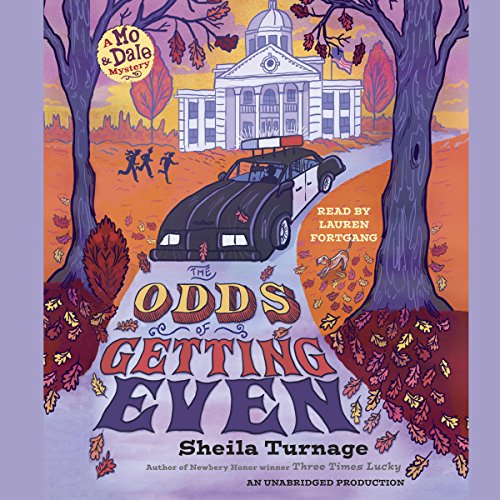 The Odds of Getting Even

By: Sheila Turnage
Narrated by: Lauren Fortgang
Try for $0.00

The trial of the century has come to Tupelo Landing, North Carolina. Mo and Dale, aka the Desperado Detectives, head to court as star witnesses against Dale's daddy - confessed kidnapper Macon Johnson. Dale's nerves are jangled, but Mo, who doesn't mind getting even with Mr. Macon for hurting her loved ones, looks forward to a slam dunk conviction - if everything goes as expected.

Of course nothing goes as expected. Macon Johnson sees to that. In no time flat, Macon's on the run, Tupelo Landing's in lockdown, and Dale's brother's life hangs in the balance. With Harm Crenshaw, newly appointed intern, Desperado Detectives are on the case. But it means they have to take on a tough client - one they'd never want in a million years.

For everyone who's already fallen for Mo and Dale, and for anyone who's new to Tupelo Landing, The Odds of Getting Even is a heartwarming story that perfectly blends mystery and action with more serious themes about family and fathers, all without ever losing its sense of humor.

“With her mix of homespun humor, well-plotted mystery, and delicious characterization ... Turnage's tale is full of heart.” (Kirkus, starred review)

"Another rewarding adventure ... narrated by Mo in her distinctive, imaginative voice. The writing lulls you with laughter, then occasionally blindsides you with unexpected tenderness.” (Booklist, starred review)

"Well crafted, with fast pacing; readers will gallop through the nonstop action to a satisfying conclusion. A must-read for fans of the first two volumes, and a rewarding adventure all on its own." (School Library Journal)

What listeners say about The Odds of Getting Even

Another awesome story a whole family can enjoy!

Our family has loved everyone of Shelia Turnage's books! We couldn't wait for this book to come out. Luckily, it coincided with a road trip.

These stories were so entertaining , I could listen to them again. I loved all the characters, especially Moe, Dale, and Harm. each successive story had the kids maturing, especially Dale. I liked that. Thanks MS. Turnage.

It was a great book and I can't wait to listen to more !!!! Love love

The story was as great as usual, I can't wait for the next book. This book gave me a new perspective on life that's actually really applicable. As for the performance, the dialect was pretty good but I feel like Dale's voice could've been a little younger sounding for a small 11 year old boy. It was hard to distinguish between Dale and Harm's voice a lot of the time. Nonetheless, the story is amazing and I recommend listening to it.