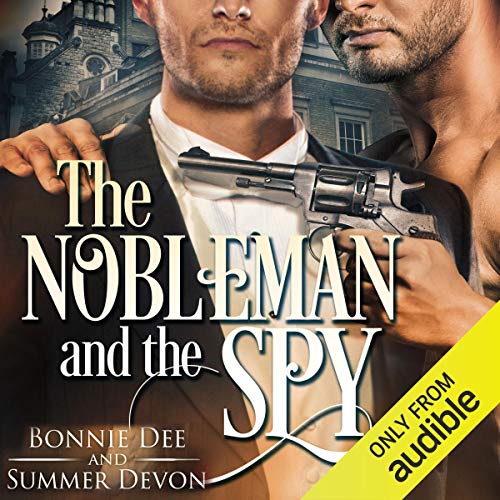 The Nobleman and the Spy

By: Bonnie Dee,Summer Devon
Narrated by: Todd Scott
Try for $0.00

They once faced each other on a battlefield. Now soldier-turned-spy Jonathan Reese must keep watch over the man he's never forgotten. A close encounter reveals Karl von Binder, the count's son, also recalls the day he spared Jonathan's life. Sparks fly between the former enemies and Jonathan begins to lose perspective on his mission. He knows he must maintain distance because the heat he encounters in Karl's touch stirs him far too deeply for his own good. He can't keep away - especially when he suspects someone is trying to kill the nobleman. The spy becomes a protector as Jonathan guards the man he's begun to care for. Together the men try to puzzle out who would benefit from Karl's death - and how much they're willing to trust each other when a torrid sexual fling threatens to become an affair of the heart.

What listeners say about The Nobleman and the Spy

I thought that the story was decent and that it had some really cool characters. I would've liked to see some female characters. Literally, zero in-depth female characters are in this book. They mention Karl's mother a little bit and there's the women at the party, but I would've liked to see some strong female characters. This book seemed to want to put a gay couple in the middle of a time when there was a strong fear, distain, and disgust toward all people who showed interest in that community. It would've been cool if there was this kick-a** female character that maybe was a spy with Reese? I don't know. ---ALSO, yes, tell the love story, I'm totally fine with that, but if there was more political/nobleman intrigue, I think the book would've been better, more depth than just erotic novels, and longer. It's like these authors are pumping out short gay erotic novels just to get to a certain number. I'm not trying to take away from the good qualities of this book, but I think it needed more on the story and intrigue side versus the love story side. ---This bugged me so much, but the authors decided to use a variation of these words so many times in this book that I started to roll my eyes. I can't actually write what one of the words is, because I want this review to not have any swears or anything that could get it taken down. In some way, these words were used together: his (word for male genitalia that starts with the third letter of the alphabet) twitched/ his c*** twitched/ my c*** twitched/ everyone's c*** twitched. Okay, that last one was trying to be funny. But, I'm serious, it was used way too much. And, it really isn't sexy to think of it moving with that word. I get what they're trying to say, but it just is not a sexy word to use when thinking of a man's genitalia and what it does and can do. (By the way, I know what you might be thinking. The C word for men was used to describe that anatomy as far back as the 17th century or so. I did look it up. I also had to look up another couple of things that would be right at home if there was a contemporary setting in a novel, but seems out of place in this one).

Would you recommend The Nobleman and the Spy to your friends? Why or why not?

Have you listened to any of Todd Scott’s other performances before? How does this one compare?

This is my first. I have no idea what he looks like, but I kind of fell in love with is voice (when he was reading from Reese's POV. It was always in third person, but the book did like to zoom in on Karl and Reese at separate moments. So it's more of a third person limited, but with two characters instead of just one). So, Mr. Scott as Reese was sexy and really charming. Karl too obviously.

Did The Nobleman and the Spy inspire you to do anything?

I was going to wait until the additional comments section, but I guess this fits here. One: yes, it did inspire me to start writing more frequently. I want there to be gay novels written by a gay man out there (Not that I mind these ones. I liked this one and I LOVED 'Zero at the Bone' by Jane Seville. I just would like to be one of the new gay male authors that comes out and can help these books get out there more.) --What I said before though, I had trouble getting through this book. I wanted this review to be entirely about the books and not my personal feelings/hand-ups, but this book made me sad every time I went back to it. I knew that I wanted to finish it, because I really wanted to know what was going to happen with the two men; however, I could only take it in short doses. Again, that is my personal hangup, but it did prevent me from devouring the book like I normally would have.

This has to be said. I know that there were homosexuals in early 20th century and before, obviously. My problem is that they seem to almost be a couple in this book, which never could've happened. I mean, maybe it could have. I'm not an historian or anything, but it just seems like they were asking to get caught and then get in serious trouble. The authors did mention the fears of them doing things together and being together, but that's it. There was no actual danger. Maybe we can put this book under fantasy, or, like I said in the title of this review WISHFUL THINKING. I'm also glad the book ended where it did, because I think there's a very dark future for them.

One of the best of this category even if the cover is a hundred years out of step with the time of the story.

I don’t care for sex scenes, but the story is good. Most of the characters are likable.
There is a small hint of the damage of war on a person, more to the point comments, and the difference of class.
I really enjoyed the except I’m not a fan of sex scenes.

I enjoyed this book. I figured out who the culprit was before it was reveled.

A lovely story, well written characters and great narrator. Can’t see anything that needs to be changed.

The overall is rather trite, a real disappointment from these authors. Repetitions in a couple of scenes as though there was a copy-paste moment there, a very unconvincing cliché damsel-in-distress reaction from a seasoned warrior in a professional situation, and a predictable outcome... Finished mostly for the pleasant audio performane. Itbwas a tiny bit monotone at times, but probubly due to the text itself. And I loved Cohen's no-nonsense manner, and a number of other secondary characters' voice interpretations very much. So many thanks to Mr. Todd Scott, mostly.

Great narration and story line. Although story could have been longer it was an exciting read!

I Love the man-sexy suspense of this period story with a somewhat surprise ending.

Where has Todd Scott been all my life!

While this story was entertaining, it was kind of lacking in comparison to other books by these authors. But the narration by Todd Scott more than made up for it! I think there were times I might have tuned out the words he was reading and just listened to his voice. He's a new to me narrator and his performance definitely made listening to this book more than worthwhile.
I checked out his library of work and was happy to see he's narrating another book by Bonnie Dee, which I've already downloaded.

I'm completely captivated by this story. The two main characters are very drawn to each other and increase their affection daily.