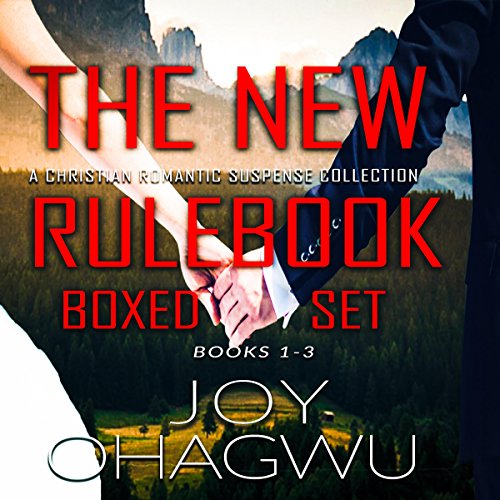 The New Rulebook framed Ruby Masters for murder after a routine delivery turned deadly, leading to a manhunt. Her biggest obstacle? She had no idea about her pursuer's identity. Her best friend from childhood, police officer Robert Towers, swung to her rescue, only for things to get complicated when he announced his conversion to Christ while their hearts got entangled. Snowy Peaks, a besieged town with its mayor held hostage, asked ill-timed for their help. But Ruby and Robert needed to unravel the tangled web over their hearts first. With their relationship knitting closer, so did the mysterious enemy after them.

What listeners say about The New Rulebook Series, Books 1-3

I enjoyed this series. It is a good listen. twists around every corner. I look forward to the next book.

Never a dull moment. You are riveted to the story. I enjoyed every word! & each story

The first part book 1 chapter 1 was a bit slow , however it picks up and what a wild ride!! The twists and turns kept me on the edge of my seat!!!
The narrator was excellent It’s a great listen.

This write is talented, but...

The love affair was tastefully handled and the story was good enough to hold my attention but, I'm sorry, I couldn't handle the narration.

What other book might you compare The New Rulebook Series, Books 1-3 to and why?

The reading was like an adult reading to a child. Little to no expression. Monotone in places. Little change of voices in characters.

Was The New Rulebook Series, Books 1-3 worth the listening time?

I would really like to work with this author. The story line was decent although the plot was weak, but I see talent in this writer. If she can break a few bad habits, she has a promising career. Deborah Owen, Creative Writing Institute