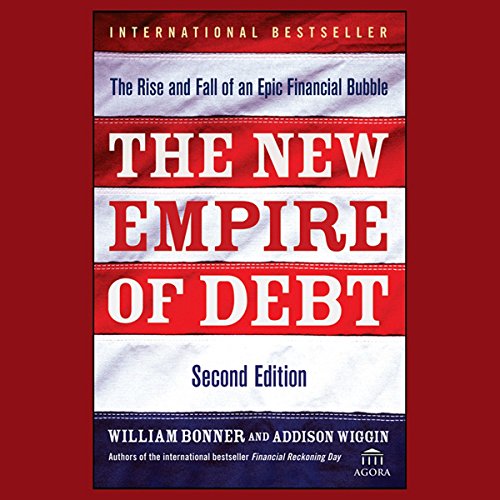 The New Empire of Debt

By: William Bonner,Addison Wiggin
Narrated by: Sean Pratt
Try for $0.00

In the last half of 2008, the Empire of Debt received the margin call from Hell. Now, all of its citizens are asked to pay up as the U.S. economy stumbles down a dangerous path of financial turmoil. What exactly went wrong?

When things are good, people tend to believe the most outrageous things - that the financial sector could get rich by lending money to people who couldn't pay it back, and that a whole economy could flourish by luring consumers to spend more than they could afford. These hallucinations created an immense worldwide bubble of debt and dollars. And now - with the U.S. government inflating the biggest bubble in public debt the world has ever seen - a financial whirlpool has formed and threatens to drag the entire country down the drain.

In The New Empire of Debt, the internationally acclaimed author team of William Bonner and Addison Wiggin return to reveal how the epic financial bubble that is plaguing the United States will soon bring an end to this once great empire. They offer a frightening look at the United States' precarious position and discuss how government control of the economy and financial system - combined with unfettered deficit spending and gluttonous consumption - has ravaged the business environment, devastated consumer confidence, and pushed the global economy to the brink. They warn of the dangers that lie ahead and offer practical advice to protect your financial well-being as the American empire collapses upon itself.

You'll discover that you don't have to tie your own fate to the inevitable destruction of America's system of imperial finance. Instead you can take some simple steps to weather the crisis. Bonner and Wiggin have been studying the financial landscape for more than 20 years. Now, they not only show you how we got into this mess, but how to get yourself out of it.

What listeners say about The New Empire of Debt

Would you try another book from William Bonner and Addison Wiggin and/or Sean Pratt?

Absolutely! Their analysis is spot on and well researched. They've written material that accurately preceded the economic events leading up to 2007-2008. Hopefully they are wrong about the future of the American economy!

Could you see The New Empire of Debt being made into a movie or a TV series? Who should the stars be?

Great listen, with a few rants

I enjoyed the book, but some of the rants could have been shorter, if not excluded. At times they seem to diminish credibility.

read at your own peril, you may shatter all of your previous preconceptions, but you will learn a few things.

Over the top, but wise enough to pull it off. Reminder that things end, always. And the bust you knew was coming still is. Even if we can't know when.

This book received average 4 star reviews so I was reluctant to buy it but I read Bill Bonner's daily column "Diary of a Rogue Economist." and enjoy it thoroughly. The book was even better and did not disappoint in the least. I learned a great deal of pertinent history about past empires and how they mirrored our own situation. Bonner's wit and analysis were right on target throughout the entire book. This is a book I will probably re-read to pick up details I miss or will forget. This is a five star book.

The book summarises the US Empire’s rise and potential fall against a historical backdrop of other failed empires. Throughout history the pattern seems to be the same for large empires. Lots of economics, history, some politics and well thought-out observations. The authors are quite humorous at times and I really enjoyed this audio book. It is long but the presenter is also very good. If you have read a few books on the GFC you will appreciate this books very thorough presentation on how the US went from such a strong credit economy to the debt economy it is today.

Interesting book overall. I would say it almost gives away the agenda during last chapter.

waste of time if you want to learn something

A few hours into this audiobook I gave up. The unbearably slow pace of Mr. Pratt's reading was driving me crazy and I could not stand the boredom anymore. Maybe speeding up the player, if I had that option, would have made the listening bearable, but then I had a much bigger problem with this book - I was not learning anything new here. The authors drown a precious few flimsy arguments about the US being an empire (so what?) and Americans spending too much (really?) with a whole lotta a bland sauce of yaddy-yadda peppered with what they obviously consider to be "witty" remarks, but which I only found to be annoingly snarky attempts at humor. Then I realized why the book bores me so much - it's a personal doom-and-gloom cermon of the authors' convictions, not a presentation of hard facts about the state of American economy. Why is American economy where it is now? Don't look for a deep analysis here. Although I agree with some of the things the authors claim (yes, Americans are not saving enough), they say very little about why Americans started to behave like this and why the economy is in decline. The true answers would be very uncomfortable to admit for free-marketeers like Bonner and Wiggin... If you want to hear more common sense than dogma and find out what's really wrong with American (and global economy) read this book instead: 23 Things They Don't Tell You about Capitalism by Ha-Joon Chang. You will get much clearer answers about why America is in debt.