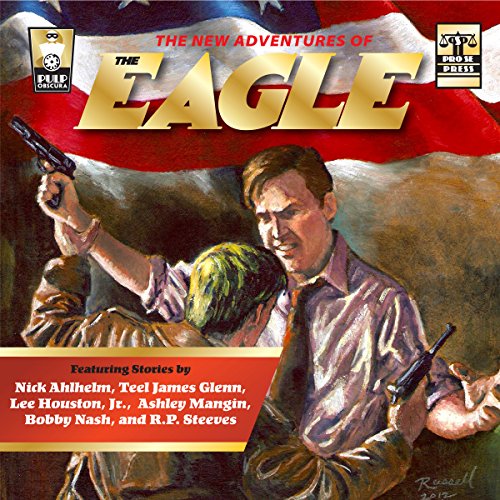 The New Adventures of The Eagle

From Japan to Berlin, from Paris to Moscow, from London to Washington, DC, and all points between and beyond, his reputation for facing the most dangerous opponents and taking on the most difficult missions is well known. He is the nation's ace troubleshooter, the country's amazing master spy. Jeff Shannon is the Eagle - America's ultimate secret agent!

The Eagle's mission: to wage a one-man war against America's enemies and those who threaten liberty across the globe. From out of the past comes new tales of one of pulp's forgotten heroes! Pro Se Productions, in conjunction with Altus Press, presents a new volume in its Pulp Obscura line, bringing adventures and heroes lost in yesterday blazing to life in new pulp tales today! Thrill to six sensational tales of high-powered adventure, heart-stopping thrills, and death-defying action from Nick Ahlhelm, Teel James Glenn, Lee Houston Jr., Ashley Mangin, Bobby Nash, and R. P. Steeves.

What listeners say about The New Adventures of The Eagle