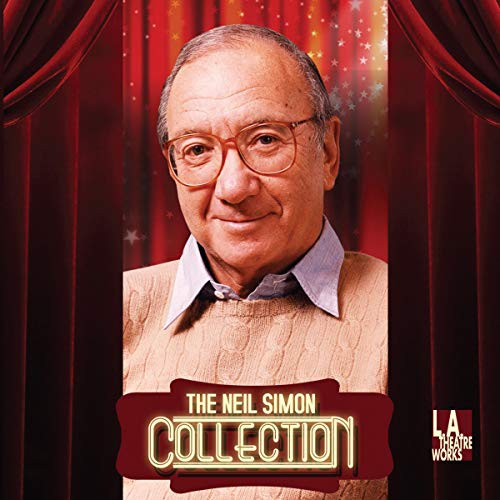 Ten essential plays by Neil Simon, one of the world’s most celebrated, translated, and widely performed playwrights.

Barefoot in the Park: Newlyweds move into a new apartment with no furniture, the wrong paint, a leaking skylight, and wacky neighbors! A classic comedy! Performed by Laura Linney, Eric Stoltz, et al.

Broadway Bound: In the final installment of the trilogy, Eugene and his brother, Stanley, pair up to break into the world of comedy writing. Performed by Dan Castellaneta, et al.

Lost in Yonkers: Set in Yonkers, New York, in 1942, two boys, aged 13 and 16, must spend one year with their austere and demanding grandmother. Performed by Dan Castellaneta, et al.

What listeners say about The Neil Simon Collection

No chapter headers or key. I gave up.

I was really looking forward to this. I've seen some movies based on the plays. I enjoy the style, eras and actors. I had specific plays I wanted to hear first.

When I listen, fiddly doesn't work. REALLY time consuming and annoying to have to listen to the beginning of each section to figure out what they were. Been a member for over 6 years. this will be the second item I've returned.

Good, but missing something

This collection includes ten plays by Neil Simon. All of these had good, if not quite great, production values. There were a few flubbed lines and some of the audio titles are messed up, but the acting and audio quality are generally superb. I really enjoyed a few of these plays, but most I found entertaining yet they left me wanting. Virtually all of these plays seemed to me to be about eighty five percent of a truly great play. They have great characters, dialog, humor, wit, timing, but they we lacking the essential meaning that makes a great play far more than entertainment.

I liked Prisoner of Second Avenue and Barefoot in the Park the best as, in addition to wonderful acting and characters, below the humor and plot there were undercurrents concerning desire and need that brings these plays to near greatness, yet even these left me desiring just a little something more.

The Odd Couple did not move me, but was the most entertaining of the rest of the bunch. It was quite funny and delightfully played.

The coming of age plays including Brighton Beach Memoirs, Biloxi Blues, Broadway Bound, and Lost in Yonkers are all quite good with great characters, lots of laughs and
some poignancy, but were just good entertainment.

The Suite plays Plaza Suite and California Suite are a bunch of short scenes set in hotels. These were my least favorite plays in this collection as they didn't really take me anywhere.

Overall this is a good collection of plays that I am glad to have listened to, but this is not a collection I will listen to again and again.

I want to listen to specific plays and you just have to click all over the place until you stumble onto the right one. I would love a listing of the chapters for reference.

I learned how lucky I am to be living in the "Media Age" of 2014 with so much good material at my fingertips. What was considered good stuff in the 1960s and 1970s when I was a kid now seems weak and barely interesting. There are a few of Neil Simon's plays I would listen to again, but I'd be in no hurry. Want good, old comedy? Try Moliere!

LA TheaterWorks does a good job casting and directing these radio performances. I just wish the material was better.

Was The Neil Simon Collection worth the listening time?

Audible could at least have listed the plays in the order they appear in the audiobook. There is no way I could jump around to find my remembered favorites. Helping readers navigate within books is something Audible is VERY POOR at and SHOULD IMPROVE, as I have commented several times already.

Ten Neil Simon plays written between 1963 and 1991 makes for a great collection of listening pleasure - if you can take some, aah... less than modern mores and views on family and marriage that is. Not a fault of the plays. It's just that they were written and/or played out in times of different values and society customs.

All but two of the plays are performed in front of a live audience. Production value is good and what's more important in (sort of) radio plays - sound is excellent throughout.

Not a collection you would want to (or should) binge listen to, but a play once and again between other books makes for good entertainment.

The Players Hit All the Right Notes

What a treat! Neil Simon's masterpieces performed by great actors,most of whom have acted in his plays on stage, screen, or both. If you like great comedy leavened with some dark undertones, you will love this collection. His autobiographical trilogy is here, the Odd Couple, Barefoot in the Park, and more. My favorite actor, Richard Dreyfuss, is marvelous (if you have ever seen the Goodbye Girl you know why) and so is his costar from that film, Marsha Mason, who performs in a few of these plays. There is also some lovely commentary after a few of the plays which enriched my understanding of Simon's contributions to American theater. Perhaps the only down side is that at times the audio is hard to pick up, and too, some of the material is a little dated. But if you like wit, and if you're in the mood for some nostalgia, pick this one up. There are very few playwrights in American theater who had as many hits.

What a wonderful way to spend some time...

If you could sum up The Neil Simon Collection (Dramatized) in three words, what would they be?

A wonderful set of performances.

Each was genuine, and made the time fly by

You've been warned - it's Addictive!

I'm only done with the part 1 of 3 and I am hating the fact it will end in some certain point. I'm not usually into theatre but this kept me glued. Characters were so well played with Neil's life stories. Totally worth the credit!

Track listing and order of all plays

THE NEIL SIMON COLLECTION, L.A. Theatre Works, Audible
Here are the plays in the order presented.
In the parentheses are the starting and ending track.
Enjoy.

I have seen most of his movies. his plays are even better performed with major actors. I found the narration on this book extremely excellent, since it contained over 24 primary actors. this book was as good as the movies! I found this collection of all his plays wonderfully presented.p

Another title that does not download. An awful app, minimal technical support and customer service.

Neil Simons's plays are well known, a mixture of humour and heart-break. It's odd that LA Theatre Works allows the players' voices to be inaudible at times. Enjoy!