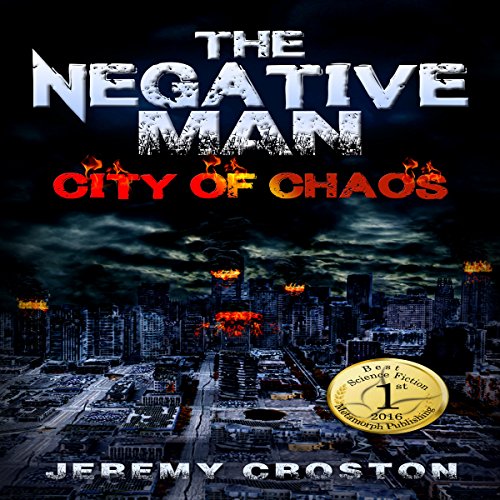 The Negative Man: City of Chaos

By: Jeremy Croston
Narrated by: David Reimer
Try for $0.00

With a city at war, how far is a hero willing to go the line to save it?

Two years ago, a powerful super known only as The Negative Man brought Pacific Station to the brink of destruction. No one dared stand in his way...that was until the arrival of a new hero: The Dark Lion. Another super with the abilities to match up against The Negative Man, the two of them waged guerilla warfare against each other. Most battles ended in stalemates until they met one last fateful time in Waves Park.

Their final battle was vicious, neither man willing to give the other a step. Just when it looked like only more chaos would come from their fighting, something unexpected happened: The Negative Man disappeared. Months went by, and without a sign of his return, the city slowly returned to normal. Unfortunately, new evil has taken hold, in the form of a gang of supers known as The Aces. Led by their charismatic leader, Spades, they have replaced The Negative Man as the faces of terror and destruction.

Once again The Dark Lion is called into duty - to do the dirty, to do what’s necessary. But questions remain: Who are the men behind the masks that The Aces wear? And does The Negative Man still lurk just out of sight?

What listeners say about The Negative Man: City of Chaos

I really enjoyed this book a lot actually. It kind of reminded me of all the super hero type shows, but better. I really want to hear more of this series. And the ending? OMG, I totally did not see that coming! Very entertaining. I most definitely recommend. The narration was also very well done. I def want more!!!

This book was given to me at my request. I am providing a voluntary and honest review.

Great story with some nice twists along the way. On point narration by David Reimer as well. I highly recommend this audiobook and look forward to the next part.

Interesting and narration is mixed.

Annoying buzzing sound like the mic is really low quality but the voice acting is amazing so I’m torn on the narration.

The story is good a few funny moments from main stream supper hero names being involved in things in the beginning.
First 1/3-1/2 of the book is interesting, gets slightly boring/predictable nearing the middle but picks up really well nearing the end and makes me want more.
I would say give it a shot and hang on till the end!