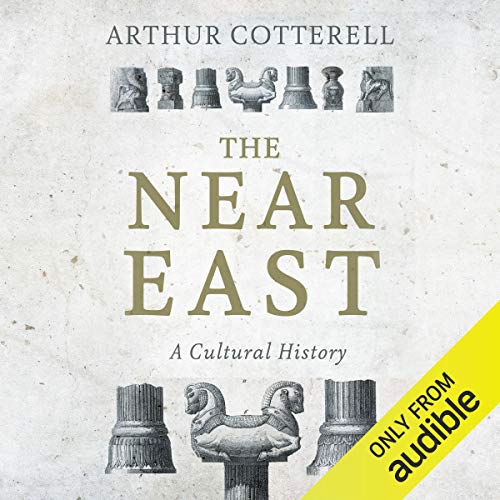 By: Arthur Cotterell
Narrated by: Liam Gerrard
Try for $0.00

A sweeping cultural history of the Near East, from the birth of civilisation to the present day.

The Near East was the cradle of civilisation: the Sumerians invented urban living and writing here, and monotheism was born and spread across the globe. Arthur Cotterell vividly sketches the extraordinary cultures that have left their mark on the region, from their early myths, deities and rituals of worship to their pioneering political systems and military conquests.

Charting the rise and fall of Assyria and Babylon, the world's first great powers, then exploring the long eras of Persian, Byzantine, Arab and Ottoman rule, The Near East traces the legacy of this rich past through the destabilisation of Western imperialism and beyond.

This enthralling narrative shows how history has shaped the beliefs, traditions and politics of the Near East, one of the world's most creative, diverse and yet troubled regions.

What listeners say about The Near East

Not the greatest introduction.

The author states that the work is intended to fill a gap between travel guides and academic works. By this metric it fails. The book is structurally confused with lengthy digression within digressions. Peoples and places are introduced without any attempt to put them in context. It can only really be followed if you have a robust understanding of Near Eastern history already. Particularly through the early part of the book, the author habitually jumps back and forth over a two thousand year span with no real indication that fundamentally different periods are being discussed. The end is also extremely abrupt with no reflection or conclusions drawn from the preceding text. Credits just roll. Generally good narration.