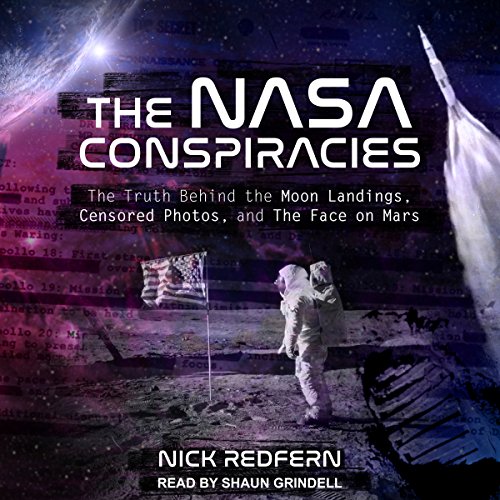 By: Nick Redfern
Narrated by: Shaun Grindell
Try for $0.00

The National Aeronautics and Space Administration - NASA - was established on July 29, 1958. Ever since that day, NASA has been at the forefront of efforts to explore outer space, resulting in the Apollo missions to the moon, the Skylab space-station, and today's space shuttle. But behind the open face of NASA, there is a much more mysterious world. NASA has been linked to a wealth of high-level cover-ups, including:

The NASA Conspiracies throws open all the doors that the Space Agency has kept closed for so long.

What listeners say about The NASA Conspiracies

This book is not only interesting, it points towards so many other sources. Some of the sources I have looked into with my husband, and others made me realize that I have homework to do...

This book was presented and read well but I thought it would be more about actual NASA anamolies and questions, like with the Moon landing and objects in space. instead it was mostly a tired re-telling of boring alien abduction stories and UFO sightings. Fine if you are into that but I was hoping for more official NASA conspiracies, not UFOs.

Great audio book ! Totally believe in the subject matter ! The truth will come out !

really enjoyed, very informative, also enjoyed the narrator. I would recommend to the curious minded.

Excellent read.....Factual and to the point. Not much new information, however still quite relevant. Good reading!

Very interesting everyone should read this book.

Loved it. The narrator was good I thought more than once he was talking about himself!

Where does The NASA Conspiracies rank among all the audiobooks you’ve listened to so far?

I like this book. Notice I don't say that I believe what's in it, but it was fun.

A good, clear and flowing narration. Easy to listen to.

Thought provoking, yet improbable. Leaves me with a "what if half of it was true?" sort of feeling. Certainly well done and entertaining.

Not for the tin hat wearers perhaps as the book begins by debunking the moon landing conspiracy and other 'out there' ideas.
The book is very easily listened to and often has the listener thinking 'oh that's interesting' and I'd like me researching in more detail. The NASA conspiracy is a genuine concern to all right minded people in the free world and paints a disturbing picture of cover up after cover up.

Obviously it's all open to individual beliefs but this audiobook is certainly worth a listen whatever side of the fence you sit on.
The performance is first rate and almost makes you feel as though the narrator is talking exclusively to the listener.
Highly recommended

The book elevates groundless speculation to a stratospheric level don't waste your money on it.

This in an interesting listen if you are new to conspiracy theories or interested then it is well worth a listen. Not too in depth to alienate and not too vague for tenured theorists