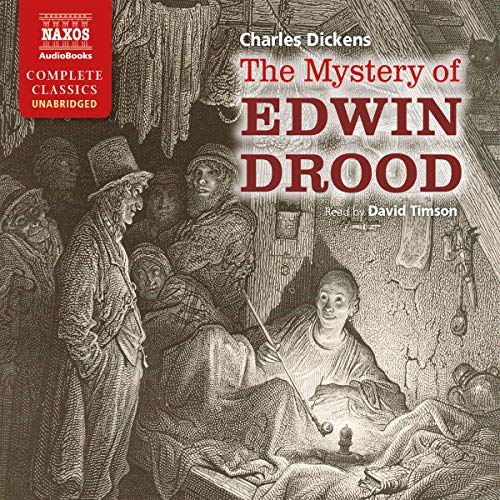 The Mystery of Edwin Drood

By: Charles Dickens
Narrated by: David Timson
Try for $0.00

Left unfinished after Dickens died in 1870, The Mystery of Edwin Drood centers on Edwin Drood's uncle, John Jasper, and his love for Rosa Bud, Edwin's fiancee. Set in the dark, fictional cathedral city of Cloisterham, the novel is awash with guilt, disguise, and mystery. It contains some fine writing, and just before his death, Dickens left an indication of where the plot was going, which is included.

What listeners say about The Mystery of Edwin Drood

The first chapter of The Mystery of Edwin Drood (1870) begins with a nightmarish opium-vision involving a cathedral spike on which an impaled body ought to be writhing, until the spike seems to resolve itself into the rusty post of an old bed, on which a man is "shaking from head to foot" as he lies next to the drug-stupored bodies of "a Chinaman" and "a Lascar," while the mistress of the den, "a haggard woman," offers him another lit pipe. Later that same day, the man dons his white robe and joins the choir of a Cathedral for the vesper service. Yikes, this is vintage Charles Dickens, but perhaps a Dickens with a darker urgency than in his earlier novels.

The novel is mostly set in Cloisterham, a moribund Cathedral town peopled by or visited by plenty of "Dickensian" characters, ranging from the grotesque and comic to the malevolent and innocent, most equipped with idiosyncrasies. There are Edwin Drood and Rosa Bud, a pair of orphans engaged to be married from when they were infants by their fathers' wills; Neville and Helena Landless, mysterious orphan twins from Ceylon; Hiram Grewgious, the kind-hearted and "particularly angular" lawyer; Thomas Sapsea, the egotistical auctioneer/mayor; "Stony" Durdle, the alcoholic stonemason; Deputy, the demonic-cherubic stone-throwing urchin; Dick Datchery, the stranger with an unbelievably thick shock of white hair; Rev. Septimus Cripsarkle, the physically and spiritually fit minor canon; and the conflicted choirmaster John Jasper, uncle of Edwin and music teacher of Rosa. Dickens sets their fates in motion in a melodramatic murder mystery plot for which we can guess the identity of the villain early on but are left wondering about his psychology and fate, until we reach the end of Chapter Twenty-Three, at which point Dickens died, leaving his last novel, The Mystery of Edwin Drood (1870), tantalizingly half-finished.

Dickens was a genius and a pro, so most of what he wrote has much of interest in it, and his last book is no different. Plenty of funny, original, and apt descriptions of his grotesque characters. "Miss Twinkleton, in her scholastic state of existence, "is as ignorant [of matters of the heart] as a granite pillar." The philanthropy of the great philanthropist Honeythunder "was of that gunpowderous sort that the difference between it and animosity was hard to determine." And Mrs. Billickin "came languishing out of her own exclusive back parlour, with the air of having been expressly brought-to for the purpose, from an accumulation of several swoons."

Dickens of course also writes plenty of evocative descriptions of places, as in moonlight and sunlight scenes of the cathedral.

"They enter, locking themselves in, descend the rugged steps, and are down in the Crypt. The lantern is not wanted, for the moonlight strikes in at the groined windows, bare of glass, the broken frames for which cast patterns on the ground. The heavy pillars which support the roof engender masses of black shade, but between them there are lanes of light. Up and down these lanes they walk."

"Cloisterham is so bright and sunny in these summer days, that the Cathedral and the monastery-ruin show as if their strong walls were transparent. A soft glow seems to shine from within them, rather than upon them from without, such is their mellowness as they look forth on the hot corn-fields and the smoking roads that distantly wind among them."

And Dickens gives a dark underpinning to his human dramas: "They were but a sign of broken joys and baseless projects; in their very beauty they were (as the unlikeliest of men had said) almost a cruel satire on the loves, hopes, plans, of humanity, which are able to forecast nothing, and are so much brittle dust. Let them be."

However, for all his professional genius (or maybe because of it), at times Dickens seems to go on autopilot riffs that don't seem to visibly advance the plot, significantly develop character, or appealingly tickle this reader's funny bone. One example might be the cold war waged by Miss Twinkleham and Mrs. Billickin over what should be prepared for dinner.

And, after all, the novel is unfinished…

David Timson gives his usual wonderful and dexterous reading of a novel, enthusiastically and variedly voicing the lines of all the characters, taking especial pleasure with Grewgious, Deputy, and the opium den mistress, Princess Puffer, who is quite scary.

In conclusion, any of Dickens' completed novels would probably be better to read before The Mystery of Edwin Drood, but for people who have read most of his other works, this book is an impressive flash of the master's brilliance.

David Timson gives his all in this terrific recording of Dickens' last novel. Dickens died with only about half the book done. Given that the published part shapes up as a murder mystery, it's a particularly tantalizing and sometimes frustrating read. But despite the lack of closure, the trademark Dickens characters and dialogue are all there.

Timson closes with a brief summary of the circumstances surrounding the writing of the novel. He ends with a passage from Dickens' close friend and biographer John Forster, giving an outline of the probable conclusion, based on letters Dickens wrote to Forster at various points in the planning of the novel.

As Always A Success of Story Telling

I love this author and have since a child. It was quite a surprise at the end to find out the author's demise.

A shame he didn't get to finish it

Though the story was a bit slow to start, it is worth having a bit of patience. It is a good story, has Dickens' great use of the English language and wit, and though the end (as told about in the afterword) is a bit predictable, the way there is quite enjoyable, and it is a shame he did not get to finish it. The narrator is a master! What voices, accents, acting! Fantastic!

Be Aware of The Ending...

Could you see The Mystery of Edwin Drood being made into a movie or a TV series? Who should the stars be?

I hadn't realized that this book was unfinished so I was fairly disappointed by the ending. That said, the writing was typically Dickensian and the narration was good.

Thoroughly enjoyed this audio version of "Edwin Drood". The reader (David Timson) has a voice which is itself easy to listen to and clear, but which he uses with remarkable versatility in bringing the voices of each character to life. From the bumptious Mr Sapsea to the kind and wise Mr Crisparkle, the wizened opium pusher to the delicate Rosa, each character emerges from the narrative merely by the use of voice. Even the city and the weather are given colour in this reading. Quite excellent.

Hard to imagine a better reading than this. David Timson is an outstanding narrator, and while it’s a shock to finish the book in its cliffhanging ending, it’s a superb journey. Late Dickens at his best.

Great story though sadly unfinished! very good reader, he does all the different voices excellently.

I found this book to be the least interesting of any Dickens book I have read.
I thought the narrator was excellent .

Excellent narration of a tantalising classic... Dickens' last work and one in which the cast of characters are more intricately involved in each other's fates than in many of his other novels.