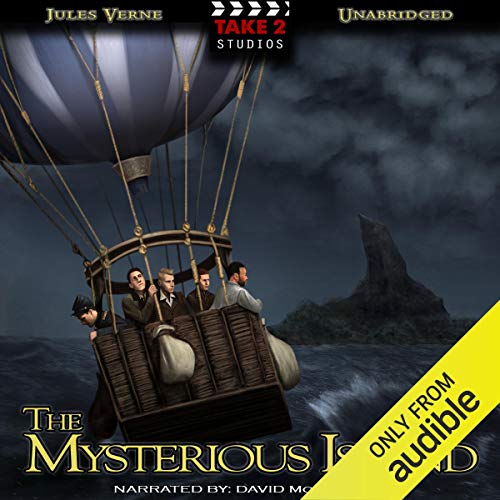 By: Jules Verne
Narrated by: David McCallion
Try for $0.00

Like many Jules Verne classics, The Mysterious Island takes you on an unforgettable journey of adventure and reflection. During the American Civil War, a group of Union soldiers escape their confederate captors when they steal a balloon. What they didn't anticipate is the violent storm that awaits them and leads them into uncharted territory.

When the storm-damaged balloon crashes, the men are marooned on a desert island. While awaiting rescue, the soldiers must work together to stay alive by making use of their survival skills and taking advantage of the vast resources on the island. Eventually, the men make the island into a home away from home, naming it Lincoln Island, after President Lincoln.

All is well until the group discovers a box of guns and ammunition that shouldn't be there. They begin to suspect the mysterious island may have its own secrets. Can the men survive long enough to be rescued off the island?

What listeners say about The Mysterious Island

One of Jules Verne’s Best

The Mysterious Island is the book that got me hooked on scientific adventures long ago. I read this as a kid and decided to reread it again as an adult. There are several aspects of this story that make it a must-read for children and adults alike.

The Mysterious Island is a fantastic sequel to 20,000 Leagues Under the Sea, following the story of four Confederate POW prisoners who escape and become castaways when they crash land on an island. It tells of their quest for survival on the mysterious island and how they make use of science to create something out of practically nothing.

In spite of its age, this book won’t fail to keep you on the edge of your seat and is one of Verne’s best works. The reader, David McCallion, did a wonderful job in reading this book. I truly enjoyed his accent and character differentiations. This is the perfect book for those who like adventure and intrigue, along with a good dose of science fiction.

This was a fantastic listen, while on the night crew, cleaning messy wineries. I highly recommend it.

Would you consider the audio edition of The Mysterious Island to be better than the print version?
Verne is my favorite author, but The Mysterious Island has eluded me for forty years. The fact that the author interweaves exhausting details of the flora and fauna of the island into nearly every page has made it impossible for me to not lose focus the many times I've attempted to tackle it. This audio book with it's 19 hours and 8 minutes of narration was listened to on and off over the span of two weeks, including a seven hour road trip and a ten hour working in my basement weekend. If it weren't for this excellent audio book, I might never have read this incredible book.

What did you like best about this story?
Anything Vernian excites me. The story introduced me to Verne's 1870s world view, his politics, his religious convictions, and his fluid writing style.

What does David McCallion bring to the story that you wouldn’t experience if you just read the book?
The narrator brilliantly added unique characterizations to each of the castaways and never lost his ability to keep the story going. He was clearly well-prepared to narrate and it shows in his clear voice.

Was there a moment in the book that particularly moved you?
In general, the book made me long for quality classic literature. Clearly, the most exciting moment for me was when Captain Nemo makes himself known to the castaways. The character of Captain Nemo is one I wish Verne could have devote more stories to.

Any additional comments?
Do not let the length of this audio book discourage you from jumping in. I consider the completing of it a conquest but now I want more conquests.

I usually dont read books but this book Lighted the fire

This is most likely the best book i have ever ”read” good Reader and One of the best Authors And a an incredible story.

Another fantastic book from Mr. Verne

Great writing, if a little old fashioned, which is to be expected from a book that was published in 1875. Expect that some of the terms that are used will most likely be foreign to some readers, but in my opinion it's manageable with context clues.

What a great story and conclusion of 20,000 Leagues Under the Sea. The reader did a great job.

I'm speechless!! this was by far my favorite Jules Verne book...with a surprise.😏😊, just sayin prepare yourself

This is a good translation. Read more about Jules Verne translations and character names, i learned a lot by doing research before purchasing this. It’s Jules Verne, so no need to comment on the story. The narration is good, but could be better. The only reason i say this, the voice acting of the ailing and older characters are similarly over the top. The narrators voice is consistently distressed for characters of age or hardship regardless of character state. The tone and spirit of the narration did not change as the mentioned characters transitioned between hardship and glee. Having said that, it is an overall entertaining well done narration. Everything is clear, vivid, and the island’s mysteries come alive without distraction.

But not funny when you actually desire a realistic performance and are dealing with a 20+ hour book.

The way this guy read his lines made me feel like I was listening to a parody of “stage” in a Geico ad.

The story itself is a classic. And unfortunately as of the time of this review, none of the other recorded versions of the book available on Audible were any better. So this is, indeed the best of what’s out there. But that doesn’t stop it from still being horrible.

A really refreshing read. Nothing complex and rather the literary equivalent of watching a black and white movie. The story was interesting and had plenty of small hooks to maintain your interest. Though a little dated in various ways, the characters were interesting. I found it 'amusing' that a beautiful bird was being described one moment and then next it was being shot. In fact they shot at almost every living creature even if they didn't seem to need food or had already shot enough to feed a large party. No wonder their peers wiped out the dodo. Though I read the book quite a few months ago, I remember the experience well.

I miss it already

Jules Verne was a genius, of that there is no doubt. A man before his time. This audible book does his story credit, almost like watching a movie. The only reason I gave 'performance' a 4 star was because of the comedic portrayal of Pencroft. Well, I got a laugh at least. Altogether, a magnificent work.

Mr Producer please produce... the reading is full of mis-pronunciations.

so dosappointed tha this classic is spoilt by poor pronunciations and sad characterisations. would be better tp do straight reading than poorly represent the characters.