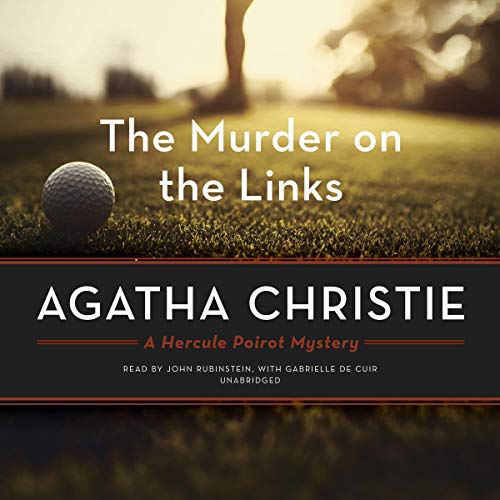 The Murder on the Links

Not one, but two dead bodies are discovered on a French golf course, leaving Hercule Poirot to unravel a grisly conundrum.

Hercule Poirot receives an urgent cry for help from a client summoning him to France. But he is too late, and arrives to find his client face down in a shallow grave on a golf course, brutally stabbed to death, and dressed in a too-large overcoat with an impassioned love letter in the pocket.

With a long line of suspects including the victim's wife, his embittered son, and his mistress, Poirot works to unravel the mystery.

But before Poirot can discover the meaning of the clues, a second, identically murdered corpse is found....

What listeners say about The Murder on the Links

I had to bail on this as the actor playing "Cinderella " was awful. At times it sounded like she was reading her lines at other times self conscious over acting was cringey. She annoyed me so much
And the character states she was born in the US but raised in Great Britain. So why does she have an American accent? I can usually ignore a poor narration if the story is good but I couldn't get past this.

murder on the links

loved the narrator and his ability to do voices with ease. He kept my interest the whole story without falling into melodrama

so good. very entertaining. This mystery has stood the test of time. I thorouly enjoyed the story line and the narration of said mystery. What fun it was!

Such a lovely production

The story is a classical cozy mystery and performances are amazing all around. I particularly enjoyed the French accents.

Just as good 2nd time around

I've read this one before and re-reading it, after time enough to forget details, I still didn't figure it out before Hercule did. (managed to solve it before Hastings though)

didn't know this one, glad I found it

I had never heard of this book. after listening to Agatha Christie's autobiography I decided to listen to the Hercule Poirot series in order.
this one was very enjoyable. it is fun to think about what she may have been thinking when she wrote. enjoy!

Not the right narrators

I love these narrators! I know them from several books in the Enderverse, and I can't imagine anyone else playing those characters. That said, they are not the right voices for this book.
It's the lack of accents I think. Poirot MUST have an accent, Hastings too. Cinderella was... ok, I guess, but seemed kinda...bi***y, or flippant or something.
That said, I only made it a few minutes into the 2nd chapter before I had to download a different version with a different narrator. Since I haven't finished the book, I didn't rate the story.

I gave up on this narration because the French accents are way too heavy and the narrator is so emphatic and unnatural. Hugh Fraser's narration is much better.

Had never read "The Great AC". Two books into the series, disappointed to find just average writing that did not age well.

Production wise. the French accent the voice actor uses is so thick, it's hard to understand even the English words at times. I understand trying to be authentic, but for such a wide audience, you need to play a little more to the lowest common denominator.