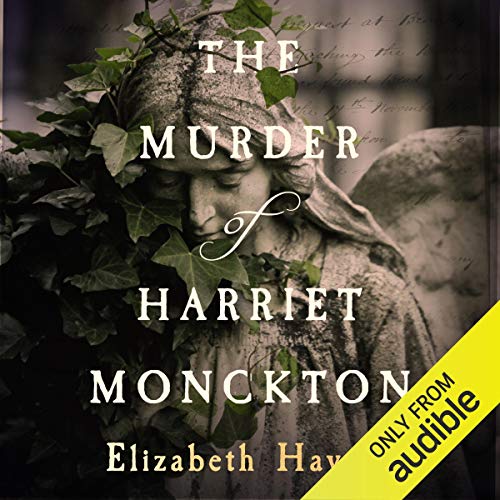 The Murder of Harriet Monckton

The Times 100 Best Books for Summer

From the award-winning and best-selling author of Into the Darkest Corner comes a delicious Victorian crime novel based on a true story that shocked and fascinated the nation.

On 7th November 1843, Harriet Monckton, 23 years old and a woman of respectable parentage and religious habits, is found murdered in the privy behind the chapel she regularly attended in Bromley, Kent.

The community is appalled by her death, apparently as a result of swallowing a fatal dose of prussic acid, and even more so when the surgeon reports that Harriet was around six months pregnant.

Drawing on the coroner’s reports and witness testimonies, Elizabeth Haynes builds a compelling picture of Harriet’s final hours through the eyes of those closest to her and the last people to see her alive. Her fellow teacher and companion, her would-be fiancé, her seducer, her former lover - all are suspects; each has a reason to want her dead.

Brimming with lust, mistrust and guilt, The Murder of Harriet Monckton is a master class of suspense from one of our greatest crime writers.

"Haynes tells much of the story through the voices of those closest to Harriet: the hypocritical minister who mistakes his own desires for the wishes of God; the shy young man who wishes to look after her; the fellow teacher with her own yearnings for love. Eventually, through a diary, we hear Harriet herself speak. A thoroughly absorbing whodunnit, with an unexpected conclusion, Haynes’s novel is also a touching portrait of a young woman unjustly stigmatised by the prejudices of the day." (Nick Rennison, The Sunday Times)

"Actual documents from Britain’s National Archives concerning inquests into the November 1843 demise of Harriet Monckton, an unmarried, secretly pregnant 23-year-old teacher, serve as the springboard for this rich psychological crime novel from Haynes (Never Alone). The author weaves together snippets of testimony from the official investigation in Bromley, Kent, with fictionalized accounts from several of the key figures in Harriet’s life—and suspects in her death — among them the charismatic but deeply flawed Rev. George Verrall; fellow schoolmarm and discreetly infatuated best friend Frances Williams; former lover Richard Field; and handsome Thomas Churcher, the kindhearted cobbler too shy to declare his love. Readers also hear from Harriet herself, via a (fictional) 120-page diary. Though this suspenseful account of a case that remained unsolved in real life — unlike the novel — feels overlong, Haynes vividly brings to life an intellectually curious, vibrant young woman ill-suited to the strictures of Victorian village life. Historical mystery fans will be rewarded." (Publishers Weekly)

"Probably the best historical crime novel I have ever read. Elizabeth Haynes’ skill as a writer was in every word of every page; not once did I doubt that I was in Bromley in 1843. The characters were superb: villains, lovers, friends and Harriet herself were so well-formed with distinctive voices. The mystery was gripping and I was thrilled to discover I’d guessed the murderer wrong. Haynes passion for Harriet’s story (it's based on a real crime) is the life blood of this book and I found the Afterward about the author’s research very touching. Captivating, masterful and moving this is one book—and one death—I will remember for a very long time." (C. L. Taylor)

What listeners say about The Murder of Harriet Monckton

While based on a true story & well written the author fictionalizes s great deal of the story which is great if you like fiction but I do not. I bought it expecting true Crime.

A bit long and slow in the middle but entertaining

The middle part of the book (2nd inquest) was a bit boring and weary but most the book was fun to listen to...although "proper" women in those probably did go out walking alone with a chaperone...and most likely were a bit more guarded than the women in the book. All in all though, it was a good book!

Very enjoyable, despite a couple of anachronisms

Excellent narration drives this forward, and using several readers works well. Nicely executed fictionalisation of a real life murder case, with a sympathetic main character and good representations of self delusion and hypocrisy. A minor gripe is that sometimes the language used and the unlikely liberal attitudes of some characters sounds more like the author’s own voice, but not enough to spoil my enjoyment.

How clever is Elizabeth Haynes? It must be so much harder to write a story when the truth dictates you take a specific path, combine imagination with fact. The Murder of Harriet Monckton is an example of how fabulous Historical Fiction can be when written by a hugely talented author. This book is full of atmosphere, there are times of terrible darkness and moments of love and light. It certainly is a clear display how far women have come in nearly 200 years, and reminds us of how hard our predecessors had to fight for equality. All the narrators work hard to bring an already inspirational book, to life. The language used is incredibly well researched. No stone is left unturned in Ms Haynes quest to make this the best book in its genre. I have always been a fan of Elizabeth Haynes and this book ensures there can be no doubt she is a masterful and top notch writer. This is a 'MUST BUY' book, in fact it's a 'MUST BUY IMMEDIATELY' book. But don't stress, you can thank me later!

i must admit I have been an ardent follow of Audible books since they began. Having something like 700 books on my iPod I am a seasoned listener and rarely return books, let alone write damning reviews. Perhaps my expectations were too high for this slow-moving plot, as I see there are many positive reviews. Nevertheless I was disappointed in this purchase and am about to return it. I guess if I were a day-time listener, rather than a night-time one, I might have been able to stay awake long enough to enthuse about this book, be more accepting of the poor narration of some of the characters, and perhaps even have enjoyed the whole 16 hours!

what a great story! very well written and really drew me in. definitely with a listen. really enjoyed the different perspectives of characters. well performed.

What a great book, really well researched, fab narrators!
Definitely one book that I would recommend!

Based on the true story of the murder of Harriet Monckton, for which no one was ever charged , Elizabeth Haynes has constructed a gripping story and provides a possible solution to the crime. Told through the testimony of four main characters connected with Harriet - and through Harriet's own, (fictional) journal, the story unfolds through the different viewpoints of these characters and their various relationships with Harriet, with potential suspects changing as new information is revealed. In the best the listen tradition, Haynes doesn't reveal the person she has identified as the murderer until the very end , and it is well worth the wait to discover her explanation of the crime. As ever, audio books stand or fall by their narrators. In this case there are five different actors who read the parts of the five main characters - which makes it easy for the listener to recognise which character is speaking . All of the performances are excellent but a special mention to Becky Wright who reduced me to tears by her sensitive performance of Harriet, describing her life slowly disintegrating around her.

Great story that just built and built as it went on. Fantastically written and beautifully narrated (the cast was seriously good in this one).

November 1843. A young woman, 23-year-old Harriet Monckton, is found dead in the privy behind the chapel in Bromley, Kent. It appears she died from swallowing prussic acid, but when the autopsy reveals she was also six months pregnant, the community begin to wonder who might be responsible, and if she was deliberately killed to cover up a secret liaison. Using coroner's reports and witness testimonies, Elizabeth Haynes reimagines Harriet's last days through a series of accounts from the people who were closest to her, many of whom may have had their own reasons for wanting the young woman out of the way.

Based on a true story that shocked the nation, Elizabeth Haynes has taken a classic Victorian unsolved murder and suggested motives for the death. Though the personal records are fictional, the author’s portrayals are realistic and scarily persuasive. Haynes writes in a way that captures the mood of the community, its customs and traditions and relates all in a variety of voices and personalities that comes over as genuine and entirely feasible. With so many suspects who could easily be cast in the role of murderer, the author’s suggested solution, though chilling, makes perfect sense.

By turns fascinating, heart-breaking and utterly compelling, this is a brilliantly-crafted book that is a must for all true crime fans.

This is a beautifully told story, and one I am glad I listened to. I felt endlessly sad for Harriet. Quite dark, and sad at times, but with a great deal of humanity and depth.