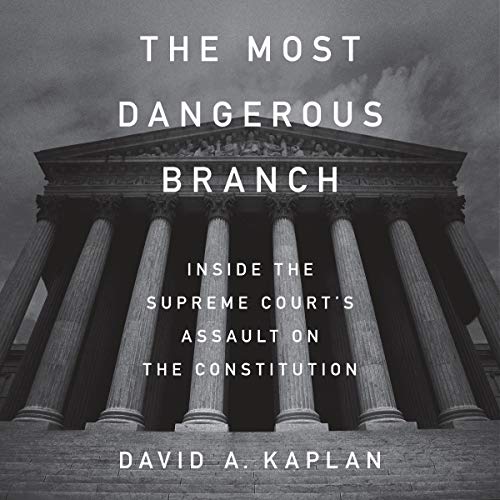 The Most Dangerous Branch

In the best-selling tradition of The Nine and The Brethren, The Most Dangerous Branch takes us inside the secret world of the Supreme Court.

David A. Kaplan, the former legal affairs editor of Newsweek, shows how the justices subvert the role of the other branches of government - and how we’ve come to accept it at our peril.

Never before has the Court been more central in American life. It is now the nine justices who too often decide the biggest issues of our time - from abortion and same-sex marriage to gun control, campaign finance, and voting rights. The Court is so crucial that many voters in 2016 made their choice based on whom they thought their presidential candidate would name to the Court.

Donald Trump picked Neil Gorsuch - the key decision of his new administration. The newest justice, Brett Kavanaugh - replacing Anthony Kennedy - is even more important, holding the swing vote over so much social policy. With the 2020 campaign underway, and with two justices in their ’80s, the Court looms even larger. Is that really how democracy is supposed to work?

Based on exclusive interviews with the justices, Kaplan provides fresh details about life behind the scenes at the Court: the reaction to Kavanaugh’s controversial arrival, the new role for Chief Justice John Roberts, Clarence Thomas's simmering rage, Antonin Scalia's death, Ruth Bader Ginsburg's celebrity, Breyer Bingo, and the petty feuding between Gorsuch and the chief justice.

Kaplan offers a sweeping narrative of the justices’ aggrandizement of power over the decades - from Roe v. Wade to Bush v. Gore to Citizens United. (He also faults the Court for not getting involved when it should - for example, to limit partisan gerrymandering.) But the arrogance of the Court isn't partisan: Conservative and liberal justices alike are guilty of overreach.

Challenging conventional wisdom about the Court's transcendent power, as well as presenting an intimate inside look at the Court, The Most Dangerous Branch is sure to rile both sides of the political aisle.

“If Brett Kavanaugh’s Supreme Court confirmation hearings have inspired you to dig deeper into the intricacies of the nation’s highest court, look no further than a new book devoted to the subject.... Kaplan writes in an engaging fashion throughout this detailed book.... The Most Dangerous Branch couldn’t be better.” (Associated Press)

“Describe(s) the behind the scenes dealing that led to the appointment of the sitting Supreme Court.... Presented at a level of granularity with which you may not be familiar. It makes for engaging, if not reassuring, reading.” (NPR.org)

“A fascinating look at the Court during one of its most important, and divisive, eras...a perfect primer for helping Americans understand how members of the court came to justify their excessive involvement in various controversial issues." (The Christian Science Monitor)

“This is a book for our times. As the Supreme Court has become a focus of elections, confirmation battles and partisan decisions, The Most Dangerous Branch tells the story, in a compelling way, of the 'triumphalism' of the justices, both liberal and conservative. It warns against the increasing power of what was supposed to be the least dangerous branch - nine unelected judges who allocate to themselves decision-making authority over issues that should be left to the elected branches. Read it and start worrying. Then demand change.” (Alan Dershowitz)

What listeners say about The Most Dangerous Branch

This book is a little tedious at times, but well worth slugging through. No matter what side of the fence you’re on, it will ask you to re-think your ideas about the Supreme Court.

Engaging critique of the court’s methods

This book usually reads more like an investigative exposé into the inner workings of the Supreme Court and its less-than-ideal members. The author lays out a case for how the Court has subverted the overall democratic process starting around the ruling of Roe and continuing into the present, albeit now under the sway of a different political party. He deftly points out the hypocrisy of many of the Justices responsible for these shifts, as well as the consequences of the court being transformed into just another political branch.

Naturally, the book itself is required to make a number of judgments about the Court’s motives. Readers may not always agree with the logic presented by the author, but most will find it worthwhile to hear the entire argument against judicial activism and the detrimental effects it has caused within the past few decades.

For supreme court aficionados This is excellent listening material. However the authors attempt to Criticize the gay rights rulings along with the other bad rulings Seamlessly then ends by criticizing the dissents. It’s a comprehensive review oh justices going back till Warren Burger in varying capacities with concentrations on the most recent decades.

Not impressed with this one.

I found this to be full of personal appoint. Not what you would expect in academic work. I would pass it by.

Not at all what I thought

I’m a lawyer so I’m into the courts and history. I thought this would be about cases and the past justices. Nope. I couldn’t get past the third chapter—too political. Like everything else liberal, he’s obsessed with Trump. The court is not meant to be a political branch.

Great book on the Supreme Court.

I consider myself to be progressive and because this book is political I thought that was important to say, however I recommend it to a friend that is very conservative and we had surprisingly similar reviews. We we're both pleasantly surprised at the authors willingness to call out hypocrisy in both parties. The Supreme Court has become another partisan branch of government and this book really helps explain how that happened and even suggest a few remedies.

In a word: disappointing.

As a legal scholar I found the utilization of Windsor as the crescendo for demonstration of the supreme Court as the quote most dangerous branch to be insulting to my intelligence.

This book is an excellent summary of the first 2 decades of the 21st century -obviously in jurisprudential terms. How one branch of government has deemed it in its purview to perform other functions that should be delegated to the legislative and executive divisions is mind-blowing. Personal convictions about particular cases and their results are put aside and an objective analysis of the reality of what Scotus has become is narrated.

Kaplan’s book makes a strong case that high profile cases that delight the left or the right - depending on the outcome - degrade democracy over time.

This man knows both much and little of the constitution. Kaplan knows plenty of quasi facts but also has no common sense For instance, he claims that textualism and originalism/constructionism are antiquated ways of observing the constitution / Bill of Rights, and would keep us as a society in the '18th century' … This on face value may seem reasonable but upon deeper rendering it would be foolish to ignore that the founders have a constitutional amendment process --which was reserved in order to allow THE SOCIETY AS A WHOLE to bring the constitution and Bill into the modern era at THE SOCIETY'S PACE. The Society's pace may be a disagreeable one in the eyes of Kaplan but I prefer the people to have a collective say in whether the country should change and not a group of elitist bureaucrats so separated from the average American that they no longer have the floor upon which they both stand in common. Kaplan does a good job at trying to sound 'centrist' or reasonable, likely because most individuals interested in this sort of book are likely more right of center. Perhaps hes trying to change minds...simple minds he may indeed change. Originalism and constructionism are simply keeping the constitutional language as the framers intended it, BECAUSE the framers were avoiding this society becoming like the ones they escaped from ….LIKELY England, Spain, France, the middle east, etc... AND why change the intent of our framers if not for nefarious purposes?? Changing the original meaning of anything including language is definitely a suspicious way to teach law or any subject. Once again the framers established an amendment process for modernization of the constitution--- to then inclusively create rifts in the intelligibility of the language is to have quicksand underneath you rather than a solid and structured understanding of where things began---so that potential recurring perhaps errors could be avoided in the future. The law is like mathematics and Arabic in the sense that it is language of sorts...with rules one must follow to understand. Why would one have you read Arabic text and explain that you should use different rules to determine the meanings of this text?? Insidious purposes, indeed.