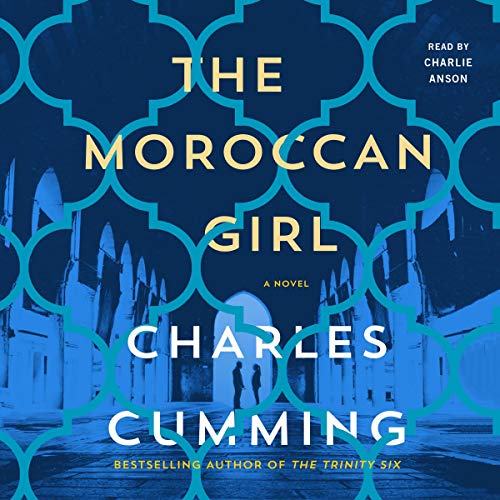 In this gripping contemporary thriller, a successful spy novelist is drawn into a real-life espionage plot when he’s ordered to find a mysterious fugitive on the alluring but deadly streets of Morocco.

Renowned author Kit Carradine is approached by an MI6 officer with a seemingly straightforward assignment: to track down a mysterious woman hiding somewhere in the exotic, perilous city of Marrakesh. But when Carradine learns the woman is a dangerous fugitive with ties to international terrorism, the glamour of being a spy is soon tainted by fear and betrayal.

Lara Bartok is a leading figure in Resurrection, a violent revolutionary movement whose brutal attacks on prominent right-wing public figures have spread hatred and violence across the world. Her disappearance ignites a race between warring intelligence services desperate to find her - at any cost. But as Carradine edges closer to the truth, he finds himself drawn to this brilliant, beautiful, and profoundly complex woman.

Caught between increasingly dangerous forces who want Bartok dead, Carradine soon faces an awful choice: to abandon Lara to her fate or to risk everything trying to save her.

More praise for The Moroccan Girl:

"Narrator Dan Bittner is back...bringing his full array of fantastic character voices...Bittner excels at combining drama and comedy in just the right proportions to make this audiobook a thoroughly enjoyable ride." (AudioFile Magazine)

What listeners say about The Moroccan Girl

A spy novel in watercolor

After the vivid characters and their interwoven agendas in Cumming's preceding A Colder War and A Divided Spy, this story and everyone in it just shimmers on the surface. I never got a handle on any of the people involved, much less the incredibly dumb opener that sets up this book. The constant references to the movie Casablanca, the either too-sour or too sweet smell of every North African encountered (what's up with that?), and the heavy-handed mysteries of the nefarious bit players were just too tiresome and boring to continue until something happened.. Could not possibly recommend this to anyone. But if you haven't read his earlier work, please do. Trinity is a great treatment of the Cambridge Five and In a Foreign Country is also excellent.

I had high hopes for this book: positive reviews, an exotic setting and espionage! Unfortunately very early on it was apparent that this was the writer’s knight in shining armor/James Bond wanna-be/Everyman hero fantasy. The titular character was neither Moroccan, nor a girl. She was the only female character in the book (beyond prostitutes and a weary wife of an unfaithful husband) and carried the heavy burden of trying to add realism to her femme fatale caricature, while being so overwhelming bewitching that most men fell at her feet and then risked their very existence for her. The plot was truly laughable-a bored, lonely writer is recruited by a spy ostensibly because he wrote well about espionage and happened to be taking a trip to Morocco (deep state intel via his Facebook page). Although the main character is often paranoid and unsure (much of the book is his insecure inner dialogue), he becomes the “girl’s” savior-punching out adversaries (he takes boxing lessons at home!) and saving her life countless times. She repays him with the only thing she’s been given as a character...well you can imagine. One ridiculous scene involved the main character who happened to walk in on the “girl” who happened to be sleeping naked. It was so implausible that it seemed to have been slipped in only to sexualize her further and as justification for a nude scene in the film version. The reader was good although his “girl” character voice wasn’t seamless and why do all Americans sound like John Wayne?

A little too far fetched..

The plot was just a little too far fetched.. the “romantic interest” was resonant of a stilted and over-restrained 1950s description of romance...

Just not that good...

if you don't mind losing hrs of your life.

I have read and enjoyed all of authors other books. This reads like he wrote it for high school project. writing is as naive and foolish sounding as this story's first time spy. with expression's like "we're going to eliminate him". i only finished it because i hoped something interesting could eventually happen. Writer appears, in the last pages, to want to create a series. from this character...not a good idea.

Good story, excellent narrator!! I’ve read most of Cumming’s books, and this is better than most. Especially enjoyed the performance— tone and approach is exactly how I’d expect a reluctant British spy to sound. Hoping to hear more from Kit Carradine.

Also, the narrator is brilliant.

this book is very good, and the narrator is excellent. i dont like the audible versions of Cumming's other books with a different narrator as much as this one. i hope this turns into a series of books with the same narrator.

I have read many of Charles Cumming's books, and highly recommend his latest. The story is interesting and topical, and it isn't totally clear until close to the end what happened. Very entertaining!

Charlie Anson's SUPERB narration proves Charles Cummings’ characters deserve to be played by A-List actors. In The Moroccan Girl, they interact in a dense but lucidly presented plot with all the covered paranoia essential to excellent spy fiction. Kit Carradine, son of a spy and successful author of spy thrillers, runs up against a wonderful cast of mysterious people whom he is awkward at understanding. Is the man who recruits him to MI6 so good at his job that no other agents are implicated? Is Lara Bartok, repentant terrorist, truly the victim of a psychopath? An international assortment of vivid cameo characters add to the suspense. Several Moroccan locales are marvellously portrayed, without romanticised or cliched exoticism. We travel with Kit through the gleaming luxury of tourists’ hotels and the tacky, ominously shadowed dives of 21st century North Africa, where Western tastes and decadence have prevailed. While we await the streaming series this novel should inspire, I recommend Cummings’ straightforward but highly descriptive prose.

One of the great modern spy novels, this story takes seemingly predictable events and transforms them into a riveting event. From beginning to end, this was thoroughly enjoyable.