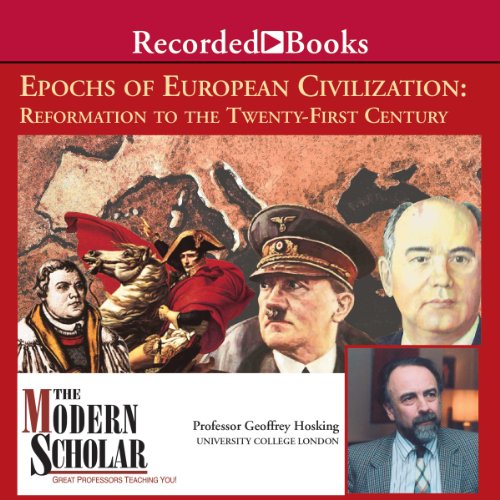 The period from the Reformation to the 21st century proved a time of radical change for Europe - and with the continent's far-reaching influence, for the entire world as well. In terms of religion, day-to-day home and work life, and national identity, this epoch of European history abounds with fascinating events that include everything from violent revolution and conflict to breathtaking scientific discoveries.

This course provides a greater understanding of the role played by such influential figures as Luther, Calvin, Napoleon, Stalin, and other key figures of the period. Further, the importance of the Enlightenment, the Industrial Revolution, the rise of the nation-state, World Wars, and the Cold War is expounded upon in a lively analysis bound to shed new light not only on world history, but on the present state of the world and the future of global politics.

All the history you've forgotten from high school, and more, is presented wonderfully in this series of lectures. A great introductory or refresher course, and good for piecing it all together. Geoffrey Hosking is easy to listen to—never stuffy or overbearing. At some points I would wish for more detail, but this book really does cover a large span of time. Very worthwhile.

If only teachers had told history this way!

Professor Hosking deserves a big kiss on both cheeks for having made my recent training runs at least mentally enjoyable! 16 hours (for both parts) of European history, told in the most melodic British English - highly recommendable! Especially for someone like me, with gaping holes in history knowledge due to uninspired teachers and Soviet-centred curriculum...

Another winner from Modern Scholar. Easy and enjoyable to listen to. A decent introduction to the subject. .