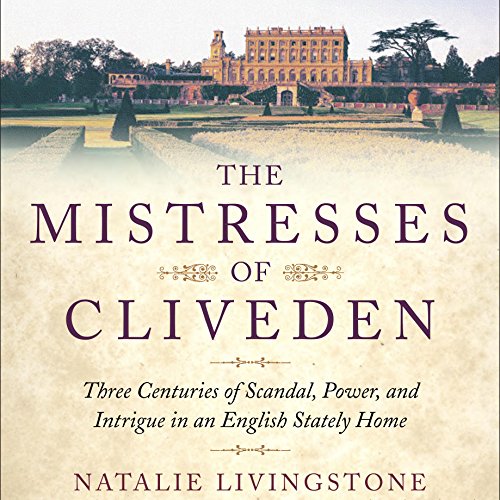 The Mistresses of Cliveden

By: Natalie Livingstone
Narrated by: Elizabeth Knowelden
Try for $0.00

For fans of Downton Abbey comes an immersive historical epic about a lavish English manor and a dynasty of rich and powerful women who ruled the estate over three centuries of misbehavior, scandal, intrigue, and passion.

Five miles from Windsor Castle, home of the royal family, sits the Cliveden estate. Overlooking the Thames, the mansion is flanked by two wings and surrounded by lavish gardens. Throughout its storied history, Cliveden has been a setting for misbehavior, intrigue, and passion - from its salacious, deadly beginnings in the 17th century to the 1960s Profumo affair, the sex scandal that toppled the British government. Now, in this immersive chronicle, the manor's current mistress, Natalie Livingstone, opens the doors to this prominent house and lets the walls do the talking.

Built during the reign of Charles II by the Duke of Buckingham, Cliveden attracted notoriety as a luxurious retreat in which the duke could conduct his scandalous affair with the ambitious courtesan Anna Maria, Countess of Shrewsbury. In 1668 Anna Maria's cuckolded husband, the Earl of Shrewsbury, challenged Buckingham to a duel. Buckingham killed Shrewsbury and claimed Anna Maria as his prize, making her the first mistress of Cliveden.

Through the centuries other enigmatic and indomitable women would assume stewardship over the estate, including Elizabeth, Countess of Orkney and illicit lover of William III, who became one of England's wealthiest women; Augusta of Saxe-Gotha, the queen Britain was promised and then denied; Harriet, Duchess of Sutherland, confidante of Queen Victoria and a glittering society hostess turned political activist; and the American-born Nancy Astor, the first female member of Parliament, who described herself as an "ardent feminist" and welcomed controversy. Though their privileges were extraordinary, in Livingstone's hands, their struggles and sacrifices are universal.

Cliveden weathered renovation and restoration, world conflicts and cold wars, societal shifts and technological advances. Rich in historical and architectural detail, The Mistresses of Cliveden is a tale of sex and power and of the exceptional women who evaded, exploited, and confronted the expectations of their times.

Praise for The Mistresses of Cliveden

“Theatrical festivities, political jockeying and court intrigues are deftly described with a verve and attention to domestic comforts that show the author at her best.... [Livingstone’s] portraits of strenuous and assertive women who resisted subjection, sometimes deploying their sexual allure to succeed, on other occasions drawing on their husband’s wealth, are astute, spirited, and empathetic.” (The Wall Street Journal)

“Lively.... The current chatelaine — the author herself — deserves no small credit for keeping the house’s legend alive.... Any of her action-filled chapters would merit a mini-series.” (The New York Times Book Review)

“Though the personal tales and tidbits are fascinating, and the sensational details of these women’s lives will intrigue Downton Abbey devotees, the real star of the story is Cliveden.” (Booklist)

“Lovers of modern English history and the scandals that infiltrated upper-crust society will find much to enjoy in this work.” (Library Journal)

"Well-researched, well-written and narratively enthralling.... Romance, sex, scandal and political intrigue have been central to the history of the house for more than three centuries and Mrs. Livingstone...has chronicled it all with scholarship, readability, wit and a fine eye for telling detail." ( Evening Standard)
"[A] wide-ranging and deliciously enjoyable biography of one of England's grandest country houses.... Livingstone interweaves the huge panorama of three centuries of British history.... But at the heart of the book, the seductive power of the house itself affects each generation of women." ( The Telegraph)
"Her scholarship is considerable and yet she wears it lightly, producing a book which is always lively, entertaining and immensely readable." ( Daily Express)

What listeners say about The Mistresses of Cliveden

What disappointed you about The Mistresses of Cliveden?

What lover of historic fiction and Downton Abbey could resist this book after reading the Publisher's Summary promising an "immersive historical epic", "scandal, intrigue, and passion". Having listened to most of it (could not bring myself to finish) I must, unfortunately, say that it didn't deliver at all. The narrating was fine, but the book, to me, was more of an insipid reciting of facts. Such a pity, I was really excited to listen to it.

The narrator gave an irritating, monotone performance. Some extraordinary pronunciations of quite ordinary words in common use. Has she lived under a stone that she has not picked up how words are said?

I think the narrator's voice detracted from the story. The voice has a strange quality that fails to compliment the telling a historical tale.

this was a long book but it didn't seem long, that's how much I really enjoyed it. and the narrator was excellent.

I found it dull, rambling, and hard to finish . The title to me is misleading. The book talks about political issues, more than the mistresses.

interesting story, but poorly written or poorly read. not sure which made it boring and monotone. like highschool research paper.

Great listen. Though I was stationed nearby, never realized the treasure in my own backyard.