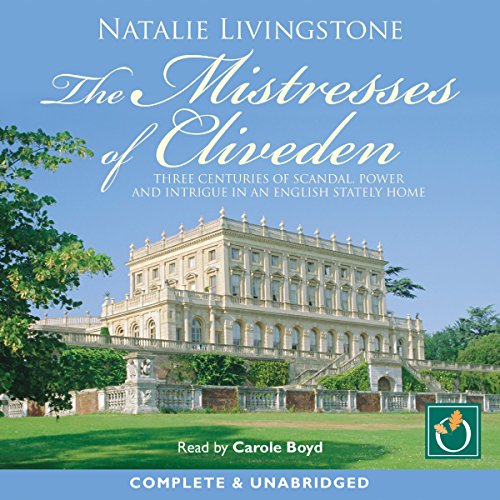 The Mistresses of Cliveden

By: Natalie Livingstone
Narrated by: Carole Boyd
Try for $0.00

From its dawn in the 1660s to its twilight in the 1960s, Cliveden was an emblem of elite misbehaviour and intrigue. Conceived by the Duke of Buckingham as a retreat for his scandalous affair with Anna-Maria, Countess of Shrewsbury, the house later served as the backdrop for the Profumo affair.

In the 300 years between, the house was occupied by a dynasty of remarkable women each of whom left their mark on this great house.

"Narratively enthralling...chronicled with scholarship, readability, wit and a fine eye for telling detail." (Andrew Roberts, Evening Standard)
"Her scholarship is considerable and yet she wears it lightly, producing a book which is always lively, entertaining and immensely readable." ( Daily Express)
"Wide-ranging and deliciously enjoyable...." (Juliet Nicholson, The Telegraph)
"Meticulously researched." ( Mail on Sunday)
"A fascinating journey through English social history, with Cliveden at its heart." ( Country Life)
"Fluently written, the book interweaves [these] personal stories with historical snippets illuminating each era and glimpses of life at the pinnacle of society.... The broad sweep through 300 years of social change is packed with plenty of colourful details that capture the heady essence of Cliveden and the bold, spirited women who shared its history." ( History Today)

What listeners say about The Mistresses of Cliveden

Much More Than A Book About A House

The thing I liked best about this book was the way that you hear all about the historical setting to each part of the 'story'. Each Mistress who lived in Cliveden is set in the context of the history to that era - social, economic and especially political history. It really did bring the story to life - and so of course, an awful lot of the book does not happen at Cliveden and often had nothing to do with the house, which was not what I was expecting but it worked so well.

I was far more gripped by the more recent eras of the house - the last one was really Nancy Astor and this was by far the most interesting to me. I thought I admired her (first female MP etc) but it turns out she was a fascinating but rather nasty piece of work with ingrained antisemitic views, among other unpleasant things!

The narration was excellent. Just familiar enough, as if you are being confided in, not over-acted by the brilliant C Boyd (Linda Snell, The Archers).

Thoroughly entertaining and well researched narrative, which flows very smoothly, thanks to the melodious tones of the reader. I've read widely on the subject yet there was more to learn here. The book combines erudition and humour very cleverly and is clearly written from the heart.

I found the attempts at accents annoying. If I read a book I do not need accents

A Delightful Romp through Scandal and History

A great listen!!!! If you like your history with more personal insight to its protagonists then this book is for you. An engaging and interesting listen

Enjoyable mix of history and gossip

I enjoyed this account of the lives of the female inhabitants of Clivedon spanning 5 centuries set against the backdrop of English/UK political and social history. Surprisingly the author often writes of the English King/country after the union of the crowns and joining of the Scottish and English parliaments no wonder we Scots fees marginalized! I'm left with the feeling that in many ways little has changed in the UK. An aristocratic/ wealthy elite still pull the strings, get the plum jobs and own much of the land and wealth a lot of which was originally bestowed on their forebears who fought for or bedded a Monarch.
Carole Boyd (the Archers Linda Snell) is an excellent choice as narrator.

I found it an interesting book but was somewhat irritated by the reader and her style and how her voice dropped in certain places.
A book that shows that lives are not necessarily very happy and certainly mothers from Cliveden don’t come out of it very !

I really enjoyed this but no I wouldn't listen to it again. I would read it though. The house itself has a wonderful history and it's fascinating to hear about it, but the narrator seems to be trying to turn it into some kind of drama - swooping and emoting all over the place. She treats it as if it were a work of fiction and it gets very, very annoying very, very quickly. I would far rather that she had simply read the book as a work of non-fiction. The story is dramatic enough without her trying to help.

This is a very well researched fascinating insight into much of British history, radiating out from one estate, with so many connections to prominent people of the day.

The author clearly explains the context of each era but never makes the information too heavy or 'intellectual'. She reminded me of some history I had forgotten, but better still I learned a good deal that I had never known or understood before.

I always enjoy Carole Boyd's reading as she has a very relaxing pace and a clear understanding of the book and its characters. My one small criticism this time is that she occasionally dropped her volume too low to be comfortably heard, even by someone who's just passed a hearing test!

In short, I thoroughly enjoyed this book and shall listen to it again before too long.

A fascinating insight into the life of a stately home, and the mistresses of the house, from the 17th to 20th centuries. This book covers two centuries of royal connections with the house, and a century of the political and personal intrigues of the Astor family. The story is fast paced and highly entertaining. The only criticism I have is that I found the narrator rather irritating, but this is probably a matter of personal taste.

Absolutely fascinating history of this stunning house. I was lucky enough to marry here and so it has a special place in my heart. To hear all of this history really made it come to life. So much you don't know and surprises you. Highly recommended!