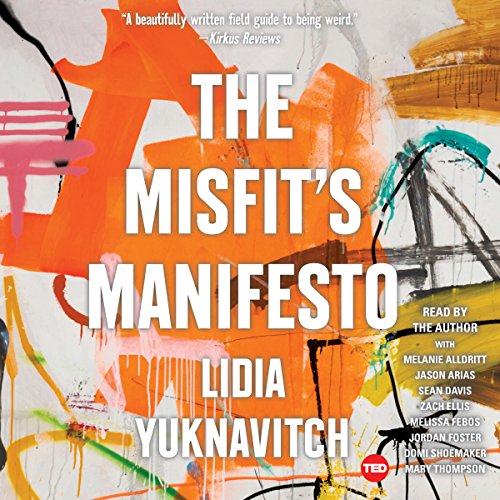 A self-defined misfit makes a powerful case for not fitting in - for recognizing the beauty, and difficulty, in forging an original path.

A misfit is a person who missed fitting in, a person who fits in badly, or this: a person who is poorly adapted to new situations and environments. It's a shameful word, a word no one typically tries to own. Until now.

Lidia Yuknavitch is a proud misfit. That wasn't always the case. It took Lidia a long time to not simply accept but appreciate her misfit status. Having flunked out of college twice (and maybe even a third time that she's not going to tell you about), with two epic divorces under her belt, an episode of rehab for drug use, and two stints in jail, she felt like she would never fit in. She was a hopeless misfit. She'd failed as daughter, wife, mother, scholar - and yet the dream of being a writer was stuck like "a small sad stone" in her throat.

The feeling of not fitting in is universal. The Misfit's Manifesto is for misfits around the world - the rebels, the eccentrics, the oddballs, and anyone who has ever felt like she was messing up. It's Lidia's love letter to all those who can't ever seem to find the "right" path. She won't tell you how to stop being a misfit - quite the opposite. In her charming, poetic, funny, and frank style, Lidia will reveal why being a misfit is not something to overcome but something to embrace. Lidia also encourages her fellow misfits not to be afraid of pursuing goals and tells them how to stand up, how to ask for the things they want most. Misfits belong in the room, too, she reminds us, even if their path to that room is bumpy and winding. An important idea that transcends all cultures and countries, this book has created a brave and compassionate community for misfits, a place where everyone can belong.

What listeners say about The Misfit's Manifesto

This is it - this is all of it in words. Such an important book for anyone who has ever felt as if they don’t fit.

Full of kindness and understanding. Wise and thoughtful. Vital. I am so thankful for this book.

it should be required reading

A necessary, timely book. Every word, every voice are important. Misfit or not, read it.

This book is a heal-from-within where a Victor Frankel-meets-real life victims and if they agree to “serve the time” they are liberated into the same world that tried to lock them up but— NOW THEY’RE FREE and their purpose is to set others free thru the common pain with all experience. The content and quality is beyond great!

I really enjoyed listening to this book. I discovered Lídia on her tedtalk about misfits. Her style of writing is raw and beautiful at the same time. I am inspired to write my story. Even though I may not meet all the characteristics of a misfit, I think just being human at times makes us misfits depending on the life experiences we live. I’m looking forward to reading her other books as this was my first book. Highly recommend it.

I love this book.And it is more relevant than ever.
So there. Onward. Sideways.
Excellent.

I see this people and I hear them and I can relate, but they are ahead of me in finding their outlets, and so I still felt a little left behind.

I love Lidia, Must listen for the odd and unusual

Powerful, Relatable. It's wonderful to hear the each author voice their own body stories. It really makes difference for the experience of the content of this book. For Misfits and for those who love, wonder and maybe even judge them.

A book I needed my entire life

I've never before read a book so relevant to me. Truly. I don't even know what to say to recommend it to anyone else. To me though, it allowed me to understand myself and accept myself as weird and messed-up as I am. To see myself as something other than a failure and even other than a "survivor," a term others call me that never meant much of anything to me. I've read so many psychology and self-help and motivational books and they don't come close to this amazing work. I've studied the psychology of developmental trauma in-depth in my MFT program, and I was fulfilled to notice that what I learned was all echoed here... Except this builds on it, this presents an answer to "what then?" I wish I could give a free copy to every person on earth. This is one I'm going to come back to again and again.

This book broke my heart...

I really enjoyed this book. It was read by the author which added to the emotional complexity. It's a story of Lidia's life that's painfully honest and full of hope.

I was intrigued by the potential subject matter, but the narration by the individual speakers, and more specifically the lead narrator are very.
Everyone sounds like drugged up hippies.

What a great book. I now know what I am.
For years, I felt different, didn’t understand why . Now I know. It’s been a great comfort, this book.