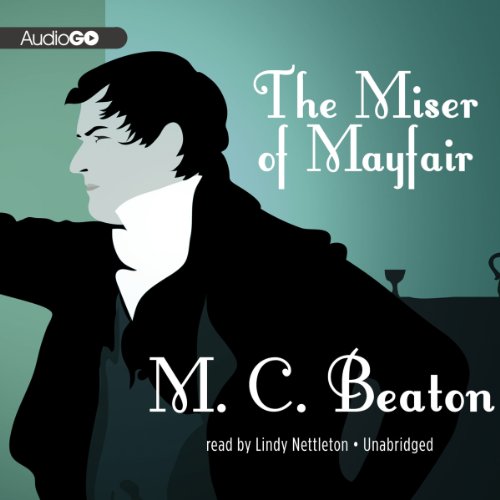 The Miser of Mayfair

The Miser of Mayfair

By: M. C. Beaton
Narrated by: Lindy Nettleton
Free with a 30-day trial

Is Number 67 Clarges Steet the unluckiest house in Mayfair? Every season the beau mondes of the Regency would hire a house in the heart of London’s fashionable West End at disproportionately high rent for often inferior accommodation and yet Number 67 Clarges Street, a town house complete with staff, remains vacant from year to year. Could it be that it is associated with ill luck and even death? Something must be done so that the servants of this house don’t lose their livelihood.

Salvation seems to come in the form of Roderick Sinclair who confirms he wishes to rent the house for the current season. The staff is overjoyed - until they find that Mr. Sinclair is a terrible miser who is planning no parties. Furthermore, his ward, Fiona, though a dazzling Highland beauty, does not seem to possess one bright idea in her head. But it is Rainbird, Number 67’s clever and elegant butler, who sees through her facade and resolves to help his mysterious mistress in whatever way he can.

What listeners say about The Miser of Mayfair

M.C. Beaton has created a wonderful cast of characters and Lindy Nettleton has brought their personalities to life through her performance. I have enjoyed these books very much. The upstairs/downstairs storyline is excellent.

The Miser of Mayfair - one of my favorite listens

This is the first in a series which Audible doesn't carry in entirety, which was a terrible blow. In this first book, a skinflint drunkard 'inherits' a young woman from a deceased uncle. He rents a London house which is available at a shockingly low price because, unbeknownst to him, it has an unlucky reputation, even though the address is good. The staff is top-notch and excited the house has been rented for the season until they learn the new master of the house is a cheapskate. Fortunately, the young woman is singularly resourceful - making dresses from the curtains and out-gambling the gambling queens of the ton. She changes all their fortunes - especially downstairs. It's a great story with an odd twist at the end. Highly recommended. Hopefully Audible will get the rights for the rest of the tales soon.

If you could sum up The Miser of Mayfair in three words, what would they be?

No, but there were a few that made me laugh, particularly the carriage chase. It was a perfect vehicle (no pun intended) for the cast of characters to once again remind you of their parts in the tale.

I started with Hamish Macbeth and progresed to Agatha Raisin, loving every book of both series. I just found the "House" series and can't believe I actually read and liked a romance! Mysteries are my favorites, but Beaton/Chesney captured my attention once again. I don't know if I'll continue with the series, since I found so many others that she's written, but I'm really glad I read "The Miser of Mayfair". I met some delightful new characters and found myself enjoying a genre I have shied away from for many years. It must be the writer, right?

Looking forward to the rest of the series. Easy romance with an interesting heroine and a smart hero. M. C. Beaton tells good stories. Lindy Nettleton is a good narrator.

I absolutely HATED the ending

This is just a fluff, average regency romance. I don't expect great literature, just a relaxing read. It fulfilled that requirement up to the end. I HATED the ending of the book. I don't want to spoil it for anyone who actually wants to read it, though. I am glad I got this through Kindle Unlimited. If I had paid money for it, I would be even more annoyed.

I really enjoyed this. It was light, fun. and exactly what I needed. I broke a couple of ribs and I've been feeling pretty cruddy and this book was a fun little romp to take my mind off things. I will be continuing with the series.

these are a good group of short light little romances.
Good reads for a vacation or a rainy day

I found the story to be simplistic and the characters one dimensional. also the narrator was choppy and stilted.

Charming in every way

I loved the quaint story, the entertaining array of characters and the lilting reader’s voice. Lindy Nettleton was well-cast as the narrator and she seldom dropped a word or phrase or mixed up her subtle differences in tone and accent among the dozen or so characters. I recommend this book and reading to anyone wishing to be charmed rather than thrilled or excited. What the experience lacked in battle scenes or car chases it made up for in light farce.

it was a little weird

I did not like how the book turned towards the end. it was just um, a little weird. like the author was trying to put in unnecessary sexual tension but just made the "hero" a big fat turd. like really, that pretty much ruined the book.