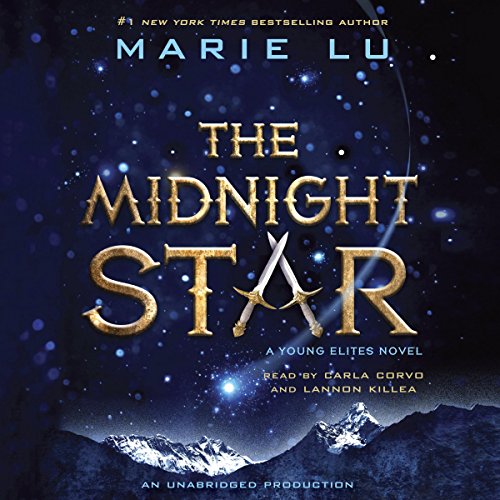 By: Marie Lu
Narrated by: Lannon Killea,Carla Corvo
Try for $0.00

There was once a time when darkness shrouded the world, and the darkness had a queen.

Adelina Amouteru is done suffering. She's turned her back on those who have betrayed her and achieved the ultimate revenge: victory. Her reign as the White Wolf has been a triumphant one, but with each conquest her cruelty only grows. The darkness within her has begun to spiral out of control, threatening to destroy all she's gained.

When a new danger appears, Adelina's forced to revisit old wounds, putting not only herself at risk but every Elite. In order to preserve her empire, Adelina and her Roses must join the Daggers on a perilous quest - though this uneasy alliance may prove to be the real danger.

“Lu pivots from the ‘coming of age via romance’ formula to pry apart the many emotions that pass under the rubric of love...There’s nothing easy here, for Adelina or readers - there are no safe places where the pressures of betrayal, death threats, and rejection aren’t felt.” (Publishers Weekly, starred review)

"Readers should prepare to be captivated - and to look forward to a continuation of the Young Elites series.” (Booklist, starred review)

What listeners say about The Midnight Star

I don't usually react this way to a series I've read and enjoyed, from an author I like. But this book made no sense. It felt completely disjointed, with absolutely no resolution to all the main story lines - just dumb gimmicks to explain away everything that happened in books 1&2. I feel cheated. I've invested time listening to this series - I even re-listened to the first two books prior to this one. And now I wish I hadn't bothered.

the worst one in the trilogy

in my opinion this was the worst book in the trilogy. The voice acting was grating. I would say even more grating then it was in the first book. the second book was probably the best not only in terms of writing but in terms of the voice acting as well. honestly everything about this particular installment was a bit of a letdown.

can't tell if this installment is worse than the others or if I just don't like the series... also the narrator is just cringy and the writing is bad (bordering on fanfictionesque)...

This story brings our heroine full circle in a character arc the writers of Dexter and Game of Thrones (the show) could learn from.

Great series but the ending, really? Nooo. I won't give it away, you must read.

Wonderful ending to a wonderful trilogy.

It really all makes sense in the end, and resonated beautifully. Don't pass up on this trilogy! The world and characters are remarkable, up untill the very last page.

Only book series I can read over and over again.

I dislike reading so much but after reading the young elites for high school, I became addicted. The storyline is of an antagonist which I love. It's written so well I cried and will probably everytime I read the end of this series. The development in the main character is done so well I am attached to her. So happy to find Marie Lu's books.

I will always enjoy legend the most out of all of her books but I did like this series a lot as well. the narrator for this series I thought did a great job reading these books.
also this was my first time reading a anti hero story which I also found to be a little too depressing for my taste but the story was overall a good read.

When I picked up The Midnight Star, I was hesitant. The Rose Society already had me questioning Adelina, so to some extend I was already confused about what I really wanted. I didn't know if I was going to like or dislike Adelina in this final installment in The Young Elites series. I had to take some time to think after reading The Rose Society before picking up The Midnight Star. This series had me questioning so much.

Once I started reading this novel, my fears came to life. Lu created a narrator that I did not like whatsoever, and I think this is a very tricky thing to do. The way she creates this narrative, one will either support or be against Adelina. I grew myself disliking her as the story progressed. However, my disliking her did not make me want to stop reading any less. This is why this series confuses me. I don't know how Lu does it, but she somehow created a series that had me questioning my alliance to the narrator so much! Yet, I still want to keep reading more. Perhaps it is my wanting to know if my alliance to change that kept me so invested in this series.

However, I will admit that I did not change my alliance. I disliked Adelina throughout. Now I can see how others would have liked/disliked her at times but in the end be satisfied with her. But to me, I don't know. I guess she didn't meet up to the standards Professor Snape set. I mean he's the only character I know that I dislike the whole series until the end. Adelina's actions in the end did not (in my opinion) reach enough of a redeeming quality to have me change mt mind in the end. I HIGHLY recommend your reading this final novel in the series to make your own judgement. To me, the ending was satisfying enough, but my dislike for Adelina reigned through the whole series.

Corvo and Killea do an amazing job in bringing this third novel to life. I really enjoy when the same narrators tell the same series. I form such a connection from the original narrator that it kind of throws me off when different narrators are used in the same series. Corvo and Killea do excellent narrating the entire series. For those of us who like to multitask and listen on the go, I recommend listening at a 2.0 speed, so one does not miss anything. For those who are listening while reading the book, I found  3.0 speed to be the best speeds. 3.5 speed was too fast for me, and I was missing a lot of what the narrator was saying and had to eventually slow down the narrator's reading speed.