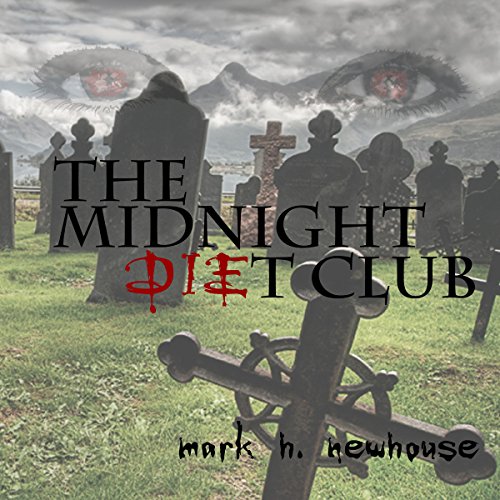 By: Mark Newhouse
Narrated by: Darren Marlar
Try for $0.00

Some kids would risk almost anything to be thin, popular, and stop others from teasing them.

But would you join the Midnight Diet Club?

Esme is a slightly overweight teen-age girl who is hounded endlessly by three sinister bullies. In her quest to find acceptance she almost loses her soul in this funny, slightly scary, twist on vampire legends.

What listeners say about The Midnight Diet Club

Skinny bully vamps are the worst!

Esme and her mom are on the outs with each other. She wants Esme to be thin and popular. But the recent divorce of her parents has Esme in emotional turmoil and so she turns to food. Her mom puts her on one crazy diet after another and nothing seems to work. The kids at school, with the exception of 2 friends, bully her all the time. The story opens with one scene after another of bullying in various forms and the tactless, yet well-meaning, things adults say to teens. Finally, there is an incident during PE class that sends Esme over the top; the three chic thin and cruel girls take advantage of this incident, pushing Esme even further. Pretty soon, we have vampires and a Dr. Ghoulash clashing with Esme’s desire to be thin and popular.

This story starts off a bit slow with the bullying scenes, one after the other. But that also set up the scenery for the rest of the plot to walk in. Esme is pressured by everyone (except her two friends) to lose weight, and to do it quickly. At age 12, that is a lot of pressure. Throughout the beginning, we see Esme being pushed around, not making decisions on her own. But then a spark shows and she tails one of the thin, vampire girls (Pam) after dark one night, catching a glimpse of the secret the three guard. Using this secret as leverage, she forces her way into their circle and meets Dr. Ghoulash. Then she goes back to being pushed around and manipulated until the final scene of the book. Esme didn’t strike me as particularly intelligent or heroic, but more of a lucky protagonist that got out of this scrape intact.

There was a lot of focus on her weight and, while that was definitely integral to her motives, after a while it felt like I (and Esme) was being hit over the head with it. Was there anything else to her character? She loves chocolate, is fat, her parents are divorced, she’s overweight, she is good at geometry, needs to lose weight……While it was a bit repetitive for me to listen to, I can also see that it showed the listener just how desperate Esme was to fit in; and to do that she had to lose weight.

This is one of those stories with a moral. As Esme hangs around the vampires more and more, she leaves her friends behind, even pushing them away, and starting to think harshly of them. I am sure you can guess how this book ends (in rough outlines) and Esme learns that true friendship is more important. I was hoping that Esme’s mom would learn a lesson too, as she comes off as pretty shallow (but perhaps that will happen in a sequel).

The characters were pretty one dimensional with only Esme showing a little growth. The plot was predictable mostly because the characters were predictable. Also, and this is just my personal bit, the character name ‘Dr. Ghoulash’ made me think of a dish my mom made frequently when we were growing up. So I automatically connected the big bad villain with a tasty meal. I guess everyone has to eat. But for me personally, that made the big Baddie more comical than dangerous or scary. Still, with all that, it was a quick listen and brought me some entertainment.

The Narration: I am curious as to why the author picked a male reader for this book as like 70% of the characters are female. While Marlar was able to do accents and had different male character voices, several of his female character voices lacked femininity and also sounded alike. He did do a decent job of injecting humor and sadness at the appropriate places.