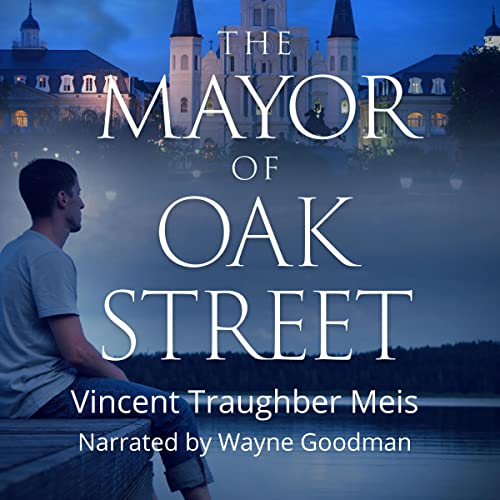 The Mayor of Oak Street

By: Vincent Traughber Meis
Narrated by: Wayne Goodman
Try for $0.00

In the 1960s, Midwestern boy and Boy Scout, Nathan delivers newspapers and mows lawns. Nathan uses his cover to move about yards and sneak into the homes of his neighbors, uncovering their secrets.

In high school, one of the local misfits introduces him to diet pills, which help him overcome his shyness. In an amphetamine high, he meets Cindy, who he hopes will steer him along the “morally straight” path of the Boy Scout Oath he swore to.

Nathan is infatuated with a young doctor down the street, Nicholas (Dr. B), who embodies all the things his mother would love him to be. On one of his secret forays in Dr. B’s house, he hides in a closet and witnesses his idol having sex with man while the wife is out of town. Dr. B’s affair leads to tragedy, forcing the doctor to leave town.

Nathan has a chance encounter with Dr. B, who has moved to New Orleans. Dr. B is in a relationship, but still closeted. Frustrated by Dr. B’s cool reaction, Nathan goes on a six-month binge of amphetamines and anonymous sex. On one night of debauchery, he overdoses and ends up in the emergency ward.

Nathan’s near death rallies Dr. B and Nathan’s other friends to force him into rehab. On the way home from work, Nathan witnesses the gruesome aftermath of the 1973 Up Stairs Lounge fire that devastated the gay population of New Orleans. As a result of the fire, Dr. B’s live-in boyfriend leaves town, freeing Dr. B to explore his feelings for Nathan.

What listeners say about The Mayor of Oak Street