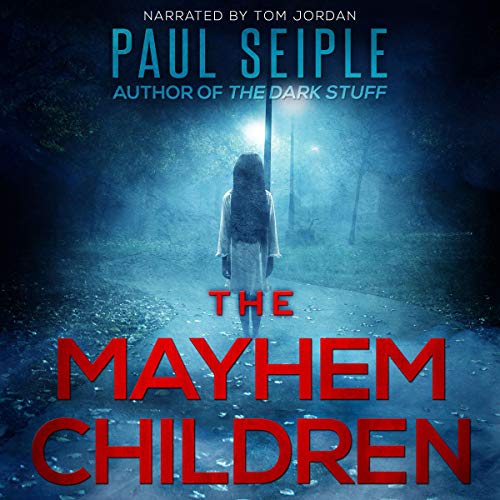 Six children disappeared. Psychopath Elvin Hayes was convicted and executed for the presumed murders. He went to his grave with the secrets of what happened to the children dubbed The Silent Six.

Thirty years later, the six are no longer silent. A curse has been summoned. The children have come home to play a demonic game called The Mayhem. Detective Kim Strode must find out who conjured The Mayhem before it destroys everyone connected to the case.

There’s one major problem. Kim is connected. Her father sent Elvin Hayes to the electric chair.

The Mayhem Children, a terrifying tale of witchcraft, demons, and revenge, is an ode to classic 80s horror.

What listeners say about The Mayhem Children

The story is good and never let up..it kept you keep listening wanting to know more...the characters are great each with a.strong personality.. Great narration.

Buckle up for chills and thrills with this one...

This was my first book by this author and I am already looking for more. What a great start to a new series. This story follows Detective Kim Strode and her partner, Detective Terrence Simms, as they have their world rocked by the realization that all their training has not prepared them for the paranormal threats their community must face in the wake of an unspeakable and heinous act of brutality in which six children were murdered, but no bodies were ever found. Prepare for a fast-paced, full-throttle experience as these detectives and some paranormal experts work to unravel the mystery of what happened to these children, why their families are now being driven mad by malicious visitations from the children, and who could have had the motive and knowledge to conjure the evil that now plagues their community. You won’t want to put this one down once you start it, so grab your favorite beverage, settle into your favorite chair and dive into this compelling and utterly creepy tale. If you choose to listen to the audio version of this story, you are in for a treat. The narrator, Tom Jordan, gives another of his amazing performances in this story. He is always good at distinguishing various characters with his voice but in this one, the voice of the Mayhem demon will send chills up your spine. The combination of a skilled and highly imaginative writer and a gifted narrator giving a stellar performance made this story a completely enjoyable experience that I would recommend to anyone partial to the genre. I sure hope there will be more adventures with these wonderful characters.
NOTE: this is a chilling story revolving around the death of children but there is no disturbingly graphic violence, no foul language, and no sex.

I received a free copy of this audiobook and I am voluntarily offering this honest and unbiased review.

If you find this review helpful, I thank you for so indicating.

Years after six children go missing and the man responsible pays for his crimes, horrifying things start happening to the families involved. This story was creepy in all the right ways. I never knew when something was going to happen to any of the characters, so remained tense, always expecting the worst. If this were a movie, there would be a lot of dark scenes involving music with sudden jump scares and frenzied action. The author did a good job of drawing me into the story, had me wanting to know what would happen next ,and uncertain as to how it would all end. This story made me feel a lot of emotion throughout. I will admit that tears were involved at one point. I gasped aloud a few times and cringed in sympathy for a character several times. I will definitely be looking for more works from this author. The narration was well done. You could feel the differences in the characters personalities as well as easily distinguish between the different characters. There was suitable emotion in the voice. I enjoyed listening to this narrator.

I couldn't stop listening to this book...it gets you from the very beginning all the way to the end...I believe this book is movie worthy

I really enjoyed this paranormal mystery crime story. Good narration, easy to follow along and try to solve. Interesting story.

Suspend belief,because it seems easy,even to police in this book!A series of childrens killings comes back to haunt the people involved in the killers execution.I loved it!It was fast paced and fun! Tom Jordan was a really good narrator! I was given this free review copy audiobook at my request and have voluntarily left this review.'

Now, if you like a good ghost story, try this book. The story is ok, perhaps not perfect, but good. What makes this audiobook great is the narration - it's live, vivid and vibrant, the voice is simply fantastic and it makes you wanting for more!

A spooky, thrilling, jaunt through the paranormal

The Mayhem Children is a spooky, thrilling, jaunt through the paranormal. I loved the detailed descriptions and could just picture the horror. The narrator, Tom Jordan did a great job delivering a multitude of spine-tingling voices that made this book a real thrill. Five stars!

While I did enjoy this book a lot, there wasnone question which seemed to be left unanswered to me. From the story I can guess at the answer, but I am the type of person who likes things to wrap up all neat and tidy. Still worth listening to.

I love a good horror book. I also love listening to a new (to me) author and narrator. I enjoyed the story. It was a bit creepy. I really liked the storyline and the paranormal level was strong in this story. It was a pretty fast-paced story. There was several characters but I never felt like it was too much to keep up with. I was a bit bummed out with the ending. I guess I had it built up in my head that it was going to be this demon vs human epic battle… it wasn’t. So I was a bit let down with the ending.

The narrator Tom Jordan did a good job with the story. He was able to excel with the demons voice but not really the children’s voices… however, I appreciate the narrator not approaching something he may not have felt like he could have pulled off. Jordan did a pretty great job with building up the tense feelings and making the listener see the unbelievable!

Well written and narrated. I will be look for more from the author or narrator.

A chilling, well written story. Listened to it within a few days. Enjoyed the spooky tale! Narrator was good and portrayed different characters well.

Worth a listen and will look out for other books by this author!

Such a great listen! Very well written, enough going on to keep you interested throughout, great characters and fantastically narrated by Tom who’s able to really express the mood and suspense with some great character voices! Really hope there’s more in the pipeline!
This is my honest opinion of a free review copy.

Read this in a couple of sittings. Good mixture of crime and spooks. The narrator kept me interested. Will read more from this author