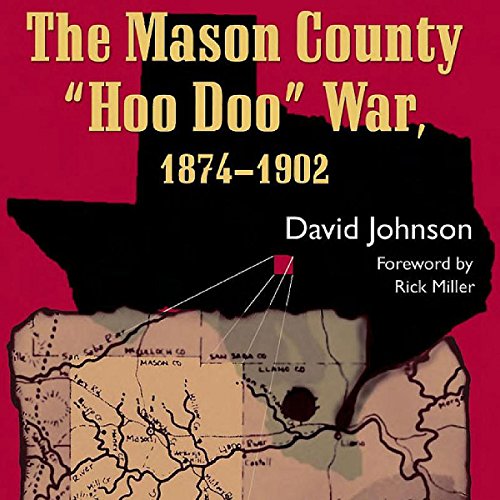 By: David Johnson
Narrated by: Joseph Tabler
Try for $0.00

In 1874 the Hoo Doo War erupted in the Texas Hill Country of Mason County. The feud began with the rise of the mob under Sheriff John Clark, but it was not until the premeditated murder of rancher Timothy Williamson in 1875, a murder orchestrated by Sheriff Clark, that the violence escalated out of control. His death drew former Texas Ranger Scott Cooley to the region seeking justice, and when the courts failed, he began a vendetta to avenge his friend. In the ensuing months, Sheriff Clark's mob ambushed ranchers George Gladden and Moses Baird, which drew gunfighters such as John Ringo into the violence. Local and state officials proved powerless, and it was not until the early 1900s that the feud burned itself out. David Johnson analyzes the myths and legends surrounding the feud and presents the first definitive account of what happened in Mason County-a case study in frontier violence of the bloodiest kind. The author analyzes the myths and legends surrounding the feud that began with the rise of a mob and escalated to premeditated murder. The Hill Country feud drew gunfighters of the era such as John Ringo and involved the Texas Rangers before it burned itself out in the early 1900s.