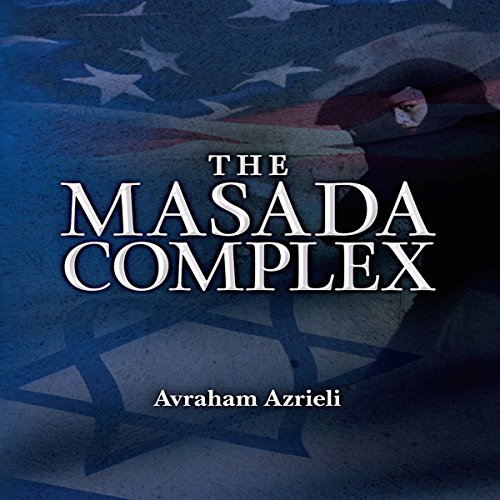 By: Avraham Azrieli
Narrated by: Steven Cooper
Try for $0.00

Could a major scandal cause the United States to terminate its support for Israel? The Masada Complex, a contemporary thriller set in Arizona, Washington, and Israel, gives us a chilling portrayal of exactly such a scenario. The novel's unforgettable hero is Masada El-Tal, a beautiful Israeli expatriate who grew up on a kibbutz by the Dead Sea and served in an IDF elite unit. But her charmed life was struck by disaster after 25 years. She left Israel for Arizona and has built a new life, earning a reputation as a prizewinning investigative reporter. But her latest story causes the suicide of a US senator, and an unprecedented wave of anti-Semitic violence sweeps across America.

While an angry Congress prepares to enact legislation to suspend all military aid to Israel, a mysterious organization attempts to assassinate Masada in order to stop her relentless investigation. As the clock ticks, her friends turn out to be enemies, and those she has maligned come to her aid. And the truth Masada uncovers exceeds her worst nightmares. Like the Jewish homeland she has left, Masada must overcome her moral dilemmas in order to defeat her mortal foes and save her people from destruction.

"A first-rate thriller with exciting plot twists and engaging characters." (David Liss, author of The Whiskey Rebels and Conspiracy of Paper)
"As good as DeMille and Follett! The Masada Complex delivers fast pace, brilliant plot, unforgettable characters, and a mesmerizing premise. Terrific!" (Stephen J. Wall, author of The Morning After and The New Strategists)

What listeners say about The Masada Complex

There were times I was ready to just stop this and get another book. The story is very much about the issues we see today in the middle east. Turmoil between nations and turmoil in a nation. It was too strong in expressing opinions about the powder keg that exist there.
At times you took one side over the other and at other times my view flip flopped. It is not an easy situation in that part of the world and as long as no one is willing to compromise it will continue to be a dangerous area.

I liked having an interesting, complex female character, that was driven with goals but at the same time she showed a side that not only neede help, and recognized that she needed to be wise in her choices

Would you recommend The Masada Complex to your friends? Why or why not?

I liked most all of the book... Wouldn't everyone make minor changes in any book they read?

Did Steven Cooper do a good job differentiating all the characters? How?

Yes, at least I thought so.... Differences in human nature

Could you see The Masada Complex being made into a movie or a TV series? Who should the stars be?

I really enjoyed the twists and turns of this book. The characters made you love them or hate them. The only thing I did not like was the very few times a scene went too long and I found myself getting irritated and thinking "ugh just get on with it". However, overall I really enjoyed the duplicity.

Only Rabbi Josh had faith and hope.the other two main characters were too full of hate and had not moved on.very depressing book.well written though but I personally did not like the story at all.good scenic descriptions of Israel.fantastice narration.

Story good, but the monotone voice of the reader made it very hard for me to stay with the story.

Unlikely in the extreme

From beginning to end this is the most unbelievable piece of rubbish I have ever read. As you keep,reading you will think it must improve; alas it doesn't.