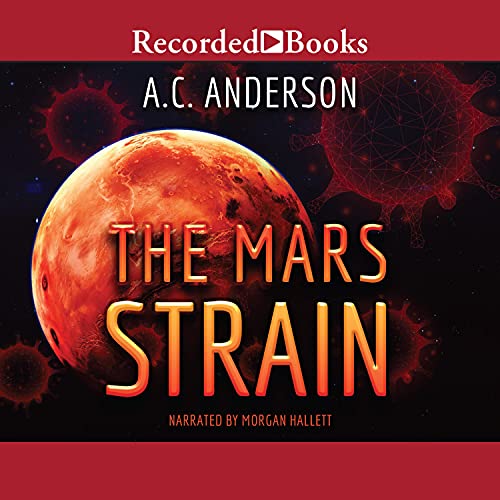 By: Alexia Chantel,A.C. Anderson
Narrated by: Morgan Hallett
Try for $0.00

We’ve colonized Mars, but we never should’ve come back.

When the first astronauts of the Mars Colony returned to Earth, they brought a mysterious, metal box they had found half-buried in the red dirt, called the Mars Cube. The scientists assigned to uncover its secrets tested it, scanned it, tried to blow it up, and everything in between. Then they accidentally opened it.

Biosafety level-4 laboratories, BSL4, hold the most deadly viruses on the Earth, and Juliet handled them daily. Her research at the CDC landed her a position on the Mars Cube Investigative Team in the world’s only BSL-5 lab. The only drawback: Her ex was one of the astronauts that brought back the Cube.

What was held inside the Cube shouldn’t have gotten out. It shouldn’t have ever been exposed to our planet because the Mars Strain is now loose and killing at a 100 percent mortality rate. Juliet is fighting for our very existence, Jake is working with the Mars Colonists to decipher the Cube’s holographic message for a clue, and someone wants to take over the Mars Program for themselves. They’re all watching the clock, and it's about to run out.

What listeners say about The Mars Strain

Not just for sci-fi fans!

The storyline is engaging and easy to follow. There is sci-fi and plenty of action. I enjoyed the multiple points of view and getting to know the characters. The author is detailed in her descriptions, giving the reader a vivid picture in their mind of the story as it progresses.
The narration is excellent. I found it easy to know which character was speaking based on the changes in her voice. She definitely brought the images to life.

The descriptions are so vivid I can picture the movie! This Alien organism mystery captures the reader’s (or listener’s) attention and doesn’t let go.

Could I have read this last year? No, a virus that kills everyone within hours, yikes! Too scary. But now, yes now it works. We are far enough into this pandemic for me to go into pandemic book territory.


A cube is brought back from Mars, I guess there was life on Mars after all. But then people start to die, horrible deaths. It is fast and it is ruthless, and as we know people are idiots and it spreads. Pandemic, The Mars strain.


First, the how and when of the cube was really interesting and I would have loved to learn more. So intriguing.


Thrillers are not something I read a lot, they have to speak to me. Ánd I am glad I gave this sci.fi a chance, though to be honest the tech med talk is not my biggest fav to be honest, but it still worked well. It was the fight against the clock. Either everyone dies, or they stop it. I was pulled in and the stakes kept getting higher.


As for the characters, we really could have done with a Juliet during covid, she is one smart woman.


I enjoyed it, it got really dark at one time and I wanted to know how it would turn out.


Good narrator, distinct voices and she kept up the thrilling pace of the story. This is one for audio. A thrilling ride that keeps you wondering.

This is an awesome thriller that hooks you from the get go! There's quite the character development without detracting from the ongoing story line. This in turn had me heavily invested in these characters and what happened to them. It was gripping! I've never had a story payout so vividly in my head before. The book is impossible to put down! I have to believe this will be a movie someday as it has all the right qualities for an awesome big screen hit! Download today, you won't regret it!

This was a great story and great listen about a pandemic that hits from Mars! I enjoyed the scientific detail that showed the author knows what they are talking about, it brought a level of realism to the story. It’s easy to see yourself or your friends in these characters, they were authentic and relatable. A worthwhile listen when you want an escape, perhaps on your next road trip or just working around the house. (Also, Morgan Hallett lends a great voice to the story)

Grabs you and pulls you in!

I loved this book! I was looking for something to listen to during my long commute; I will admit this is not my “normal” genre of books to read/listen to, but by a few chapters in I was hooked! The details are perfectly laid out and you really get to know the characters and the storyline. I found myself thinking and out and wondering what was coming next and was sad when it was over (because I didn’t want it to end) - definitely recommend!

This was an interesting near future scifi novel that blended together hard science into a page turning thriller. Published in 2021, this book will appeal to the post pandemic crowd who are fascinated by the deadly power of viruses. Yet, I don't think this book was particularly triggering since the setup was different enough from the real life pandemic we have all lived through.

Written by a "lab girl", this novel offered a near to life idea of what could happen if an alien virus were to be discovered on Mars. As a piece of fiction, the book still required some suspension of disbelief regarding alien life, yet remained generally grounded in scientific principles.

There was a romantic relationship that played a central role to the storyline. Personally, I tend to dislike these subplots, but I found this one was handled taking away focus from the main crisis.

Overall I enjoyed this novel. I got the opportunity to listen to audiobook version, which had excellent narration. I would recommend this one to anyone looking for a new scifi thriller with a compelling narrative.

Disclaimer: I received a copy of this book from the author for review.

Needs to Become a Movie!

The Mars Strain is a gripping sci-fi story with elements of love and true friendship. I appreciated all the science interwoven in the story as well as the humor throughout- I laughed out loud more than once. The descriptions were so vivid throughout the entire book, allowing me to really feel like I was there with the characters. Although the scientific components really shine through, there are still many elements of relatable human relationships (both romantic and non-romantic) and emotions which helped me connect to the characters more deeply. It wasn't "TOO sci-fi", if you know what I mean. The Mars Strain is begging to be turned into a movie and the release time (in the middle of a global pandemic) couldn't have been more perfect. The narrator did a fantastic job accurately and consistently portraying the various characters. Well done! I am looking forward to seeing more of A.C. Anderson's work.